Reaffirming his advocacy of children’s literacy, James Patterson announced on Monday that he is offering every sixth grader in the New York City public school system a free copy of Middle School, The Worst Years of My Life. Co-written with Chris Tebbetts and illustrated by Laura Park, the 2011 novel from Little, Brown launched the Middle School series, which has 7.5 million copies in print. Patterson delivered news of the donation on the Today show on June 23, and attended an event that afternoon at the East Side Community School in Manhattan, where New York City Schools Chancellor Carmen Fariña made an announcement about the giveaway. 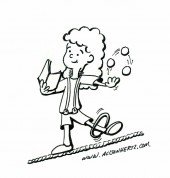 The Power of Doodling

How to Embrace Your Fears to Create Your Best Work