In the annals of human-animal comradeship, there is nothing quite like the tale of a brown bear cub named Winnipeg, Winnie for short, the inspiration behind A. A. Milne’s ‘Winnie-the-Pooh.’ She was bought for $20 by a Canadian soldier at the outset of World War I, sailed with him to England, then ended up living out her years at the London Zoo. There, a little boy named Christopher Robin took a shine to her, renaming his own stuffed bear Winnie and prompting his father to write the classic children’s books. As a new picture book by Sally M. Walker plays it, this is a “gee-whiz” kind of story, with one improbable, satisfying moment after another and little to no conflict. Jonathan D. Voss’s sweetly realistic, nostalgic watercolor illustrations go down easy as well, casting a benign glow even over scenes of army life during wartime. The little brown bear is adorable and affectionate, winning the heart of every human she comes into contact with, and her owner, Harry Colebourn, is a paragon of kind, virtuous, never-say-never manhood. Though Winnie earned her place in history accidentally, Walker’s storybook narration makes her legendary status seem well deserved, even preordained. 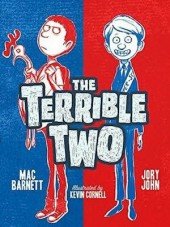 Review: The Terrible Two by Mac Barnett and Jory John

From the Notebooks of a Middle School Princess Writing Contest