In this interview:
• Watch as one of Paul’s characters stops by (he just couldn’t help himself!)
• Learn what a “flat” book is (you have them on your bookshelf!)
• Discover that a person can’t have too many moose shirts!

We have a Giveaway!
Win a Circle, Square, Moose  pillow, and signed copies of

Circle, Square, Moose  AND  Z is for Moose !

Bonus Material for NEWSLETTER subscribers – Exclusive footage from our interview with Paul O. Zelinsky.  Sign up for the KidLit TV’s Backstage Pass!

From www.paulozelinsky.com
Paul O. Zelinsky grew up in Wilmette, Illinois, the son of a mathematics professor father and a medical illustrator mother. He drew compulsively from an early age, but did not know until college that this would be his career. As a Sophomore in Yale College he enrolled in a course on the history and practice of the picture book, co-taught by an English professor and Maurice Sendak. This experience inspired Paul to point himself in the direction of children’s books. His first book appeared in 1978, since which time he has become recognized as one of the most inventive and critically successful artists in the field.He now lives with his wife in Brooklyn, New York. They have two grown daughters.

Among many other awards and prizes, he received the 1998 Caldecott Medal for his illustrated retelling of Rapunzel, as well as Caldecott Honors for three of his books: Hansel and Gretel (1985), Rumpelstiltskin (1987), and Swamp Angel (1995). 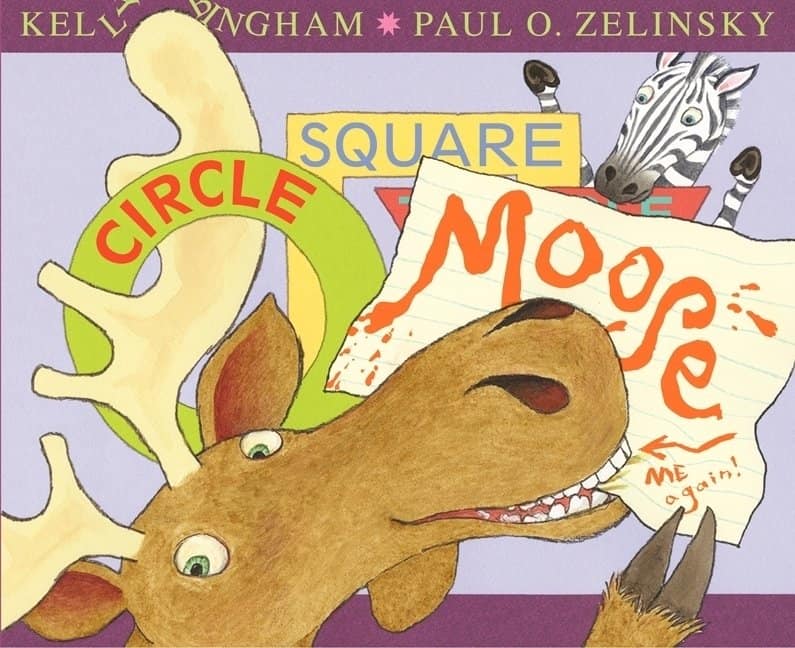 Circle, Square, Moose
by Kelly Bingham, illustrated by Paul O. Zelinsky
In this companion to the acclaimed Z Is for Moose, Moose infiltrates a book about shapes (because he loves shapes, naturally) and it is up to his best friend, Zebra, to restore order and save the day. Another triumph from the award-winning team of Kelly Bingham and Paul O. Zelinsky.

This hilarious book manages to illustrate a fact or two about shapes while providing a three-dimensional stomping ground for best friends Moose and Zebra. What will happen? Who will save the day? It’s all up in the air until the final page, where Moose and Zebra (and Cat, too) create a perfect—and perfectly heartwarming—ending. This stand-alone companion to Z Is for Moose features a multilayered story told through text, asides, conversation bubbles, and pictures. Themes of friendship, exploration, and conflict resolution—and of course the concept of shapes, including the shape of a book—make this an ideal read-aloud for the elementary school classroom and for home! 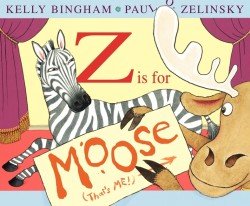 Z Is for Moose
by Kelly Bingham, illustrated by Paul O. Zelinsky
Caldecott Medalist Paul O. Zelinsky illustrates Kelly Bingham’s outrageously funny, critically acclaimed, and boundary-breaking story about a moose, a zebra, and the alphabet! Zebra wants to put on a show as simple as ABC, but Zebra’s friend Moose has other (unexpected and hilarious) ideas!

Zebra thinks the alphabet should be simple. A is for Apple. B is for Ball. Easy! But his friend Moose is too excited to wait his turn, and when M isn’t for Moose (Mouse gets the honor), the rest of the letters better run for cover. Exuberant and zany storytelling brings to life two friends and one laugh-out-loud comedy of errors that’s about friendship, sharing, and compromise. The incomparable Paul O. Zelinsky’s artwork is bursting at the seams—literally—with child appeal. Breaking the borders of the page, and creating the art both digitally and traditionally, Zelinsky turns convention on its head. The result is a picture book that is innovative, hilarious, and begging to be read over and over again. Named a Notable Book for Children by the American Library Association. 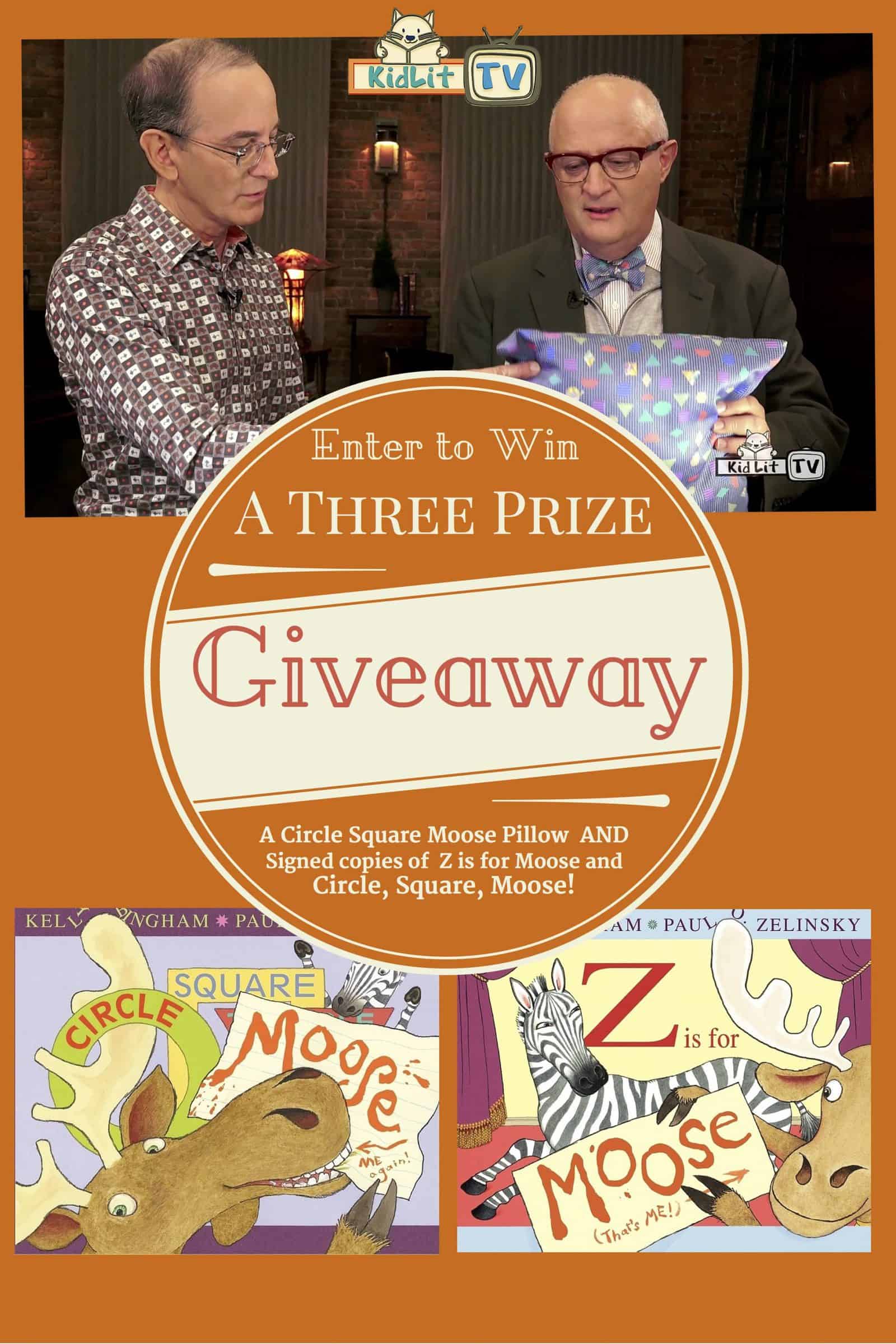 Wonderful! Thanks for the great giveaway.What a momentous occasion – we had Kelly Bingham (introduce MOMENTOUS a few months ago on our Word of the Week)! What a totally fun link up. Sharing now and we look forward to watching the full interview.

Even at 48 years old I get a kick out of Moose and Zebra! I no longer have small children, but I have shared these books with friends and our preschool. Fun to read out loud and here the children giggle and wonder what Moose is up to next. Love the author AND the illustrator!

Love these conversations. Hope I’m one of the winners.

Thank you and Good Luck, Taurean!

Paul is so talented and I’m excited he has had a successful career doing something he loves to do. He is an inspiration!

Rapunzel took years to create. When you take a look at the illustrations, you know why.

Moose come in all shapes and sizes. Just like people!

Love both these books! Always a hit with my storytime kids.

Paul must have been a Bullwinkle fan…I love meeses too!

Fascinating to discover that Paul did the illustrations for Dear Mr Henshaw! So different in style. Great interview!

Thanks for the chance to win a book!

I can not wait to read these. I have entered the giveaway. Thanks for an awesome opportunity.

Ohhh, I feel so lucky! Thanks so much for having this! I can’t wait to get my hands on this book!

How To Advertise Your Illustration / Artwork