It’s hard to believe it’s been 10 years since Shannon Hale released her Newbery Honor-winning Princess Academy, starring the whip smart, determined princess-in-training Miri. Hot on the heels of the anniversary, Hale returned to the Princess Academy universe with the third book of the series, The Forgotten Sisters, where the tables have turned and now Miri is tasked with training the next generation of potential princesses. But if you haven’t read these books, don’t get the wrong idea about princesses. These girls are crackerjacks, and as Miri will come to find out, some are a bit more rough and tumble than the palace is used to. 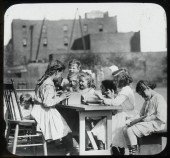