Dan Abbott is English, fourteen years old and the only child of a London plumber . He is good hearted but a tiny bit dodgy – he has been known to unlock stolen phones for an older friend. He doesn’t try very hard at school and he has no idea what he wants to do with his life. He has a happy, contented homelife, although things were difficult when he was little and his father did a short prison sentence for selling stolen goods.

Aliya is also fourteen but from Afghanistan. Her doctor father was killed in a Taliban bomb explosion and the shock and grief have plunged her mother into a deep depression. She has a younger sister Mina, who is four and an older brother Behrouz who worked as an interpreter for the British troops. Aliya is clever and determined. She works hard at school and has her heart set on becoming an engineer so she can help to rebuild her war ravaged country. Since her father’s death she has looked after her mother and taken over more and more of the household chores, including the cooking and looking after Mina.

Read more at The Overflowing Library. 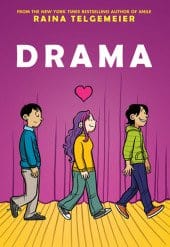 Roundtable: Why all the Drama about ‘Drama’?