Ovi, a character designer and story artist who lives in Portland, has been working in animation full-time for the past fifteen years for various studios, such as WB, Disney, Cartoon Network, and Sony — but mostly at LAIKA, working on both Coraline and The Boxtrolls. He’s not new to publication—his first published work was for DC comics back in 1998, and since then he’s published a comic book series and has illustrated a couple of picture books—but Just like Daddy (POW! Kids Books), out on shelves now, is his debut as an author-illustrator. It’s the story of one preschooler’s grand perceptions of his father’s day, juxtaposed with the everyday reality of his 9-to-5 job. It’s a warm story propelled by Ovi’s expressive cartoon art. 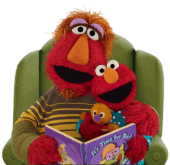 Reading with Preschoolers: Just Do It!

At Home by the Sea