Crocodiles are fascinating because they can look so dormant while remaining deadly. It’s pretty unusual ever to get the last laugh on one!

Few writers can better Roald Dahl’s incredible ability to evoke both fear and laughter in very young readers. The Enormous Crocodile is one of his most unredeemed characters in terms of his viciousness and in his directly stated threat to children. Having specified that for his lunch he “would like a nice juicy child” he goes on to extol the delights of eating children to his crocodile friend on the grounds that they are bigger than fish and so you get a better meal and that they are “juicy and yummy”. And he has very sharp teeth which show how easily he could do exactly what he is threatening.

Continue reading at The Guardian. 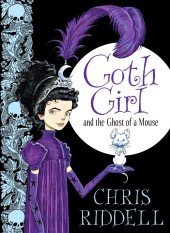 Book review: Goth Girl and the Ghost of a Mouse