Of all the most deserving, least lauded children’s book awards out there, my favorite might be The Phoenix Awards.  “The award, given to a book originally published in the English language, is intended to recognize books of high literary merit. The Phoenix Award is named after the fabled bird who rose from its ashes with renewed life and beauty. Phoenix books also rise from the ashes of neglect and obscurity and once again touch the imaginations and enrich the lives of those who read them.”  They’ve just announced the 2015 winner and I admit that I never read it (One Birdby Kyoko Mori).  There was a time, when I was young, when I tried to read as many Phoenix books as possible.  Someday, maybe, I’ll try again. 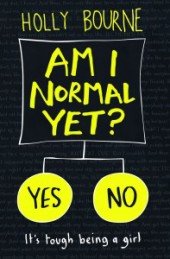 Top 5 Feminist YA by Holly Bourne, Author of Am I Normal Yet?