“Kids find their way to books like mine when they need to read about ordinary people who act in extraordinary ways.” – Tim Federle

Tim talks about his kid lit mentors, the joy of hearing from his readers, and he gives us a scoop about his next project: “The Great American Whatever”!

A Bundle of SIGNED BOOKS and AUDIO BOOKS from Tim Federle!

From IndieBound.org:
Tommy Can’t Stop!  Tommy bounces, and he leaps. Tommy clomps, and he bulldozes. Nothing tires Tommy out, and his family can’t keep up But then his sister has an idea: could tap class be just right for Tommy. This exuberant picture book, written by Broadway dancer Tim Federle, with illustrations by Mark Fearing, stars one very energetic kid who finally finds his place in the spotlight.

Five, Six, Seven, Nate!  Tim Federle is the award-winning author of the autobiographical novels “Better Nate Than Ever “and its sequel “Five, Six, Seven, Nate!”, which were named best books of the year by the “New York Times” and the American Booksellers Association, respectively, and called one of the best new middle grade series by “School Library Journal”. “The Great American Whatever “was inspired by an accident near Tim’s high school in Pittsburgh that changed the community forever. It is his first novel for young adults. Connect with the author on Instagram and Twitter at @TimFederle, and at TimFederle.com.

Better Nate Than Ever  A “New York Times” Notable Book of the Year, a “Publishers’ Weekly” Best Book of the Year, and a “Slate” Favorite Book of the Year. A small-town boy hops a bus to New York City to crash an audition for “E.T.: The Musical.”
Nate Foster has big dreams. His whole life, he’s wanted to star in a Broadway show. (Heck, he’d settle for “seeing” a Broadway show.) But how is Nate supposed to make his dreams come true when he’s stuck in Jankburg, Pennsylvania, where no one (except his best pal Libby) appreciates a good show tune? With Libby’s help, Nate plans a daring overnight escape to New York. There’s an open casting call for “E.T.: The Musical,” and Nate knows this could be the difference between small-town blues and big-time stardom.
Tim Federle’s “hilarious and heartwarming debut novel” (“Publishers Weekly”) is full of broken curfews, second chances, and the adventure of growing up–because sometimes you have to get four hundred miles from your backyard to finally feel at home.

ABOUT TIM:
TIM FEDERLE GREW UP IN SAN FRANCISCO and Pittsburgh before moving to New York to dance on Broadway.

His debut novel for kids,  Better Nate Than Ever — described as “Judy Blume as seen through a Stephen Sondheim lens” by Huffington Post — was named a New York Times Book Review Notable Book of 2013 and a Best Book of the Year by Amazon, Publishers Weekly, and Slate.com.

The sequel, Five, Six, Seven, Nate!, was named a Best Book of 2014 by both the American Booksellers Association and Amazon (and is now available in paperback, audiobook, and e-book editions).

Tommy Can’t Stop, Tim’s brand new debut picture book from Disney, with illustrator Mark Fearing, has been selected as a Spring 2015 Indie Next independent booksellers’ choice, and is out now.

Tim is also the author of the literary cocktail recipe book Tequila Mockingbird, which was voted the #1 Cookbook of 2013 on Goodreads (and was a clue on Jeopardy). His cocktail recipe guide for new parents, Hickory Daiquiri Dock, has been called “More fun at a baby shower than a Diaper Genie” by the Tampa Bay Times.

Profiles of Tim can be read in The New York Times, Atlantic Magazine, TIME Magazine for Kids, Entertainment Weekly, and CNN — and his press kit can be accessed here.

(You can also send him a note.) 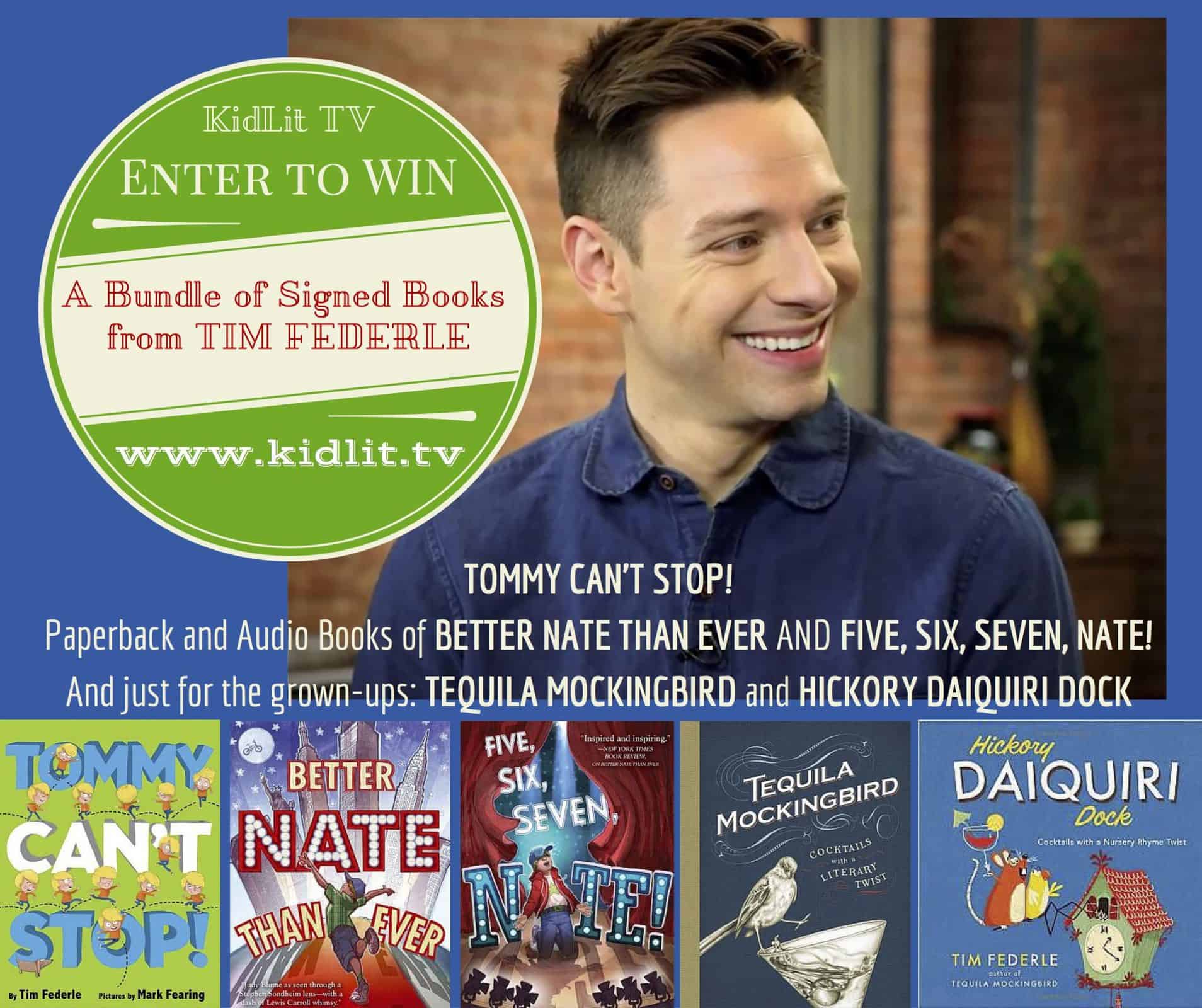 I used to be able to tap dance as a kid, I can still remember a little. :)

How did Rocco do, Sarah? Not bad for a first lesson!

Never tried, but have always admired those who can.

I “pretend” tap (shuffle around a bit and try my best to channel Gene Kelly!)

Oh my goodness you two! This is one of the best interviews. I’ve been smiling the whole time. I’ve given Tim’s drink books as gifts. I can hardly wait to take a road trip to listen to the Nate audio books. I loved Better Nate Than Ever when I read it.

Funny you mention that, I was thinking how planning a road trip so we could listen to these books might be a good idea!

What great fun! You guys make a great team.

Rocco tap dancing with Tim Federle: this is one for the “best of” reel!

I read Better Nate Than Ever and heard so much about the audio I listened to the sequel. I read it with my ears on a road trip. Thanks for keeping me awake. No tap dancing for me, but I wouldn’t count it out at some point. ;)

“Read it with my ears…” That’s a perfect description of an audio book! Thank you, Crystal!

I can’t take credit for the phrase. I saw it somewhere on Twitter, but I agree, it’s a great description for audio books.

I love Tim and his books! Took a tap dancing class when I was a kid, so I can shuffle-ball-step and that’s it.

Better Nate Than Ever rocks! Getting ready to start 5, 6, 7, Nate! and I am looking forward to reading the PBs!

Wow! So glad you are writing and there for our kids! I teach middle school and love that it’s in my library. You are an every day hero!

I can’t dance, but I have fun trying

I took lessons, but I was terrible!

StoryMakers in the Kitchen Emily Jenkins and Sophie Blackall Create A FINE DESSERT!