When the Supreme Court ruled on June 26, 2015 that same-sex couples could marry in all fifty states, I found myself, like many parents of young children, in the position of trying to explain the ramifications to my offspring. Newly turned four, my daughter needed a bit of context. After all, as far as she was concerned gay people had always had the right to marry so what exactly was the big deal here? In times of change, my back up tends to be children’s books that discuss similar, but not identical, situations. And what book do I own that covers a court case involving the legality of people marrying? Why, none other than The Case for Loving: The Fight for Interracial Marriage by creative couple Selina Alko and Sean Qualls. It’s almost too perfect that the book has come out the same year as this momentous court decision. 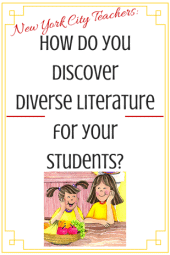 Teachers: How do you Discover Diverse Literature for your Students?