In free verse, Weatherford tells the story of activist Fannie Lou Hamer, who was known as the voice of the civil rights movement and fought for voting rights for African Americans and racial equality. Weatherford takes readers from her childhood in the Mississippi Delta all the way to her lifelong service award in 1976 from the Congressional Black Caucus. In between—and with great reverence and passion for her subject matter—Weatherford touches upon Hamer’s many accomplishments, including Mississippi’s Freedom Summer, her establishment of grassroots Head-Start programs, her work for the Mississippi Freedom Democratic Party, her appearance at the 1964 Democratic National Convention in New Jersey, and her efforts toward the passing of the Voting Rights Act.
There are many moving and quite powerful moments here. In a poem called “Black Power,” Weatherford writes: 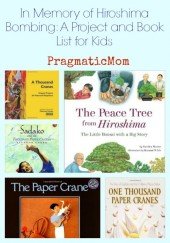 In Memory of Hiroshima Bombing Book List for Kids