“Weather is what connects us all; every single person on Earth.” — Janice Dean

The forecast for this week’s episode of StoryMakers is sunny with a chance of Janice Dean, the Weather Machine. The Fox News senior meteorologist and kid lit author introduced us to her patronus, Freddy. Freddy is a spunky little frog who loves forecasting the weather. Janice says, “Freddy has been forecasting the weather since he was a little tadpole. His first word was rain, and he was correct.”

After years of being asked to recommend books for children, about the weather, Janice created the Freddy the Frogcaster series to explain meteorology — the science of weather — to children. She wanted a book that was fun and simple, but captured the technical aspect of forecasting too. Janice enthusiastically told StoryMakers host, Rocco Staino, “Weather is exciting! They [children] want to know more about it.” Learning about weather helps to take the fear out of occurrences of inclement weather, including thunderstorms and blizzards.

Janice credits her illustrator Russ Cox with helping to bring the books to life. She is resolute about the importance illustrations play in the enjoyment of picture books. Even Kirkus Reviews noted each member of Freddy’s community has a unique face.

If you know a child who’s fond of science; especially weather, then watching this episode and reading the Freddy the Frogcaster series is a must.

BOOKS
Via barnesandnoble.com
Freddy the Frogcaster, Freddy the Frog loves learning about the weather, and he’s known for having the best predictions in town. But what happens when the town picnic is almost ruined by a storm that catches the local frogcaster by surprise? Freddie has to step in to save the day!

“The forecast is for frequent checkouts for Freddy during weather-study units.” — Kirkus Reviews

Freddy the Frogcaster and the Big Blizzard, There’s a blizzard blowing toward Lilypad and someone has to warn the frogs! Frog News Network meteorologist Sally Croaker is busy in the newsroom and Polly Woggins is preparing for live broadcasts in the snow. It’s up to Freddy the Frogcaster to spread the news and get everyone prepared for the snow storm!

“Beautiful written and wonderfully entertaining, Freddy the Frogcaster and the Big Blizzard was a huge hit in my home. As a mom, it warmed my heart to see my kids giggling about a ‘frogcaster’ and learning about science too! This book is a blizzard of fun for children.” — Norah O’Donnell, co-host, CBS This Morning

ABOUT JANICE
Canadian born Janice Dean is a senior meteorologist at Fox News Channel. Nicknamed the Weather Machine, Janice has had a fondness for the science of weather since she was a child: “I’ve always wanted to know the science behind things that happened in the atmosphere,” said Janice. She began her career in Ottawa, where she was the co-host of a morning radio show, reporter, and disc jockey. Prior to joining Fox she held several positions at radio and television stations, in Canada and the United States. Before her career in broadcasting, Janice was a bylaw enforcement officer in Canada.

Janice is the author of the Freddy the Frogcaster series of books, which teaches children about meteorology; commonly known as weather forecasting. To date, she’s published three (3) books in the series and two additional titles are in development.

Janice lives in New York with her husband and two sons. Janice is an avid snow angel creator. 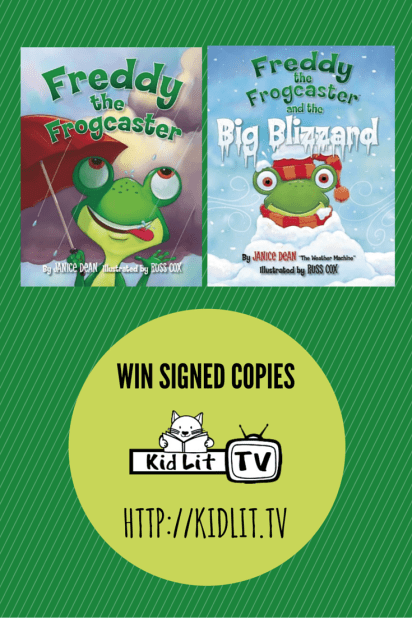 My favorite season is summer–I love the heat, the beaches, pool, and warm nights to walk my dog.

Thank you for entering, Danielle!

How to draw a Monarch Butterfly Real Easy