Steve Light | Have You Seen My Monster?

Do you wonder what teachers do with their spare time? Well, if you’re Pre-K teacher Steve Light, there is a good chance you’re creating yet another picture book. That’s right, after spending most of his waking hours with four and five-year-olds, he creates curious creatures and wondrous worlds for some of the youngest readers.


Steve’s Have You Seen My Dragon? and Have You Seen My Monster? are perfect books for preschoolers learning numbers and shapes. Zephyr Takes Flight is a fanciful look at the adventures of an inquisitive little girl whose imagination lifts her to new heights. Like all good teachers, Steve makes school seem more like fun than work.

Steve credits his elementary school librarian with helping to cultivate his love of stories and art. As a child, he found solace within the confines of his school library. After spending many days peering out a window, the librarian reached out to ask if he had any particular interests. From then on, Steve would find a stack of books waiting for him on the windowsill whenever he visited the library.

Stay tuned as StoryMakers host Rocco Staino delves into Steve Light’s creative process. What’s Steve’s preferred drawing tool? Why did he choose to tell stories in the first place, and how does it relate to his profession as a teacher? Also, find out how he’s contributed to The Eric Carle Museum of Picture Book Art.

Leave a comment below to get an extra entry in the Giveaway.

BOOKS
Via Indiebound.org
Have You Seen My Monster, In a follow-up to Steve Light’s highly praised “Have You Seen My Dragon?, “the county fair is filled with shapes and somewhere among them a monster is waiting to be found.

A little girl gallivants through a county fair, searching for her furry friend. Readers will surely spot the friendly monster as well as twenty shapes, identified here by their proper names trapezoids, ellipses, kites, and more hidden among iconic fair attractions from the fun house to the Ferris wheel. Maybe the monster is judging the pies? Or perhaps he’s at the monster-truck rally? Youngsters will be so mesmerized by Steve Light’s masterful pen-and-ink illustrations, decorated with vivid splashes of color, they won’t even realize they’ve learned how to spot a nonagon while looking for a monster.

Have You Seen My Dragon, Enter a fascinating, ornately drawn cityscape and help a boy find his dragon while counting objects from hot dogs to traffic lights.

In the heart of the city, among the taxis and towers, a small boy travels uptown and down, searching for his friend. Readers will certainly spot the glorious beast, plus an array of big-city icons they can count. Is the dragon taking the crosstown bus, or breathing his fiery breath below a busy street? Maybe he took a taxi to the zoo or is playing with the dogs in the park. Steve Light’s masterful pen-and-ink illustrations, decorated with meticulous splashes of color, elevate this counting book (numbers 1 20) to new heights. Maybe the dragon is up there, too

Zephyr Takes Flight,  Zephyr is a girl who loves airplanes. She draws pictures of them, makes them out of paper, builds them out of junk, and hopes one day to fly one of her own. But when Gramma, Daddy, and Mom are too busy to play airplane with her, Zephyr’s excess enthusiasm gets her sent to her room — where she discovers a secret door that leads to the most wondrous place she’s ever seen! Lovers of flying machines and gadgets, along with adventurers of all kinds, will be buoyed by this lighthearted tale of a little girl who finds her wings.

The Christmas Giant,  Humphrey is a giant, and Leetree, his best friend, is an elf. Together they love making wrapping paper for all of Santa’s presents. But this year Santa has asked them to grow a Christmas tree, and the pair couldn’t be more excited! They take great care with their project, planting and watering, snipping and pruning. Finally, the tree is wrapped and ready, and Humphrey and Leetree set off to deliver it. But when disaster strikes, the giant and the elf must come up with a way to make things right. From a small idea comes a big plan—and a surprise no one in Christmastown will soon forget!

An old ship. A sad friend. A button . . . An idea. Let’s SWAP!
In a young scalawag’s first tale of bartering, a peg-legged youngster sets out to help his captain repair his vessel. One button for three teacups. SWAP! Two teacups for four coils of rope. SWAP! And so it goes, until the little swashbuckler secures sails, anchors, a ship’s wheel, and more . . . including a happy friend. Steve Light’s intricate pen-and-ink illustrations, punctuated by brilliant blue and other hues, anchor this clever tale of friendship and ingenuity.

ABOUT STEVE
Steve Light is the author and illustrator of several books for children. When he isn’t writing, he’s teaching pre-k students in New York City. Steve is a collector of fountain pens; he has more than 80. When Steve isn’t writing and illustrating he can be found creating models — some of which are inspired by his books –, or carving storyboxes; wood dolls and props that fit in a box, which can be used to tell stories. Steve lives in New York City with his wife. 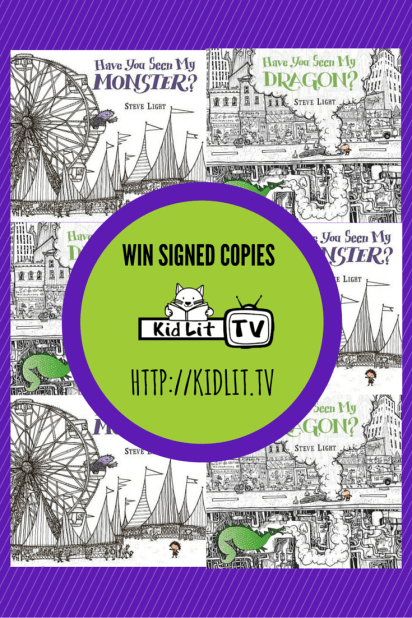 Thanks, Steve! The post has been updated to reflect your note. We can’t wait to celebrate SWAP!’s book birthday!

You’re welcome. I’m so happy you liked the interview!

great interview. I loved my librarian too.

Thanks so much, Rita! Yup, I’ve had some great librarians in my time too. Librarians can really shape a child’s love of reading.

Great book! I like that it looks like the adult colouring books that are all the rage these days. I am always looking for math connection books for my school library!

We adore Steve Light’s books. Yes, they do look like intricately designed adult coloring books (I have several). Steve was a Montessori teacher, which is one reason why he incorporated counting into “Have You Seen My Monster”.

I shared these books with my daughters, and they loved them. Thanks for the chance to win!

Fantastic, Jen! Thanks so much for entering. Keep your fingers crossed! Keep your girls reading and counting.

I love the way this book incorporates math and shapes!

Steve’s books look great because they are! :D

Same here! The team and I are really excited about SWAP! We love pirates; we hung out with a few this weekend. Okay, they were the Story Pirates, but pirates nonetheless.

We love these books! Thank you!

It’s true genius when you can make learning not only fun, but an event where kids beg for more. Brava!

Yes! He’s a bit of a genius for creating this series. Steve’s books are a fanciful, silly read, and fun to look at too!

Thank you, Jessi! We have more great interviews and other original programming, here: https://kidlit.tv/kltv-type/kltv-exclusives/.

Elementary school librarian here and I would love to add these amazing title to our school’s collection. Signed
= BONUS!

Hey Valerie! I’m sure your students would be super happy about that! Thank you for entering the drawing and GOOD LUCK.

Have just finished reading Have you seen my dragon? Such a wonderfully clever book. When I go to the library I always head to the children’s book section which is where I found your book this morning. Now I realize that you have written lots of other books which I am sure will be available for me to buy in Australia..