The KidLit TV team is a huge fan of book trailers, so we were so excited to be given the opportunity to premiere author Erin Petti’s book trailer for The Peculiar Haunting of Thelma Bee. Mighty Media Press worked with Erin in a collaborative effort and created the book trailer entirely in-house.

How Thelma Came to Bee

– A Book Trailer Breakdown for The Peculiar Haunting of Thelma Bee by debut author Erin Petti. –

Erin’s debut, Thelma Bee, publishes in September 2016. Erin is a ghost-story lover and has written a fun story for fans of The Goonies, Goosebumps, and Coraline. Thelma Bee is a fantastical adventure-mystery, where science and magic intertwine. Eleven-year-old Thelma Bee is never bored. In fact, she has curiosity and adventure in her blood. She spends her time running science experiments, practicing Spanish, and daydreaming about exotic landscapes. But Thelma gets more than she bargained for when a strange woman sells a jewelry box at her father’s antique shop. That night, a ghost kidnaps her father, and the only clue is the jewelry box and a word a ghost whispered in her ear: “Return…” Now it’s up to Thelma to get her dad back, and it might be harder than she thought—there’s someone wielding dark magic, and Thelma is pretty sure they’re coming after her next. 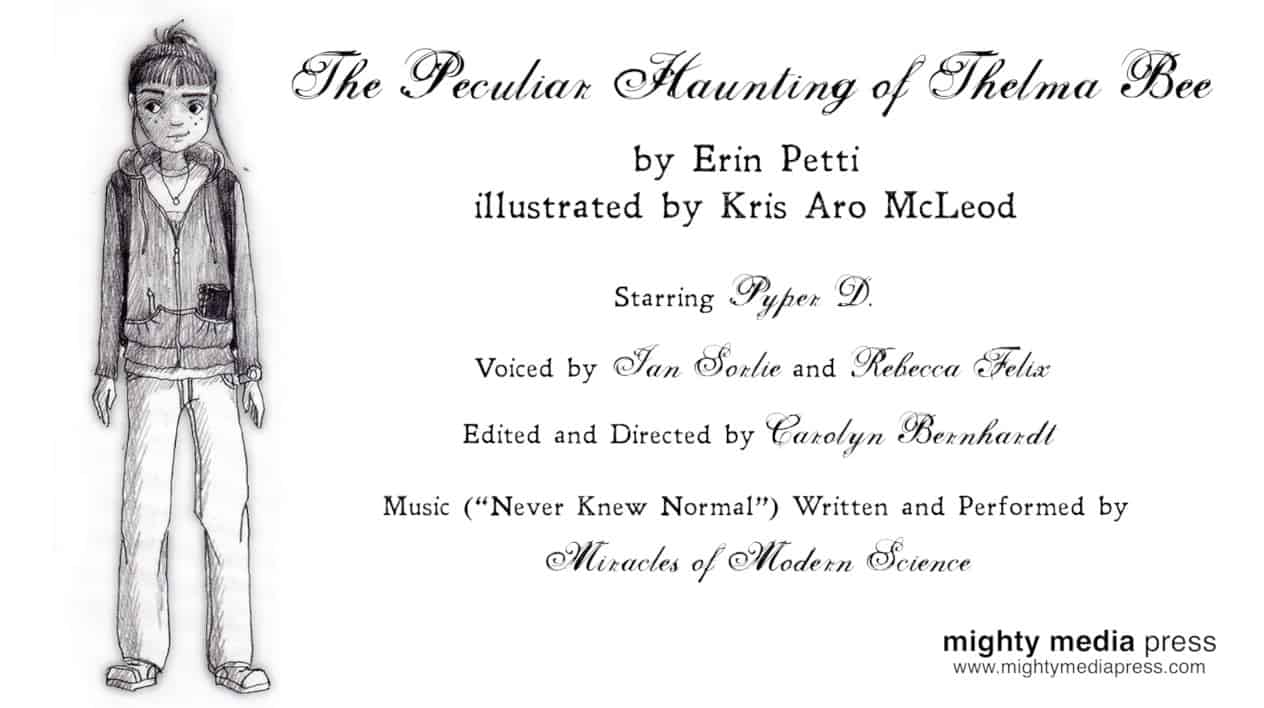 The Making of the Book Trailer

“To bring Thelma to life, we knew this trailer had to be live-action, with a catchy song that fit the book perfectly.” –– Mighty Media Press

Carolyn Bernhardt, who is a member of Mighty Media Press’ marketing team, studied film and worked with the indie pop band Miracles of Modern Science during her days at St. Olaf College in Minnesota.

The song “Never Knew Normal,” from their new album “Mean Dreams,” was the perfect choice—with sudden string bursts that match the haunting tension in Thelma and lyrics that speak to Thelma’s immersion in the paranormal world (“We never knew normal…”). –– Mighty Media Press

Carolyn filmed the trailer in Roseville, MN and edited it in-house. Mighty Media’s interactive content developer Ian provided the voice-over, and to make the trailer even more unique their content development manager Rebecca provided the end whispers. Everyone in the office recorded their voices in their “office studio”, so they could pick the best fit. Pyper, Mighty Media Press’ twelve-year old book trailer star who plays Thelma, was selected from the swim team Carolyn coaches.

The goal was to make this trailer feel more like a film trailer. There’s even an end credit scene! And we wanted to appeal to a large audience (from middle grade to adult), since the book contains something for everyone: dark magic, hauntings, humor, and a peculiar mystery.

KidLit TV is a big fan of the trailers Mighty Media Press creates and is extremely excited for the release of The Peculiar Haunting of Thelma Bee. Like Mighty Media Press we hope it inspires middle graders to be more curious and inquisitive about science.

How Rocket Learned to Read by Tad Hills