Are you wondering why Rick Riordan chose Boston as the location for Magnus Chase and the Gods of Asgard: The Sword of Summer? Do you want to know the names of Rick’s top three Norse gods? Watch this episode of Story Makers on Location to find out the answer to these questions and a few others.

Rick Riordan’s highly anticipated new book was released the same day Rocco Staino interviewed him, prior to a sold out Thalia Kids’ Book Club event at Symphony Space, in New York City. The author was greeted by a crowd of eager middle-grade readers, anxious to get their signed copies of Magnus Chase and the Gods of Asgard: The Sword of Summer, and excited to hear about Rick’s upcoming projects.

“I always try to write with the reluctant reader in mind. I love the voracious readers, but I also want to capture the kids that maybe have never picked up and loved a book.” — Rick Riordan

Parents and teachers will want to hear Rick’s advice on engaging reluctant readers. Rick has advice for aspiring writers, too.

We also have this interview with Rick Riordan now available via podcast. Now you can listen on the go! And if you’re looking for more Riordan, be sure to check out The Heroes of Olympus series review from Recovering Potter Addict.

We’re giving away three (3) signed copies of Magnus Chase and the Gods of Asgard: The Sword of Summer. Enter the giveaway below!

BOOKS
From BarnesandNoble.com
Magnus Chase and the Gods of Asgard: The Sword of Summer (Disney Hyperion, October 2015) – Magnus Chase has always been a troubled kid. Since his mother’s mysterious death, he’s lived alone on the streets of Boston, surviving by his wits, keeping one step ahead of the police and the truant officers. One day, he’s tracked down by a man he’s never met–a man his mother claimed was dangerous. The man tells him an impossible secret: Magnus is the son of a Norse god.

The Viking myths are true. The gods of Asgard are preparing for war. Trolls, giants, and worse monsters are stirring for doomsday. To prevent Ragnarok, Magnus must search the Nine Worlds for a weapon that has been lost for thousands of years. When an attack by fire giants forces him to choose between his own safety and the lives of hundreds of innocents, Magnus makes a fatal decision. Sometimes, the only way to start a new life is to die…

The world’s foremost expert in bringing ancient stories to life for modern young readers through fast-paced, hilarious, and high-stakes adventure quests turns to Norse mythology for the first time.

COMING 10/4/16! Magnus Chase and the Gods of Asgard: The Hammer of Thor – The second installment in Rick Riordan’s blockbuster Norse mythology series has Magnus and friends helping the god of thunder find his missing weapon before all Muspellheim breaks loose.

ABOUT RICK RIORDAN
From RickRiordan.com
Rick Riordan is the #1 New York Times bestselling author of the Percy Jackson and the Olympians series, the Kane Chronicles, the Heroes of Olympus, and Magnus Chase and the Gods of Asgard. He is also the author of the multi-award-winning Tres Navarre mystery series for adults.

For fifteen years, Rick taught English and history at public and private middle schools in the San Francisco Bay Area and in Texas. While teaching in San Antonio, Saint Mary’s Hall honored him with the school’s first Master Teacher Award.

While teaching full time, Riordan began writing mystery novels for grownups. His Tres Navarre series went on to win the top three national awards in the mystery genre – the Edgar, the Anthony and the Shamus. Riordan turned to children’s fiction when he started The Lightning Thief as a bedtime story for his oldest son.

Today over forty million copies of his Percy Jackson, Kane Chronicles, and Heroes of Olympus books are in print in the United States, and rights have been sold into more than 37 countries. Rick is also the author of The 39 Clues: The Maze of Bones, another #1 New York Times bestseller

Rick Riordan now writes full-time. He lives in Boston with his wife and two sons. 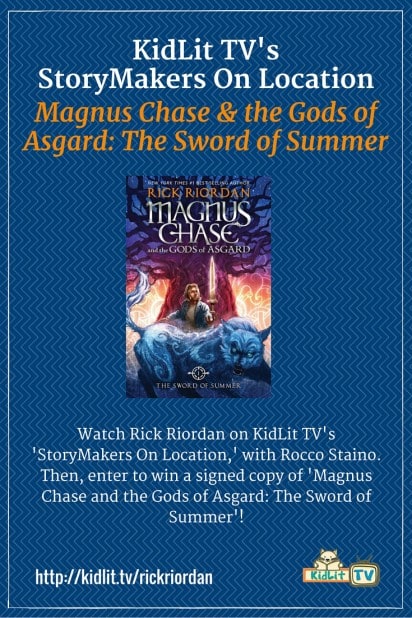 My son said Thor is his favorite but I kind of like that Loki.

Hi, all! Favorite Norse God….hmmm.. I remember when my daughter was studying Norse Myths she said they were more violent than Greek, so I didn’t jump in on much of it. I’ll just name Loki but can’t say I have a favorite. Darling Daughter was lucky enough to chat with Mr. Riordan a while back, virtually, thanks to HuffPostLive. He is a great guy. Love this interview!!

Can’t go wrong with any Rick Riordan book, really. :) Thanks for all you do, KidLit.TV!!!
~Christine

Oh yeah, the tales of the Norse gods is more brutal than that of their Roman and Greek counterparts. Loki is a personal fave.

Lucky young lady! Rick is very sweet. What was her favorite part of the interview?

Aw, Christine. You’re welcome. Thanks for being so supportive!

Hopefully, we can make your month! Best of luck!

Rick and Rocco…two of my favorite Kid Lit gods!

I’ll be sure to let Rocco know about this dazzling complement!

Loved your Percy Jackson series…and I look forward to delving into Magnus Chase! Thanks for sharing your creativity!!! :D

Great interview and looking forward to reading this book. I work with reluctant readers so I appreciate the tips. I am not good at favorites so I will say, Vör – goddess of wisdom, I would love to have all that wisdom.

Thor is my favorite

I would have to say Thor

I would love my reluctant reader to get a hold of this book. Thanks for the chance to win a copy.

i am unfamiliar with the norse gods, but I do like thor

I’m interested in learning more about Fria. A lady god of course & sponsor of our fave day of the week FRIDAY!

Yes! We’d love to see more books about female gods, too. Thanks, Kalani. I’ve heard Fria’s name before, but I didn’t know Friday was her special day.

I love all give-aways….books go to my middle schoolers!

Thor is his favorite

Thor is my favorite!

📺✨STAY TUNED! Have you ever wondered how to draw like a cartoonist? Well, you’re in luck! Join The New Yorker cartoonist Liza Donnelly for #ReadySetDraw as she shares her top tips for learning to capture the world around you through your drawings!✍️✨WATCH from 7AM ET TOMORROW! ... See MoreSee Less