Scholastic called 2015 the year of the library and to celebrate, KidLit TV took a trip to the Clark Public Library in Clark, New Jersey to interview many well known Young Adult, Middle Grade and Picture Book authors. During the interviews we learned why teens and kids would love these authors’ books, how schools and education are evolving, and how book ideas can be inspired by different media.

When her home is attacked by murderous vampires, 17-year-old Alexa is forced to leave her mother for dead in order to save her sister. She soon learns that she is the last known member of an elite race of supernatural Warriors, and is thrust into a world full of vampires and werewolves who all seem to regard her as some sort of savior. Meanwhile, Alexa battles a monster within herself that seeks to gain control; a monster that seeks blood.

The hidden city she finds herself in appears perfect, but Alexa’s instincts tell her that all is not right within its walls. When she is asked to attend a school of fighters, whose exams consist of gladiator-style competitions, she must decide who she can trust among the smiling faces. And, when she meets Kayden, a vampire she feels undeniably drawn to, she must decide if she can trust herself.

Until recently, the E’rikon have remained segregated in their city and ignored the few humans who have tried to engage them… but now they have taken Jax’s brother. To rescue him, she forms an uneasy alliance with a teenage E’rikon left stranded in the woods. She agrees to guide him to the city if he sneaks her past the human-proof barrier. Too bad it’s not that simple.

Jax, who cannot stand to be touched, finds that she’s drawn to the alien boy with bright green hair and jewel-like scales on his back. And he’s equally affected by her, the courageous redhead with haunted eyes. But she doesn’t know the alien’s true motives and he has no idea that she is much more than she seems.

With the aliens and the humans at odds, the connection forming between the two teens has consequences. What started off as a rescue mission sets a chain of events in motion which threatens not only the remaining humans and the growing alien society, but Earth itself.

Joseph Hashimoto is happy with his ordinary life. A man who believes in fairness and just action, Joe’s greatest love is his family. But as he moves about his days, he is completely unaware that his actions are carefully observed. With one momentous decision, Joe’s ordinary life is about to transform into an extraordinary existence.

While attempting to save a little girl from danger, Joe is killed in a violent explosion. Instead of dying, however, his soul is brought before the elemental Architects of the Universe, who tell him he has been chosen for a sacred duty. Reborn as Lightrider, the earthly representative of Light, Joe is given leadership of the Elemental Knights, a group of half-man, half-animal beings. Charged with maintaining a delicate balance between good and evil, Joe must police both sides and destroy anyone who threatens to ruin it. As Joe struggles with his conflicting emotions and longing for home, he must face his greatest threat—the ancient Chaos Demons.

In this fantasy tale, a man inadvertently thrust into a world of cosmic forces must come to terms with change and accept what needs to be done for the good of all.

Clicks – When you just know.

Clicks are the sounds the universe makes to tell you what will happen next. Truths you hear in your heart that you can’t explain.

For sixteen year old Cami, the clicks won’t stop. They’re telling her to fall in love with the wrong twin, that her family is hiding something, and that Pinhold, her pristine Island home, is in danger. It’s hard to trust them when they go against everything she knows.

But then an ocean mystery makes people sick, sinking the best swimmers to the seafloor and, while they’re not dead, they’re barely alive.

Modern medicine and island legends have no answers for Cami. Can she trust her instincts to find a cure, or will she lose the most important people in her life forever? 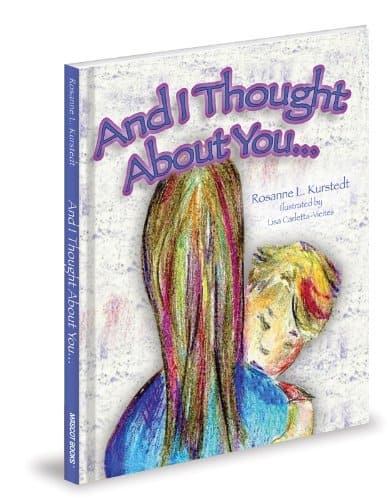 Rosanne Lerner Kurstedt And I Thought About You

And I Thought About You celebrates the relationship between a working mother and her child. It captures their mutual curiosity about what the other has done throughout the day while they re apart. The playful images of the mother at work, set next to the child’s daily activities, add to this warm and tender piece. And I Thought About You honors the unbreakable bond between mother and child.

In this fast-paced suspense, a group of privileged suburban moms amuse themselves by Googling everyone in town, digging up dirt to fuel thorny gossip. Caroline Thompson, devoted mother of two, sticks to the moral high ground and attempts to avoid these women. She’s relieved to hear her name appears only three times, citing her philanthropy. Despite being grateful that she has nothing to hide, a delayed pang of insecurity prods Caroline to Google her maiden name–which none of the others know.

The hits cascade like a tsunami. Caroline’s terrified by what she reads. An obituary for her sister, JD? That’s absurd. With every click, the revelations grow more alarming. They can’t be right. She’d know. Caroline is hurled into a state of paranoia–upending her blissful family life–desperate to prove these allegations false before someone discovers they’re true.

The disturbing underpinnings of The Memory Box expose a story of deceit, misconceptions, and an obsession for control. With its twists, taut pacing, and psychological tenor, Natiello’s page turning suspense cautions:

Be careful what you search for. 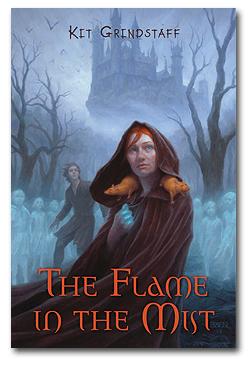 Kit Grindstaff The Flame in the Mist

Fiery-headed Jemma Agromond is not who she thinks she is, and when the secrets and lies behind her life at mist-shrouded Agromond Castle begin to unravel, she finds herself in a chilling race for her life. Ghosts and misfits, a stone and crystals, a mysterious book, an ancient prophecy—all these reveal the truth about Jemma’s past and a destiny far greater and more dangerous than she could have imagined in her wildest fantasies. With her telepathic golden rats, Noodle and Pie, and her trusted friend, Digby, Jemma navigates increasingly dark forces, as helpers both seen and unseen, gather. But in the end, it is her own powers that she must bring to light, for only she has the key to defeating the evil ones and fulfilling the prophecy that will bring back the sun and restore peace in Anglavia.

KidLit TV is always thrilled to visit local libraries! If you’d ever like us to stop by at your library’s author meet and greet event let us know and we’d be happy to stop by!

I enjoyed this very much! There are so many talented kid lit authors in New Jersey! Thanks for showcasing that talent.

Really amazing, Katya. The interviews were informative and fun. Can’t wait to read the books.