Maria Had a Little Llama/Maria Tenia Una Llamita and Knit Together author and illustrator Angela Dominguez creates heart-warming tales about family and togetherness. Angela Dominguez is a two-time recipient of the American Library Association’s Pura Belpre Honor (2014 and 2016).


It’s kind of a love letter to my mom.
— Angela Dominguez on “Knit Together”

Angela’s picture books are rooted in the themes of family, tradition, and friendship. Several of her books including Maria Had A Little Llama/Maria Tenia Una Llamita; Let’s Go, Hugo; and Knit Together pull from relationships with family members and artifacts from her childhood. A wind-up toy inspired French bird Hugo. Angela’s memories of wanting to be a skilled knitter like her mother led her to write a book to remind children they can be talented in their own way. An aunt’s interest in indigenous cultures informed the writing of a version of Mary Had a Little Lamb with a Peruvian twist.

Angela’s books aren’t only an option for children growing up bilingual; they are excellent for those who want to expose young readers to the Spanish language and Latino culture.

Aspiring illustrators will enjoy hearing about Angela’s process and seeing what a book looks like from start to finish.

We’re giving away three (3) sets of books from Angela Dominguez. Each set includes signed copies of Maria Had a Little Llama and Knit Together. Enter now!

From an award-winning illustrator comes a sweet story of mothers and daughters, drawing and knitting, and learning to embrace your talents just right for Mother’s Day. Drawing is fun, but knitting is better because you can wear it Knitting isn t easy, though, and can be a little frustrating. Maybe the best thing to do is combine talents. A trip to the beach offers plenty of inspiration. Soon mom and daughter are collaborating on a piece of art they can share together: a special drawing made into a knitted beach blanket. For every mom and daughter, this is an arts-and-crafts ode creative passion and working together.

Dominguez presents a humorous and endearing portrait of a stubborn French bulldog and a determined little boy.

Everyone knows about Mary and her little lamb. But do you know Maria? With gorgeous, Peruvian-inspired illustrations and English and Spanish retellings, Angela Dominguez gives a fresh new twist to the classic rhyme. Maria and her mischievous little llama will steal your heart.

Hugo is a dapper little bird who adores the Eiffel Tower — or at least his view of it from down here. Hugo, you see, has never left the ground. So when he meets another bird, the determined Lulu, who invites him to fly with her to the top of the tower, Hugo stalls, persuading Lulu to see, on foot, every inch of the park in which he lives instead. Will a nighttime flying lesson from Bernard the Owl, some sweet and sensible encouragement from Lulu, and some extra pluck from Hugo himself finally give this bird the courage he needs to spread his wings and fly?

Marta is “una nina,” an ordinary girl . . . with some extraordinary animal friends. As Marta explores the jungle, she knows she’s bigger than a bug, smaller than an elephant, and faster than a turtle. But then she meets the snake, who thinks Marta is “sabrosa” tasty, very tasty But Marta is “ingeniosa,” a very clever girl, and she outsmarts the snake with hilarious results. With simple Spanish and a glossary at the end, this fun read-aloud picture book teaches little ones to identify opposites and animals and learn new words.

How Do You Say? Como Se Dice? (November 8, 2016)
Written and illustrated by Angela Dominguez
Published by Henry Holt & Company

Hello “Hola.” Some people speak Spanish. Some people speak English. Although we may not speak the same language, some things, like friendship, are universal. Follow two young giraffes as they meet, celebrate, and become friends. This bilingual tale will have readers eager to meet new friends and “amigos.”

Pura Belpre Honor winner, Angela Dominguez, based this musically driven story on her beloved grandfather. Her abuelo always encouraged her to stay positive and carry on.

Via Angela Dominguez Books
Angela was born in Mexico City, grew up in the great state of Texas, and lived in San Francisco. She’s the author and illustrator of picture books such as Let’s Go, Hugo!, Santiago Stays, Knit Together, and Maria Had A Little Llama, which received the American Library Association Pura Belpré Illustration Honor. When she is not in her studio, Angela teaches at the Academy of Art University, which honored her with their Distinguished Alumni Award in 2013. She also enjoys presenting at different schools and libraries to all sorts of ages. Angela is a proud member of SCBWI, PEN America, and is represented by Wernick and Pratt Literary Agency. 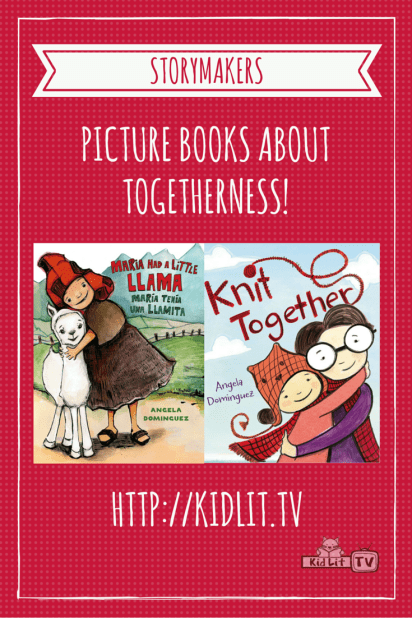