This Way Home is Wes Moore’s first young adult work of fiction, with Shawn Goodman. Moore and Goodman’s book is set in Baltimore, which has been in the news most recently due to several protests in response to police brutality. Elijah and his friends live for basketball but a street gang threatens to take that all away if the team doesn’t rep their colors. What happens if they don’t give in? What happens when a community takes a stand?

I want them [young people] to say, “He gets my life. He gets what I see. He understands what I know.”  — Wes Moore on writing This Way Home

Watch this episode to learn more about Wes’ books, what he is doing to further his service mission as a veteran, and how he’s making attending college a bit easier for young people in Maryland.

by Wes Moore
Published by Ember

For fans of “The Wire” and “Unbroken” comes a story of two fatherless boys from Baltimore, both named Wes Moore. One is in prison, serving a life sentence for murder. The other is a Rhodes Scholar, an army veteran, and an author whose book is being turned into a movie produced by Oprah Winfrey.

Two men. One overcame adversity. The other suffered the indignities of poverty. Their stories are chronicled in “Discovering Wes Moore,” a book for young people based on Wes Moore’s bestselling adult memoir, The Other Wes Moore.

The story of the other Wes Moore is one that the author couldn’t get out of his mind, not since he learned that another boy with his name just two years his senior grew up in the same Baltimore neighborhood. He wrote that boy now a man a letter, not expecting to receive a reply. But a reply came, and a friendship grew, as letters turned into visits and the two men got to know each other. Eventually, that friendship became the inspiration for “Discovering Wes Moore,” a moving and cautionary tale examining the factors that contribute to success and failure and the choices that make all the difference.

ABOUT THIS WAY HOME

One young man searches for a place to call home in this gut-wrenching, honest novel from New York Times bestselling author Wes Moore with Shawn Goodman. Elijah Thomas knows one thing better than anyone around him: basketball. At seventeen, he’s earned the reputation of a top-level player, one who steps onto the court ready for battle, whether it’s a neighborhood pickup game or a tournament championship. What Elijah loves most about the game is its predictability: if he and his two best friends play hard and follow the rules, their team will win. And this formula has held true all way up to the summer before their senior year of high school, when a sinister street gang, Blood Street Nation, wants them to wear the Nation’s colors in the next big tournament.

The boys gather their courage and take a stand against the gang, but at a terrible cost. Now Elijah must struggle to balance hope and fear, revenge and forgiveness, to save his neighborhood. For help, he turns to the most unlikely of friends: Banks, a gruff ex-military man, and his beautiful and ambitious daughter. Together, the three work on a plan to destroy Blood Street and rebuild the community they all call home.

This Way Home is a story about reclamation. It’s about taking a stand for what matters most, and the discovery that, in the end, hope, love, and courage are our most powerful weapons. 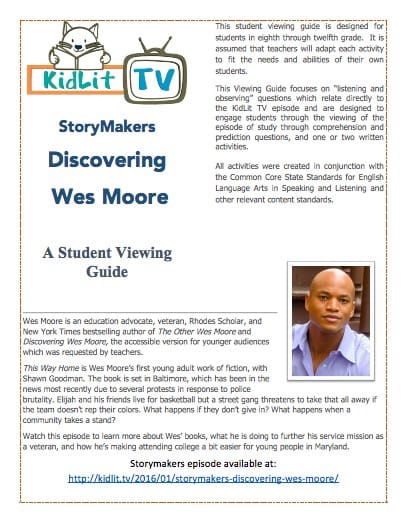 Via theotherwesmoore.com Wes Moore is a youth advo­cate, Army com­bat vet­eran, social entre­pre­neur, and host of Beyond Belief on the Oprah Win­frey Net­work. His first book The Other Wes Moore became an instant New York Times and Wall Street Jour­nal bestseller.

Born in 1978, Wes and his sis­ters were raised by their wid­owed mother. Despite early aca­d­e­mic and behav­ioral strug­gles, he grad­u­ated Phi Theta Kappa in 1998 as a com­mis­sioned offi­cer from Val­ley Forge Mil­i­tary Col­lege, and Phi Beta Kappa from Johns Hop­kins Uni­ver­sity in 2001, where he also played foot­ball and earned a bachelor’s degree in Inter­na­tional Rela­tions. He then became a Rhodes Scholar, study­ing Inter­national Rela­tions at Oxford University.

After his stud­ies, Wes, a para­trooper and Cap­tain in the United States Army, served a com­bat tour of duty in Afghanistan with the 1st Brigade of the 82nd Air­borne Divi­sion. Wes then served as a White House fel­low to Sec­re­tary of State Con­deleezza Rice. He serves on the board of the Iraq Afghanistan Vet­er­ans of Amer­ica (IAVA), The Johns Hop­kins Uni­ver­sity, and founded an orga­ni­za­tion called STAND! that works with Bal­ti­more youth involved in the crim­i­nal jus­tice system.

Wes is com­mit­ted to help­ing the par­ents, teach­ers, men­tors, and advo­cates who serve our nations youth. A por­tion of all book pro­ceeds for “The Other Wes Moore” are being donated to City Year and the US Dream Academy. 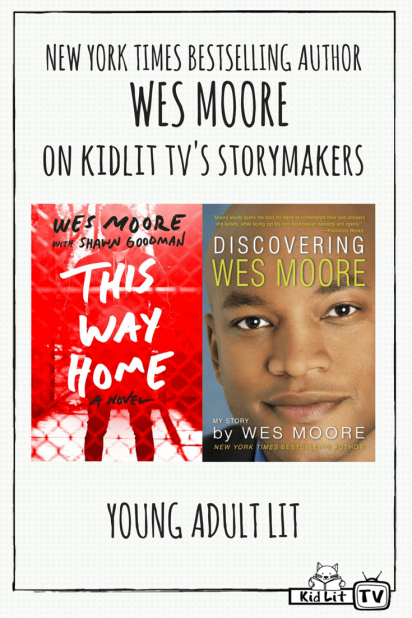 Five Questions (Plus One!) with Petr Horacek