KidLit TV had a “happily ever after” at Symphony Space’s Thalia Book Club Camp, where we met and interviewed Soman Chainani, author of The School for Good and Evil. The Thalia Book Club Camp is a four-week creative program for young readers and writers aged 9–13. Enthusiastic campers are able to interact with their favorite children’s book authors and illustrators, take part in literary discussions, and go on book-related field trips around New York City.

Watch Soman’s interview to gain lots of great insights, including:

Soman Chainani and The School for Good and Evil
The campers could barely stay in their seats as Soman entered the room; they were extremely excited to see one of their favorite authors. One camper had a stack of Soman’s books at the ready. Soman started the discussion by telling the kids about his book. He explained how classic fairy tales and Disney movies — many with whom the children are familiar — inspired The School for Good and Evil.

“I often rooted for the villains in the story growing up, because I thought they were the more interesting characters.” — Soman Chainani

Soman’s team put together brilliant trailers for each book. Below is the trailer for the first book. The trailers for the second book and the third book are also some of the best we’ve ever seen.

The School for Good and Evil is a New York Times bestseller. It takes you on an epic journey to a stunning new world, where happily ever after is told from a different perspective. Sophie, a glass slipper wearing, supposed good-doer believes she’s a shoe-in (no pun intended) for a spot at the School for Good. She hopes to join the ranks of Cinderella, Rapunzel, and Snow White. On the other hand Agatha who sports a grimace, dark locks, and pale white skin — she has a black cat, to boot — seems to be the stereotypical “perfect fit” for the School for Evil. 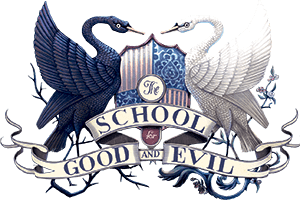 As fate would have it the girls’ fortunes are reversed. Sophie is dumped in the School for Evil. The girl who believed she was destined to attend the School for Good is forced to take courses including Uglification, Death Curses, and Henchmen Training. Agatha is brought to the School for Good, where handsome princes and fair maidens are spotted in every direction … flaunting their perfection. You have to read The School for Good and Evil, to find out what happens to Agatha and Sophie.

Soman Chainani’s Presentation
Soman asked the campers about their favorite books and said, “Favorite means you have to had read it more than twice!” With answers ranging from Harry Potter to Percy Jackson, the KidLit TV team was awed by how passionate these young readers were about books.

Soman told us about the many times he watched Disney movies with his brothers, when he was young, and how he became obsessed with fairy tales. When he attended college he’d long since left fairy tales behind, but he ended up stuck in a course which exposed the dark origins of modern fairy tales. He realized the classic tales told by authors such as Hans Christian Andersen and the Brothers Grimm were much more wicked than the Disney films they inspired.

“Disney princesses and princes get rewarded for making bad decisions and have a happy ever after. Good is clearly good and bad is devilishly bad. There is no grey scale.” — Soman Chainani

The School for Good and Evil explores the grayness of good and evil. Soman hopes to teach readers, young and old, that they cannot be fooled by appearances and “goodness” or “evil”.