Carol Weston is the author of more than 15 books and serves as “Dear Carol,” the advice columnist for Girls’ Life magazine. Her book Ava and Pip was said to be “a love letter to language,” by the New York Times Book Review. Carol joined StoryMakers host Rocco Staino to discuss the books in the Ava Wren series, her book of advice for teens, and her upcoming book titles.

We’re giving away three (3) bundles of books signed by Carol Weston. Each bundle includes a copy of Ava XOX, Ava and Taco Cat, and Ava and Pip. Enter now!

ABOUT THE AVA WREN SERIES

Love is in the air-and Ava thinks she’s allergic Valentine’s Day is just around the corner, and Ava couldn’t care less. That is, until a new girl, Kelli, asks out Ava’s friend Chuck…and he says yes What? ? Ava is NOT okay with this. But since when does she think about boys? For the first time ever, words fail Ava. She isn’t sure what she’s feeling (Like? Love? Friendship? Frustration?), or what “going out” even means. After all, fifth graders aren’t allowed to go anywhere by themselves, are they? To top it off, Pip’s friend Tanya is being bullied for her size. Ava wants to help-but, uh oh, it’s not as easy as she imagines. Don’t miss how it all began in: Ava and Pip and Ava and Taco Cat.

Ava desperately wants a pet for her eleventh birthday-but gets way more than she bargained for when she adopts T-A-C-O-C-A-T. When Ava Wren hears about an injured yellow tabby with mismatched ears, she becomes obsessed and wants to rescue him. She even picks out a perfect palindromic name: T-A-C-O-C-A-T. But when Taco joins the family, he doesn’t snuggle or purr-all he does is hide. Worse, Ava’s best friend starts hanging out with Zara, a new girl in fifth grade. Ava feels alone and writes an acclaimed story, “The Cat Who Wouldn’t Purr.” What begins as exciting news turns into a disaster. How can Ava make things right? And what about sweet, scared little Taco?

Meet outgoing Ava Wren, a fun fifth grader who tries not to lose patience with her shy big sister. When Pip’s 13th birthday party turns into a disaster, Ava gets a story idea for a library contest. But uh-oh, Ava should never have written “Sting of the Queen Bee.” Can Ava and her new friend help Pip come out of her shell? And can Ava get out of the mess she has made?

“The Speed of Life is the kind of book that you want to read speedily, all at once, because the characters are so engaging, the voice of the narrator pitch perfect, the situations convincingly real and raw, the humor and liveliness of the prose such fun to follow, and the feelings of that time in a teenager’s life when everything can go from awful to awesome in a heartbeat are so vividly captured. You won’t want to put it down. But my advice is slow down and savor this delightful book, full of cariño, funny and heartfelt, and (spoiler alert) not just for teens.”

— Julia Alvarez, author of How the García Girls Lost Their Accents

Carol Weston was born in Armonk, New York, but lives in Manhattan. She’s a Phi Beta Kappa comparative literature graduate of Yale, with an M.A. in Spanish from Middlebury College. She’s been on the Today show and Oprah, and The View. She loves cats, walks, art museums, and her husband, playwright Rob Ackerman, makes a mean paella. Carol has two daughters; one works for NBC and one co-started Birch Benders Micro-Pancakery. 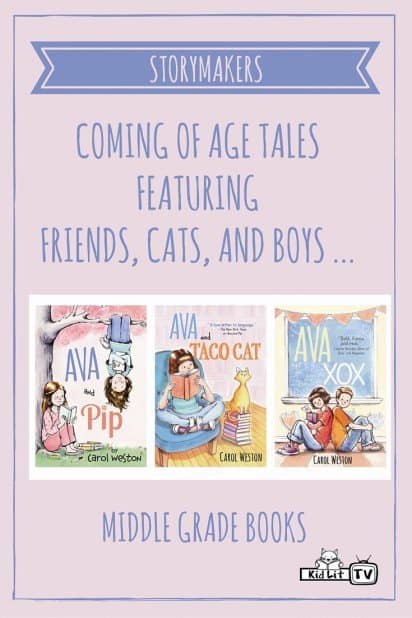 Loved hearing about these stories that I will soon be picking up for my now 3rd grader (10 year old) to read. It is so nice to hear how Carol Weston got her ideas and where great stories truly stem from, inside. I even came up with a new idea after hearing this! Yay! Thank you!

Heather, I’m so happy what Carol said during her interview resonated with you. The books are great and your 10 year-old will love them. It’s exciting to know you got an idea from the interview too! You are welcome.

My daughters would absolutely love the Ava Wren book series. I have added the books to our wishlist. Thanks for the giveaway.

Shauna, we think they’ll love the series too. There are many topics with which they’ll be able to identify. You’re welcome; best of luck and thank you for entering.