David Walliams is the bestselling author of Demon Dentist and several other middle grade books. Also, Walliams is a comedian who is best known to adults as the star of the popular English comedy, Little Britain. StoryMakers host Rocco Staino interviewed Walliams on location at New York City’s Path1 Studio. 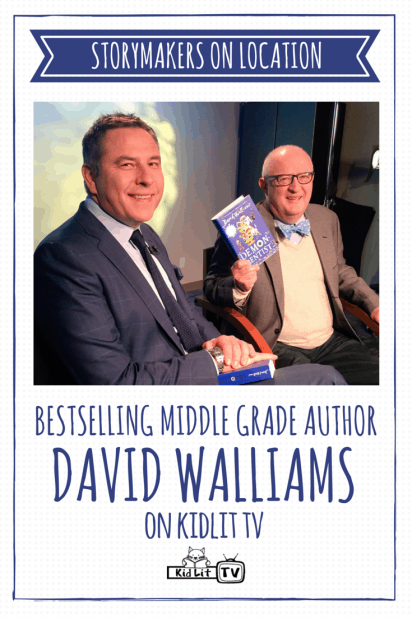 Something strange is happening in Alfie’s town. Instead of shiny coins from the tooth fairy, kids are waking up to dead slugs, live spiders, and other icky, terrible things under their pillows. Who would do something so horrific? Alfie is sure that Miss Root, the new dentist in town, is behind it all. There’s nothing Alfie hates more than going to the dentist, but to solve this mystery, he may have to book a dreaded appointment … (Via Harper Collins)

Via Harper Collins UK
Since beginning his publishing career in 2008, David Walliams has taken the children’s literary world by storm. His sixth book Demon Dentist was published in September 2013 and went straight to number one in the bestseller charts.

David is currently the fastest growing children’s author in the UK. Following the Christmas 2012 success and BAFTA nomination of the BBC adaptation of his second book, Mr Stink, starring Hugh Bonneville, Gangsta Granny was aired in 2013 over Christmas. Walliams’ books have achieved unprecedented critical acclaim and it comes as no surprise that countless broadsheet reviewers have compared him to his all-time hero, Roald Dahl.

David is well known for his work with Matt Lucas. Together they created Little Britain, which has won numerous international awards including three BAFTAs and is now shown in over 100 countries. David and Matt followed Little Britain with the hugely popular spoof airport documentary series Come Fly With Me.

In September 2011 David swam 140 miles from Gloucestershire to Westminster raising £2.5 million for Sports Relief. David has also proved popular in his role as a judge on TV talent show Britain’s Got Talent, where he found inspiration for one of the characters in his bestselling novel Ratburger.

What a fun interview! I love how David communicates back with his young fans. And he’s so right…they’re completely honest. How awesome it is for him to get kids that love, love his slightly-scary and hugely funny book :)