StoryMakers On Location | The Art and Whimsy of Mo Willems


StoryMakers host Rocco Staino caught up with Mo Willems at the preview for The Art and Whimsy of Mo Willems, a retrospective of Willems’ work at the New-York Historical Society. The Art and Whimsy of Mo Willems exhibit contains many pieces that show Willems’ process as he created some of kid lit’s most memorable characters. He hopes children create their own art after they leave the museum. The author and illustrator briefly discussed The Thank You Book, the 25th and last book in the Elephant and Piggie series.

Mo Willems has had a huge impact on the lives of children. As a television writer for Sesame Street he garnered six Emmys. His witty one-liners inspired children to quote characters from Codename: Kids Next Door amongst other familiar cartoons. In 2003 his first picture book, Don’t Let the Pigeon Drive the Bus!, was published and since then it’s been a stream of accolades; three Caldecott Honors, two Geisel Medals, five Geisel Honors, and a place in the Picture Book Hall of Fame.

Willems’ surly pigeon, the mismatched pair of Elephant and Piggie, and everyone’s favorite Knuffle Bunny are a few of the characters visitors will get to see evolve via the exhibit.

The Art and Whimsy of Mo Willems exhibition brings together original art, sketches, and inspirational drawings from Willem’s most popular series, plus stand-alone classics such as Leonardo the Terrible Monster and That is NOT a Good Idea!. It displays the efforts behind the effortlessness, the seriousness behind the silliness, and the desire, as Willems says, “to think of my audience, not for my audience.” His ability to crisply weave together life lessons and humor creates artful volumes that speak to all, regardless of size.

The Art and Whimsy of Mo Willems is open now, until September 25, 2016. Click here for ticket information, directions, and more.

The Eric Carle Museum of Picture Book Art organized the exhibition, which is supported by Disney Publishing Worldwide.

YOTTOY Productions and KidLit TV are hosting a MEGA MO WILLEMS GIVEAWAY! One (1) lucky viewer will win a copy of Don’t Let the Pigeon Drive the Bus, Let’s Go for a Ride, a talking Pigeon plush, and Elephant and Piggie finger puppets. The giveaway begins at 12:00 PM on Saturday, 4/23/16 and ends at 11:59 PM on Saturday, 5/7/16. Enter now! 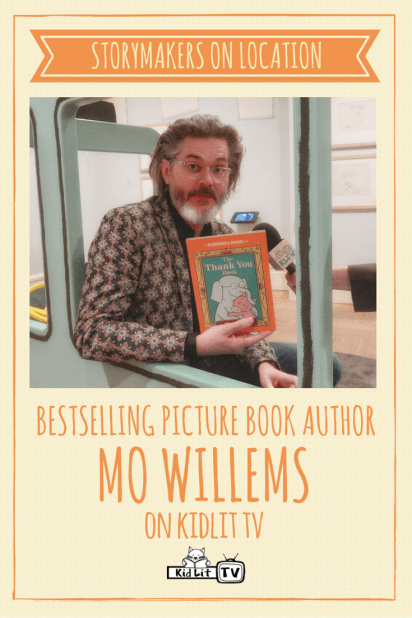 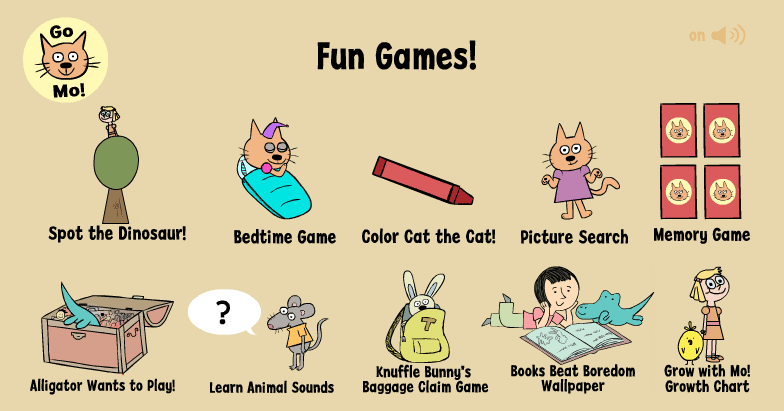 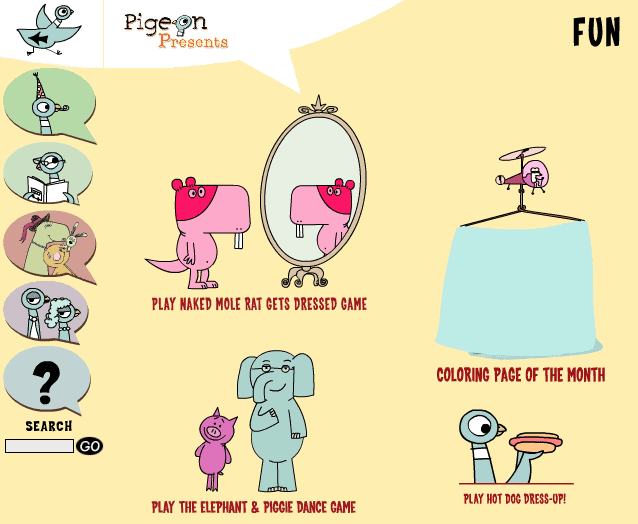 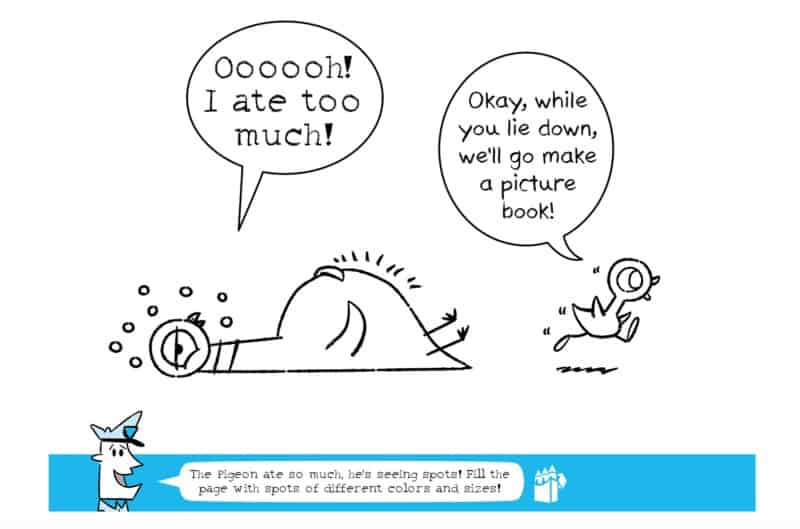 Coloring Sheet of the Month

ABOUT THE THANK YOU BOOK

The Thank You Book

Gerald is careful. Piggie is not. Piggie cannot help smiling. Gerald can. Gerald worries so that Piggie does not have to. Gerald and Piggie are best friends. In The Thank You Book!, Piggie wants to thank EVERYONE. But Gerald is worried Piggie will forget someone … someone important.

#1 New York Times Bestseller Mo Willems began his career as a writer and animator for PBS’ Sesame Street, where he garnered 6 Emmy Awards for his writing. During his nine seasons at Sesame Street, Mo also served as a weekly commentator for BBC Radio and created two animated series, Nickelodeon’s The Off-Beats and Cartoon Network’s Sheep in the Big City.

In addition to picture books, Mo created the Elephant and Piggie books, a series of “Easy Readers”, which were awarded the Theodor Suess Geisel Medal in 2008 and 2009 and  Geisel Honors in 2011, 2012, 2013, 2014, and 2015. For older audiences he has published an illustrated memoir of his year-long trip around the world in 1990-91 entitled You Can Never Find a Rickshaw When it Monsoons and Don’t Pigeonhole Me!, a collection of 20 years of his annual sketchbooks. His books have been translated into over 20 languages.

ABOUT THE NEW-YORK HISTORICAL SOCIETY

New-York Historical is recognized for engaging the public with deeply researched and far-ranging exhibitions. Supporting these exhibitions and related education programs are one of the world’s greatest collections of historical artifacts, works of American art, and other materials documenting the history of the United States and New York.

The New-York Historical Society’s museum is the oldest in New York City and predates the founding of the Metropolitan Museum of Art by nearly seventy years.

My students love the pigeon, Gerald, and Piggie so much! I cannot keep them on the shelves!

Mo’s books are the best. They really encourage kids to love reading because the characters are so funny and relatable.

Love Gerald with all his anxieties. He’s also such a great friend.

Aw, Gerald. That’s one of my favorite things about him; he’s terribly anxious but he doesn’t let that stop him from being a good friend.

I love the Pigeon…so persistent:)

For me, it’s a tie between Gerald and Piggie, but my kids say Pigeon is their favorite, hands down. I’m excited to read The Thank You Book.

You can’t really go wrong with any of them, really. As much as I’m excited about THE THANK YOU BOOK, I’m sad too. :/

My kindergarten students love Gerald and Piggie and were super excited to see the play “We are in a Play!” We also adore Trixie and Knuffle Bunny and there have been disagreements at home with how to properly pronounce K-nuffle bunny (a true topic in a parent conference this year!).

You can have as many favorites as you want. I’m excited to see Trixie in the mix.

I love Piggy…his energy and optimism always make me smile!

I just watched his trailer for The Thank You Book. Love Mo Willems!

I have a “slight” obsession with ice cream, so I love-love-love the scene where Elephant can’t decide whether to share the ice cream with Piggie. I had the spread with the spilled/melted ice cream (“Oh, nooooooooooooooooooooooooooo!”) on my wall in my office for a long time. So I guess I would say my favorite character is the slightly selfish, but ultimately generous Elephant. :-)

Flea in the Story of Diva and Flea was such a great friend despite their differences. liked that.

My fav Mo characters are Gerald and Piggie. They’re friendship has it’s ups and downs and they are still really good friends.

Such a fun series! I remember one of my former students brought a Piggie and Elephant book in their 2nd day of school “share bag”. Most students brought toys and trinkets. This little boy proudly shared his book and said “I just love to read so much!”

Leonardo has always been my favorite Mo Willems character. I love reading his story aloud.

I can’t help but pick the Pigeon. He is just so determined, but has such an obvious sense of humor

Pigeon is my favorite!!! Makes me laugh and act, and lets face it I am a teacher therefore I am an actress at heart!

Pigeon. I mean look at home. He just oozes personality!

Piggie & Elephant changed my life! I’m having a blast with Thankorama. Can’t wait to see what the next adventure brings.

I can identify with the Pigeon. So full of adventure

I LOVE Piggie and Elephant. I am so sad that The Thank You Book will be the last in the series.

📺✨STAY TUNED! Have you ever wondered how to draw like a cartoonist? Well, you’re in luck! Join The New Yorker cartoonist Liza Donnelly for #ReadySetDraw as she shares her top tips for learning to capture the world around you through your drawings!✍️✨WATCH from 7AM ET TOMORROW! ... See MoreSee Less