Stephen Savage is the author and illustrator of kid lit titles including several board books. Stephen relies on simple shapes and colors for his beautiful award-winning books! Stephen revisits the unassuming Walrus who has a new accomplice in Where’s Walrus? And Penguin? He walks us through the origin of the character and story while recalling New York City landmarks and pop culture references. In this episode of StoryMakers, you’ll also meet Supertruck, an unsung hero with a secret.

Stephen Savage is a 2015 Sendak Fellow. The Sendak Fellowship is a four-week residency for children’s book illustrators, created by Maurice Sendak. Which kid lit creator would Stephen like to have met? Watch the interview to find out!

We’re giving away three (3) sets of books signed by Stephen Savage. Each set includes a copy of Where’s Walrus? And Penguin? and Supertruck.

ABOUT WHERE’S WALRUS? AND PENGUIN?

Written and illustrated by Stephen Savage
Published by Scholastic

In this sequel to the acclaimed Where’s Walrus?, author Stephen Savage doubles the fun when Walrus escapes the zoo with his mischievous pal, Penguin. Will the zookeeper find them? Or will these clever runaways stay one step ahead disguised as subway riders, baseball players, and even grand opera performers? Hiding in plain sight, they elude the clueless zookeeper until a fly ball at a baseball game leads Walrus and Penguin to a chance encounter with surprising results.

A 2016 Geisel Honor book! When the city is hit by a colossal snowstorm, only one superhero can save the day. But who is this mysterious hero, and why does he disappear once his job is done? Find out in this snowy tale about a little truck with a very big job, the second of Stephen Savage’s vehicle-based picture books.

Via stephensavage.net
Stephen Savage is the author and illustrator of 9 books for children, including the New York Times bestselling picture book Polar Bear Night, written by Lauren Thompson. He is the creator of the here’s Walrus? books, Supertruck, and Little Tug. Steve is the recipient of a New York Times Best Illustrated Book award, a Sendak Fellowship, an ILA Primary Fiction Award, and a gold medal from the Society of Illustrators. His editorial illustrations have appeared in dozens of major newspapers and magazines including the New York Times, The Atlantic Monthly, The Washington Post, and The Wall Street Journal. He teaches at the School of Visual Arts in Manhattan and lives in Brooklyn with his wife and their daughter. 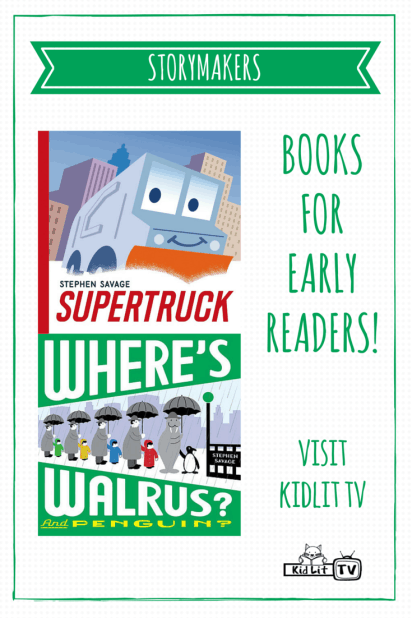 Interview With Melissa Hart | Author of Avenging the Owl