Congratulations are in order for David Solomons, who was awarded Children’s Book of the Year at the British Book Industry Awards last night for his debut novel, My Brother is a Superhero, beating JK Rowling, David Walliams and Terry Pratchett to the prize!

His winning book follows the story of a young comic book buff who during a trip to the loo, inadvertently passes up the chance to receive superpowers from a powerful alien. When his older, geeky brother receives them – along with a mission to save the universe – in his stead, he finds that it takes more than superhuman abilities to be a hero.
David Solomons wins Waterstones prize with superhero story
Read more
Speaking of his unexpected win, Solomons said: “It’s absolutely incredible, I hadn’t prepared anything to say in all humility. I thought there was no way I could’ve won out of that pack.”

“When I first wrote the book, I chucked it in at 30,000 words in the first draft and put it aside thinking: ‘this is the usual guff’, but my wife and her literary agent read it and said: ‘no, no. You must keep going’, so they must’ve seen something”.

The prize is David Solomons’ second big win of the year, he took home the Waterstones Children’s Book Prize 2016 in March).

In addition to winning accolades, My Brother is a Superhero has routinely received praise for the book’s comedy, an aspect of the book that makes it an interesting read for older as well as younger people. 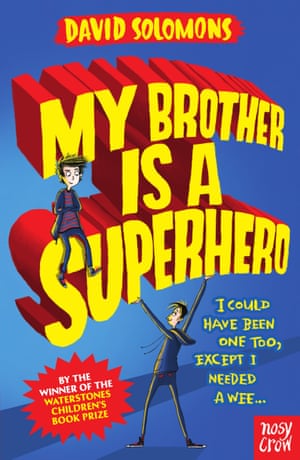 Read more at The Guardian.

Kids Top Picks : Books you Should be Reading!