We’re trying to make math cool … It’s for everybody
and it’s everywhere. It’s a part of your life.
— Billy Aronson

Jennifer Oxley and Billy Aronson are the team behind the award-winning PBS series “Peg + Cat,” produced by The Fred Rogers Company. Peg is a little girl whose life is a big math problem, which she solves with her best friend, Cat. Her world looks like math as the backdrop is graph paper and various items are made from simple shapes. The animated television series Peg + Cat has won seven Daytime Emmy Awards including Outstanding Pre-School Children’s Animated Program, Outstanding Individual Achievement in Animation (Jennifer Oxley), and Outstanding Writing in a Pre-School Animated Program.

Parents and teachers who want to continue the STEAM fun offline can turn to the Peg + Cat books written by the series creators. In this episode of StoryMakers Rocco Staino, Billy Aronson, and Jennifer Oxley discuss the creative vision for the series and several themes central to the  series of books. Fun, simple mathematics, diversity, and a seamless flow are essential to the success of the books and television series.

Oxley and Aronson offer encouraging messages about mathematics that will inspire children, parents, and teachers alike.

We’re giving away three (3) sets of books for this episode of StoryMakers. Each set includes a of copy of Jennifer and Billy’s picture book, PEG + CAT: THE PIZZA PROBLEM and PEG + CAT: THE RACE CAR PROBLEM. The giveaway ends at 11:59 PM on June 7, 2016. ENTER NOW! 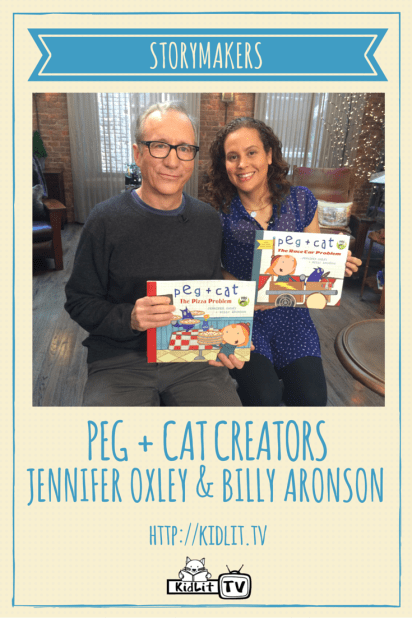 Peg and Cat, stars of their own Emmy Award winning animated TV series, zoom into a picture book and put math skills to the test in a lively racing adventure. Peg and Cat have built an amazing car out of things they found lying around. They’ve named her Hot Buttered Lightning (since she’s built for speed), and they plan to win the Tallapegga Twenty. If they can make it out of the junkyard, that is. It’s a good thing Peg knows the best shape to use to make wheels and how to count laps to see who is ahead. And it’s lucky that Cat reminds Peg to keep calm when she’s “totally freaking out.” Will Peg and Cat be the first to complete twenty laps and win the Golden Cup? Or will it be one of their quirky competitors? Count on Peg and Cat to rev up young problem-solvers for an exciting race to the finish.

Our daughter is only two but she’s really drawn to counting and numbers so we always encourage her to count and talk about numbers and adding/subtracting. She loves Peg + Cat and the show has helped us talk about math and shapes in a way that is approachable for her.

We teach the little ones math by counting as we play, as we build towers, etc.

What a fun video, especially the part where Jennifer and Billy are singing together! We try to listen to and sing a lot of music to teach math to our little one. Some of our favorite songs involve counting, and developing musical awareness helps with pattern recognition.

when we are out walking we count flowers and we also count how many birds we see. We count ll sorts of different things.