Yoga isn’t only for adults. More American parents are introducing their children to the ancient practice which originated in India. Preliminary studies show it is beneficial for reducing stress and improving mood. Certified yoga instructor and author Susan Verde wrote I Am Yoga, a picture book which helps children explore mindfulness through relationships and movement. The book is one of several kid lit collaborations between Verde and the New York Times bestselling author and illustrator Peter H. Reynolds. His relaxed illustration style helps convey Susan Verde’s message of peace, stillness of mind, and tranquility.

Reflecting the swelling ranks of adult yogis, a growing number of kids are now doing yoga, as health experts, researchers and educators note the promise of initial research suggesting the ancient meditative movement practice may help little ones relieve stress, calm anxiety and improve mood – along with helping address ADHD, without drugs.

Susan Verde and StoryMakers host Rocco Staino were joined by — via satellite —  kid lit singer and songwriter Emily Arrow. Arrow has written and performed songs based on children’s books. Together, Verde and Arrow collaborated on a song and music video for I Am Yoga. Emily Arrow’s song lyrics draw heavily from the book. Arrow’s latest CD, “Storytime Singalong, Volume 1”, is a combination of songs based on popular kid lit and tunes for young readers. 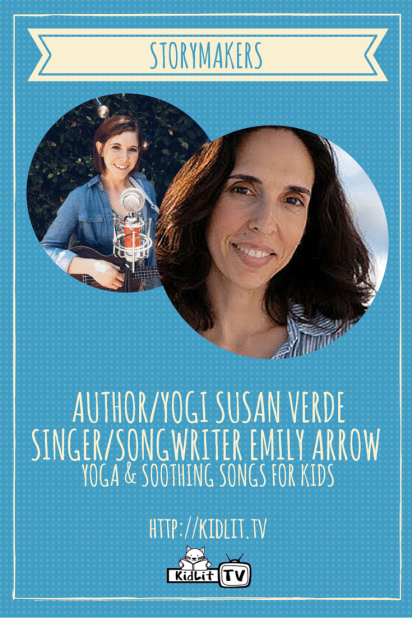 ABOUT ‘I AM YOGA’

An eagle soaring among the clouds or a star twinkling in the night sky … a camel in the desert or a boat sailing across the sea yoga has the power of transformation. Not only does it strengthen bodies and calm minds, but with a little imagination, it can show us that anything is possible. New York Times bestselling illustrator Peter H. Reynolds and author and certified yoga instructor Susan Verde team up again in this book about creativity and the power of self-expression. I Am Yoga encourages children to explore the world of yoga and make room in their hearts for the world beyond it. A kid-friendly guide to 16 yoga poses is included.

Susan Verdeis an award-winning children’s book author, elementary educator, and a certified children’s yoga instructor. Her books highlight the unique manner in which children see the world. Her stories focus on their interactions with their surroundings with emphasis on problem solving in a calming and mindful way. Susan’s books are used to teach children how to express gratitude and to support each other.

Susan became a certified kids yoga instructor and children’s book author, after several years in the education field. “Her stories inspire children to celebrate their own, unique stories and journey. Her writing also inspires adults to let their inner child out to dream of infinite possibilities… and maybe come out for a spontaneous game of hopscotch every now and then.”

Susan’s latest book, The Water Princess, will be published in late 2016. The book is another collaboration with he bestselling, award-winning, author and illustrator, Peter H. Reynolds. Peter and Susan have collaborated on The Museum, You & Me, and I Am Yoga. Susan lives in East Hampton, New York with her three children and dog.

Emily Arrow is the 2015 winner of the John Lennon Songwriting Contest in the Children’s Category for her song “The Curious Garden Song”. The song was inspired by the book THE CURIOUS GARDEN by Peter Brown. Emily was also a finalist in the 2015 Great American Song Contest and the 2014 John Lennon Songwriting Contest. Emily Arrow creates literature inspired music for children, cultivating an appreciation and love for singing, songwriting, literature, and art. She performs storytimes of her original music regularly in Los Angeles at Once Upon A Time Bookstore and Children’s Book World. Emily is touring in support of the album at schools, bookstores, and libraries around the country!

Originally from Ohio, Emily played the piano, read a lot of books, and led a neighborhood “kids only choir.” Fast forward to now and…she’s still silly, she still sings incessantly, and she still loves books! She is a graduate of Berklee College of Music in Boston and earned her graduate-level teaching certification in Orff-Shulwerk Levels I & II. After graduating Emily became a K-6 music teacher at a performing arts-based elementary school in Los Angeles. During her time teaching, she found that her passion was collaborating with the library, art, and technology departments. Which led her to her current career as a kidlit singer/songwriter!

Oh my gosh what a great ,creative and funny book interview.
The book is so wonderful for kids to read and to learn yoga.
The drawings are so cute.
And the song was a perfect “Fit” with the book.
Rocco was so funny-a great sport-and for a first timer doing yoga –‘Great Job’.
Rocco you should definitly be a comedian–so funny.
Super Interview.
patte

This is a great combo/book and song.

My favorite Yoga pose is tree . This looks like a wonderful combo and can’t wait to see both!

What a great, fun interview! I’m sure the book & Emily’s music will be a blast, too!

I love these two items! Emily’s music brings such joy and I Am Yoga should be in every classroom and library! So perfect!
My favorite yoga pose is child’s pose or cat/cow. I feel I really let go of the stress from the day when I do these two stretches.
Thanks for this opportunity!

Such a cute book and the song fits perfectly! Yoga can be very relaxing for adults and kids!

A fun combination of story and song. Some of my favorite yoga poses are cat, cow, and mountain.

Enjoyed listening to Emily Arrow sing this song and seeing the audience participate by doing the yoga moves!

How fun are Bow and Emily Arrow? What a treasure to the KidLit world! I think my favorite yoga pose may be cobra.

My favorite yoga poses are downward dog and the child’s pose. My daughter and I adore Emily Arrow and would be so excited to so her CD along with I Am Yoga!