Get your popcorn and tickets ready folks, because KidLit TV is premiering the book trailer for Grimelda: The Very Messy Witch written by Diana Murray and illustrated by Heather Ross.


Your kids will love Grimelda’s spunky personality and relate to her kind, but untidy manner. Her house may not be clean, but to her it’s cozy, and that’s just the way she likes it. The trouble is, she likes scrumptious pickle pie as much as she likes leaving her house a mess. And the main ingredient, well, it’s buried somewhere in her messy house!

“Grimelda is perfect for reading aloud with a child at Halloween as well as all year round, or for an emerging reader to enjoy on their own. The vibrant illustrations by Crafty Chloe illustrator Heather Ross provide plenty of fun things for readers to discover on repeated reads.” – Harper Collins 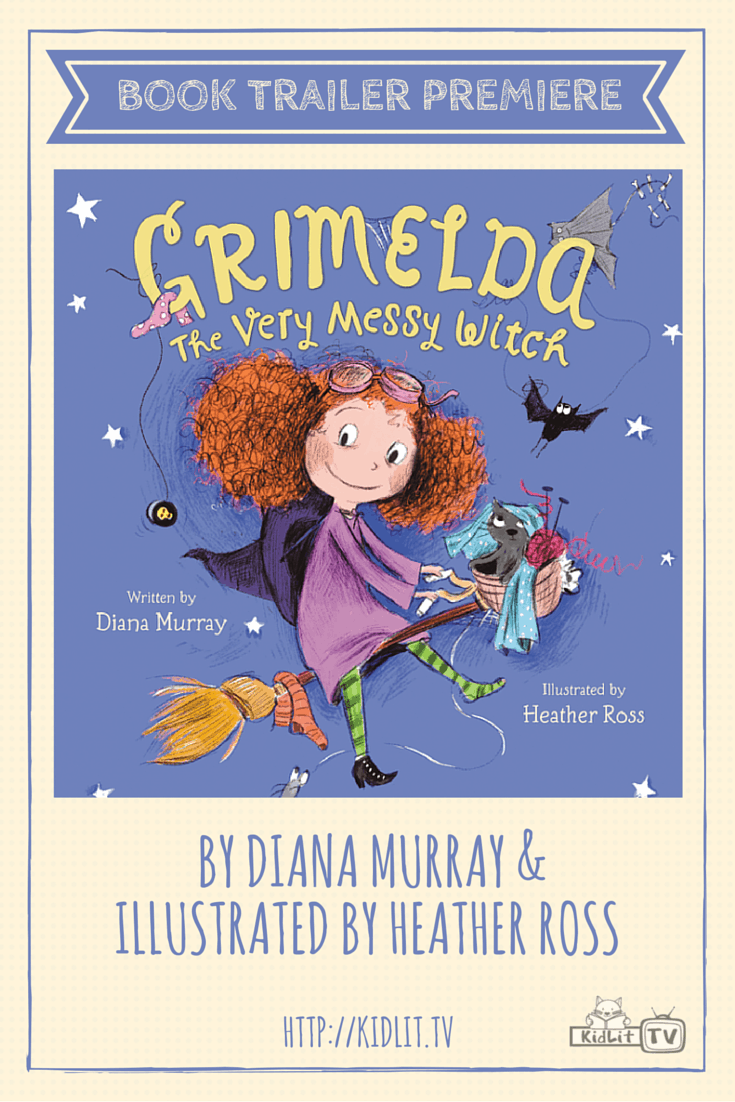 ABOUT GRIMELDA: THE VERY MESSY WITCH

Grimelda’s house may not be tidy, but it’s cozy, and that’s just the way she likes it. She also likes pickle pie. There’s only one problem she can t find the main ingredient in her messy house Readers who enjoyed Norman Bridwell’s classic The Witch Next Door will love this funny, charming story about the everyday life of a witch.

Diana Murray writes poetry and books for children. Her award-winning poems have appeared in magazines including Spider, Ladybug, Highlights, and High Five. Diana recently moved from the Bronx to a nearby suburb, where she lives with her husband, two very messy children, and a goldfish named Pickle. She is represented by Brianne Johnson at Writers House literary agency.

In 2010 she began to illustrate children’s picture books, and commenced to write in earnest, publishing a book of essays about her upbringing, titled How To Catch a Frog (Abrams). Today she continues to work both as an illustrator and author, with clients in publishing and manufacturing. She thoroughly enjoys small collaborations with companies and causes that she feels passionate about. Heather lives in New York City and the Catskill Mountains with her husband, daughter, and dog.

I got a chance to read an F&G at the NJ SCBWI conference and it is adorable!

Thanks, Corey, my rhyme buddy!

Thanks so much, Robin!

So proud of Diana and all her accomplishments! Such talent :)

Thanks, Lynne! Sorry I didn’t see you at the NJ conference this year!

And congrats to Katya as well — LOVE the trailer.

It looks adorable! Congrats all around!

Thanks for stopping by, Penny!

Well done, Katya. So much to love about the trailer that I can’t pick one favorite thing. Messed IS best! A true sign of a creative soul. :D

Thanks, Katya! So glad we got to work together AND finally meet in person! <3

Thanks so much, everyone!

I LOVE the book trailer. Can’t wait for the book to be out!

I love the entire book trailer! My favorite part has to be when Grimelda comes in flying with that broom!! Adorable :)

I love that is is rhymed!
I with I could fly on my broom too. so much more fun than sweeping. Sigh.

That music is a lot of fun, and I love that she uses her broom to fly, not sweep!

This is just adorable!

The Ever Never Handbook by Soman Chainani