StoryMakers host Rocco Staino isn’t only great at interviewing award-winning kid lit creators. He’s great at reading books aloud too! Don’t let the suit and bowtie fool you; Rocco can get pretty silly, especially when he’s reading Dr. Seuss’s What Pet Should I Get?

ABOUT WHAT PET SHOULD I GET?

What Pet Should I Get?

This previously never-before-seen picture book by Dr. Seuss about making up one’s mind is the literary equivalent of buried treasure. What happens when a brother and sister visit a pet store to pick a pet? Naturally, they can’t choose just one. The tale captures a classic childhood moment, choosing a pet and uses it to illuminate a life lesson: that it is hard to make up your mind, but sometimes you just have to do it. Told in Dr. Seuss’s signature rhyming style, this is a must-have for Seuss fans and book collectors, and a perfect choice for the holidays, birthdays, and happy occasions of all kinds. An Editor’s Note at the end discusses Dr. Seuss’s pets, his creative process, and the discovery of the manuscript and illustrations for What Pet Should I Get?

Via IndieBound.org
Dr. Seuss was born Theodor Geisel in Springfield, Massachusetts on March 2, 1904. After attending Dartmouth College and Oxford University, he began a career in advertising. His advertising cartoons, featuring Quick, Henry, the Flit!, appeared in several leading American magazines.

Dr. Seuss’s first children’s book, And To Think That I Saw It On Mulberry Street, hit the market in 1937, and the world of children’s literature was changed forever! In 1957, Seuss’s The Cat in the Hat became the prototype for one of Random House’s best- selling series, Beginner Books. This popular series combined engaging stories with outrageous illustrations and playful sounds to teach basic reading skills. Brilliant, playful, and always respectful of children, Dr. Seuss charmed his way into the consciousness of four generations of youngsters and parents. In the process, he helped kids learn to read.

Winner of the Pulitzer Prize in 1984 and three Academy Awards, Seuss was the author and illustrator of 44 children’s books, some of which have been made into audiocassettes, animated television specials, and videos for children of all ages. Even after his death in 1991, Dr. Seuss continues to be the best-selling author of children’s books in the world.

Rocco is the charismatic host of StoryMakers.  A captivating and important figure in the book community, he is a retired librarian, a contributing editor at School Library Journal, a contributing writer at The Huffington Post, and the Director of the Empire State Center for the Book, which administers the New York State Writers Hall of Fame. Rocco has interviewed such luminaries as Beverly Cleary, Judy Blume, and Jean Craighead George. 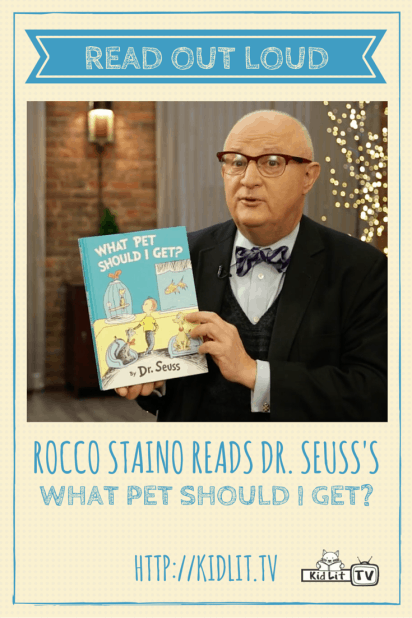 Thank you! It was a fun shoot and Rocco is great at reading to kids!

I’m a little kid and he got good reading.

I would get a Cat.

Cats are my favorite, too!

I hate cats one scratched me in the eye and lip before and you cant even play with cats and they just ignore you most cats do that!

Oh, I’m so sorry that kitty scratched you! Mine are so very sweet, and I know they would be much kinder!

I would get a cat.

I would get the kitten.

Cats are the best

Dogs are the best in the world i would have gotten the puppy and that story was amazing thank you Mr. Staino.

I would pik the cat