Patrick talks about three of his popular picture books! Thank You and Goodnight, A Perfectly Messed-Up Story, and Tek: The Modern Cave Boy. Thank You and Goodnight is a goodnight tale about a pajama party featuring storybook characters such as Winnie The Pooh! At the end of the fun and exciting night, all of the characters say thank you for the day, the night, and good friends! Next, comes A Perfectly Messed-Up Story! This picture book follows Little Louie’s who’s story keeps getting messed up! The book tells an important message, life is not perfect, but everyone should love what it is! Tek: The Modern Cave Boy is about Tek, a young caveboy who is glued to technology! You won’t see this young boy without his cell phone or video games! Can anyone in the village convince Tek to unplug and come outside into the big, beautiful world?

Patrick gives tips to young artists: “Practice makes perfect.” A piece of advice that can be taken a long way.

Join us on a quest to:

We’re giving away a Bundle of Three Books by Patrick McDonnell! You can win Tek: The Modern Cave Boy and SIGNED copies of A Perfectly Messed-Up Story & Thank You and Good Night! The giveaway ends at 11:59 PM on October 20, 2016. ENTER NOW!
a Rafflecopter giveaway 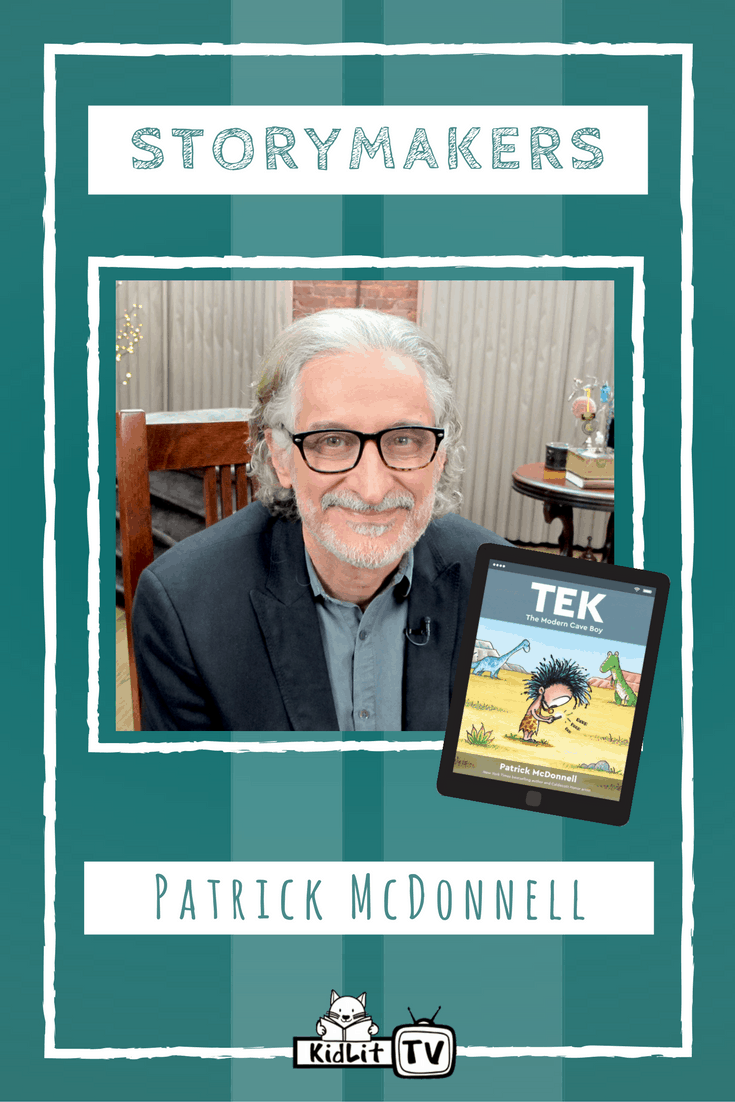 Little Louie’s story keeps getting messed up, and he’s not happy about it. What’s the point of telling his tale if he can’t tell it perfectly? But when he stops and takes a deep breath, he realizes that everything is actually just fine, and his story is a good one–imperfections and all.

THANK YOU AND GOOD NIGHT

During a fun pajama party, three animal friends dance and play, but at last, everyone is getting sleepy. Is it time for bed yet? Not before taking the time to say thank you for the day, the night, and good friends.

ABOUT PATRICK MCDONNELL
In 1994 Patrick McDonnell created the comic strip MUTTS, which now appears in over 700 newspapers in 20 countries. MUTTS has been described by Peanuts creator Charles Schulz as “One of the best comic strips of all time.” In 2005, McDonnell embarked on a children’s book career. His first children’s book The Gift of Nothing quickly became a New York Times Best Seller. McDonnell is involved with many animal and environmental charities and is a member of the board of directors for both the HSUS and the Fund for Animals. His characters have been enlisted by the U.S. Marines for their 2006 Toys for Tots holiday poster, the American Library Association’s 2007 “Read!” poster, and by the HSUS for their humane postage stamps.

I love “A Perfectly Messed-Up Story”, but I’ve never read the other two books!

Oops, I didn’t read the directions properly! I do love using technology but I hope we always have print books too :)

We have a love-hate relationship with technology. Love it (may be addicted to it) when all is working well, but loathe it and want to throw it out the window when it has its glitches.

I love technology that allows us to watch our fav authors!

Thank you, Amy! We’re so happy to share our love of all things kid lit with you and your young readers!

Technology is amazing and distress. Amazing that we can connect with authors, illustrators, publishers, and book enthusiast. Distressing when we expect technology to work smoothly and it does not!

Excited about these books!

You have got to see Tek “in person”! It really looks like an iPad!

of course I love technology. It has it’s good and bad parts, I guess. Where would we be without things like sliced bread? Everything in moderation, I guess.

I just recently got a smart phone and am delving into the social media aspect of being able to share pictures immediately–this I enjoy. Plus I can take photos of something and email it or message it and this saves me so much time. But sometimes, technology just complicates my life.

I do love technology but I think it’s all about balance!