Read Out Loud: THE TRUE STORY OF THE THREE LITTLE PIGS


We were absolutely delighted when Jon Scieszka invited us to film a video for the Children’s Choice Book Awards in his home. After filming in his study Jon was gracious enough to read one of his most popular books — The True Story of the Three Little Pigs — a retelling of the classic fairytale from the wolf’s point of view. Was the wolf really as bad as the pigs said he was? Could the three little pigs have been three little meanies? You decide. 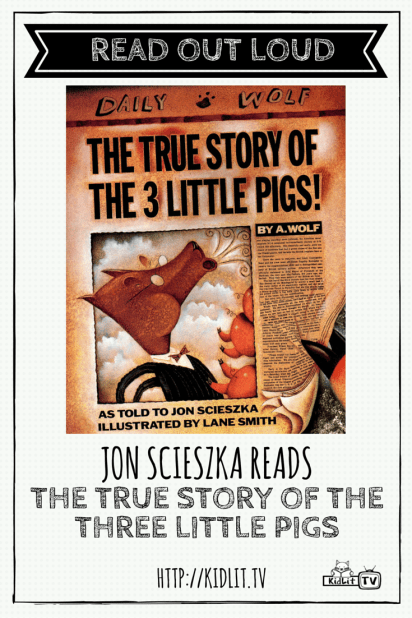 ABOUT THE TRUE STORY OF THE THREE LITTLE PIGS

The True Story of the Three Little Pigs

A. Wolf is still sticking to his story: he was framed As for that huffing and puffing stuff? A big lie. A. Wolf was just trying to borrow a cup of sugar to make his poor old granny a birthday cake. Who should you believe, the pigs or the wolf? You read. You decide. With over two million copies sold, The True Story of the Three Little Pigs remains as funny and irreverent as the inventive minds of Jon Scieszka and Lane Smith. Viking is celebrated it’s 25th anniversary in 2014 with a handsome gift edition, featuring a stunning new jacket with lots of silver. And there’s a surprise inside as well.

Jon Scieszka was born in Flint, Michigan, the second of six boys born to Shirley and Louis Scieszka. Jon attended Culver Military Academy for high school. After high school Jon studied science and English at Albion College in Michigan. Upon graduating he in 1976 he moved to Detroit, then to Brooklyn, NY to write. He earned his MFA in Fiction from Columbia University in New York in 1980.

While teaching Jon realized children were the best audience for the stories he dreamed up. After taking a year off from teaching to write he sent stories to publishers. However this didn’t dissuade him from writing more — and painting apartments.

Jon met Lane Smith, an artist who was painting illustrations for magazine articles, and working on his first children’s book. Jon shared his story, A. Wolf with Lane. Lane drew illustrations for the book, then they shopped it around. Unfortunately, the story was rejected by every publisher to which it was sent. After many more rejections Regina Hayes, an editor at Viking Books, took a chance on the story. In 1989 the book was published as The True Story of the 3 Little Pigs!. Since the then more than three million copies of the book have been sold.

It’s been more than 20 years since Jon and Lane started working together. As a team they have worked together on eight picture books and eight Time Warps. Lane’s wife Molly Leach has designed all of their picture books.

Jon’s books have won awards including the Caldecott, and sold over 11 million copies domestically and internationally.

Jon still lives in Brooklyn with his wife Jeri. They have two children: a daughter Casey, and son Jake.

Love the story never knew that is what happened.
Very enjoyable,and Jon has a great reading voice.
The illustrations matches the story perfectly.
Nice going
patte

Thanks, Patte! It was a thrill to shoot with John. He’s hilarious and was really into reading this story aloud as if he was in a room filled with young readers.

What a treat! Thank you!.

Such a cool book

Such a cool book

Wow this read aloud was so fun!

This is a lovely book It’s hilarious

This is a lovely book it’s really hilarious???

I liked the story funny

It was a good book.

That was a great story. You should make the real story of Little Red Ridinghood

The book was really good.

It was a good book

The story was AMAZING thank you for reading it out loud

that was AMAZING please make another thing like that

I am 26 and read this book in elementary school, wow! Love it

omgggggggggg this is a winer AWESOME

Read Out Loud THE GOODBYE BOOK