We here at KidLit TV are excited about Kwame Alexander’s latest book SOLO (Blink, 2017).  As with other of Alexander’s award winning books, SOLO is written in verse. Set in the world of music, its main character Blade Morrison grows up in the shadow of his famous rock star father. Haunted by the memory of his mother, Blade sets upon a journey of self-identity which takes him to a village in Ghana. 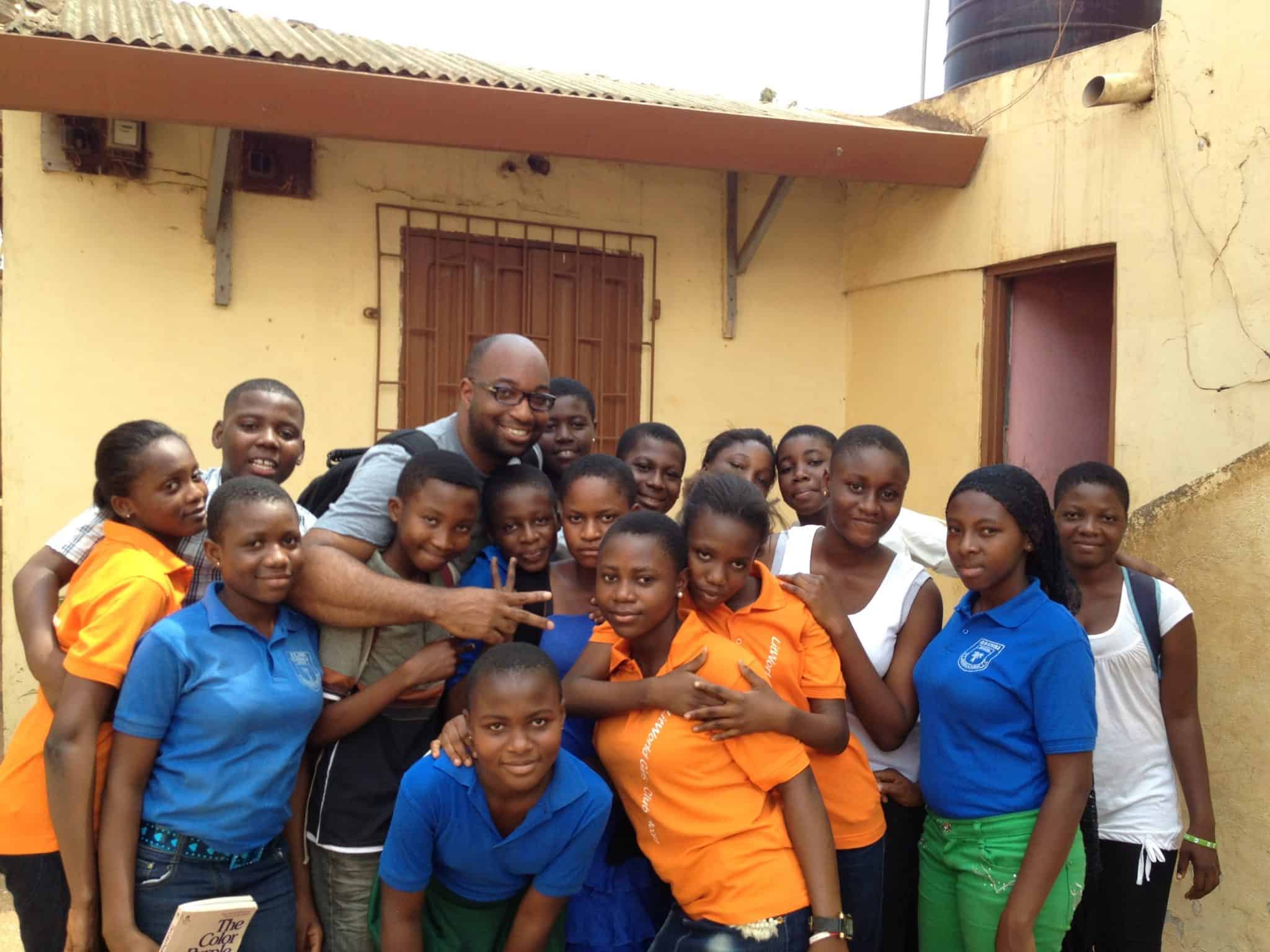 We think it’s awesome that to celebrate the publication of this book, Kwame Alexander and 25 educators are traveling to a village in Ghana where he and his foundation LEAP.org have built a library.

In the video above, we caught up with Kwame Alexander and Mary Rand Hess at Bank Street College of Education! 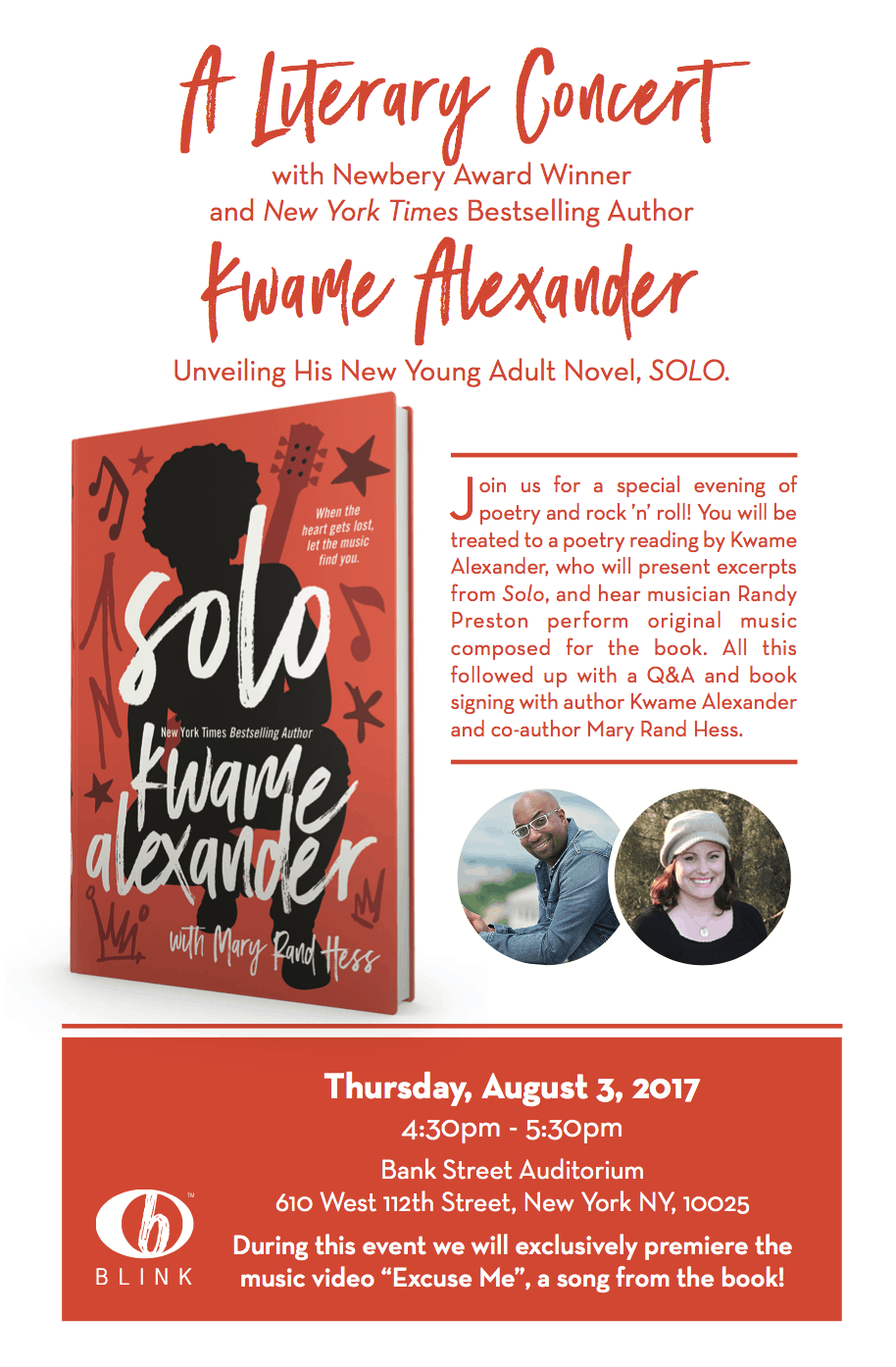 A special evening of poetry and rock ’n’ roll!  Poet, Kwame Alexander presented excerpts from his new young adult novel Solo.  Musician Randy Preston performed music composed for the book.  The music video for Excuse Me, an original song from Solo will be premiered. 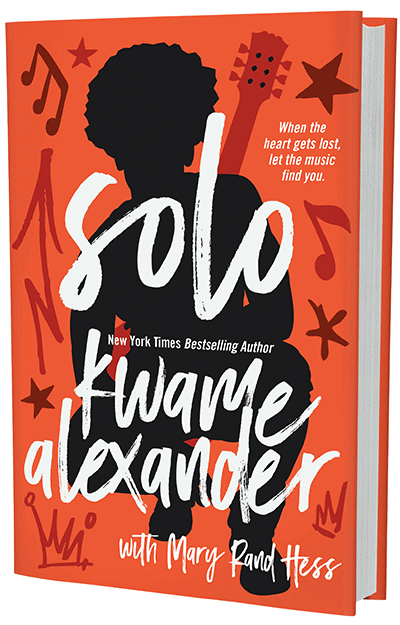 About SOLO
From award-winning and New York Times bestselling author Kwame Alexander, with Mary Rand Hess, comes Solo, a YA novel written in poetic verse. Solo tells the story of seventeen-year-old Blade Morrison, whose life is bombarded with scathing tabloids and a father struggling with just about every addiction under the sun—including a desperate desire to make a comeback. Haunted by memories of his mother and his family’s ruin, Blade’s only hope is in the forbidden love of his girlfriend. But when he discovers a deeply protected family secret, Blade sets out on a journey across the globe that will change everything he thought to be true. With his signature intricacy, intimacy, and poetic style, Kwame Alexander explores what it means to finally come home.

Thanks for the dynamic presentation.

It was a great event! Thank you for being there!

What a talented, generous, and original guy Kwame is. Thanks, KidLit TV, for your program! Very cool.

Thank you, Roxie! It was pleasure to work with Kwame and Mary!

I SEE A SONG | Animation