Read along with author Selene Castrovilla on this episode of Read Out Loud on Governors Island! Selene will be reading REVOLUTIONARY ROGUES.

We taped this episode of Read Out Loud on location during the KidLit TV Children’s Book Weekend on Governors Island at a house built in the late 1800s! The military installation on Governors Island was known collectively as Fort Columbus, and in 1878, officers’ families started to move in, and resources, such as a movie theater, a YMCA, “officer’s club,” public school, and three chapels, were built. This house is located next to the Admirals House in Nolan Park. 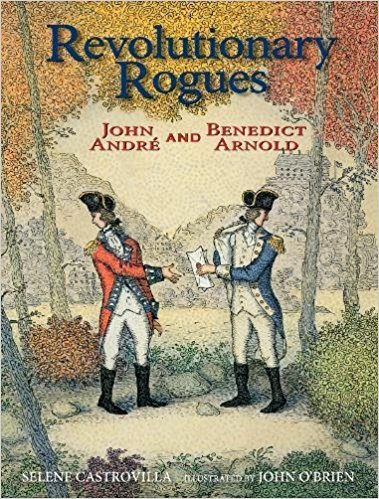 Young fans of the Broadway smash Hamilton will enjoy this riveting nonfiction picture book that unfolds like a play, telling a story from American history. Gravely injured and with little chance for more military honors, Major General Benedict Arnold seeks reward and recognition another way. He contacts Major John André, the new head of British intelligence and another man determined to prove himself. Arnold and André strike a deal and use Arnold’s intelligence to take over West Point, the strategic American fort. The plan ultimately fails, leading to André’s capture and death and Arnold’s loss of reward and glory. Author Selene Castrovilla and illustrator John O’Brien brilliantly capture the tensions and high drama of these two revolutionary rogues by highlighting their similarities and differences and demonstrating how they brought about their own tragic ends. This title also includes an afterword, timelines of the lives of both men, an extensive bibliography, and a list of key places to visit.

Selene Castrovilla is an award-winning teen and children’s author who believes that through all trends, humanity remains at the core of literature. Selene holds an MFA in creative writing from New School University and a BA in English from New York University. She lives on Long Island with her two sons.

Read Out Loud: DAD AND ME IN THE MORNING