Librarians will tell you that the library is more than a place to borrow the latest Gillian Flynn thriller – you can get internet access, try out new tech, even learn a new skill. But for the homeless population, libraries have also been a refuge from brutal weather and dangerous streets.

In his new film “The Public,” writer, director and actor Emilio Estevez explores what happens when a cold snap hits Cincinnati and a downtown library’s homeless patrons refuse to leave.

Estevez says inspiration for “The Public” came in April 2007, when he read an LA Times article written by a retiring Salt Lake City librarian named Chip Ward, who described a day in the life as a librarian dealing with the city’s homeless who frequented the library as a de facto homeless shelter. “What would happen if the patrons, many of whom are homeless and suffering from mental health issues, decided to occupy. What would that look like, how would law enforcement react, who would the media respond to this and how would they spin it? The movie is now oddly and sadly more relevant than it would’ve been had we made it 10 years ago.” 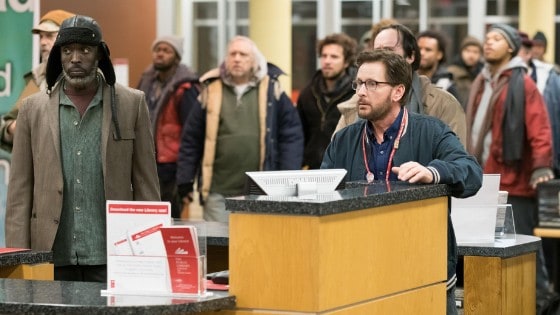 One of the movie’s other stars is Grammy-winning Chicago hip-hop artist Che “Rhymefest” Smith, whose father was homeless for over 30 years. “When I first met my father, we met at the public library,” Smith said. “Because this was the place where he had dignity. We could meet and it wasn’t the park where he was hanging out, it wasn’t the homeless shelter.

Read on for How Libraries Can Help the Homeless on PBS News.