Leonard Marcus is back with a new podcast episode of What Becomes a Classic? This time he’s heading to the Museum of the City of New York to meet with Morgen Stevens-Garmon, curator of A City for Corduroy: Don Freeman’s New York. The exhibition marks the 50th anniversary of CORDUROY! Morgen shows us some of Don Freeman’s amazing artwork and offers insight into the way his time in New York City forever shaped his work and storytelling.

Watch this episode of What Becomes a Classic? 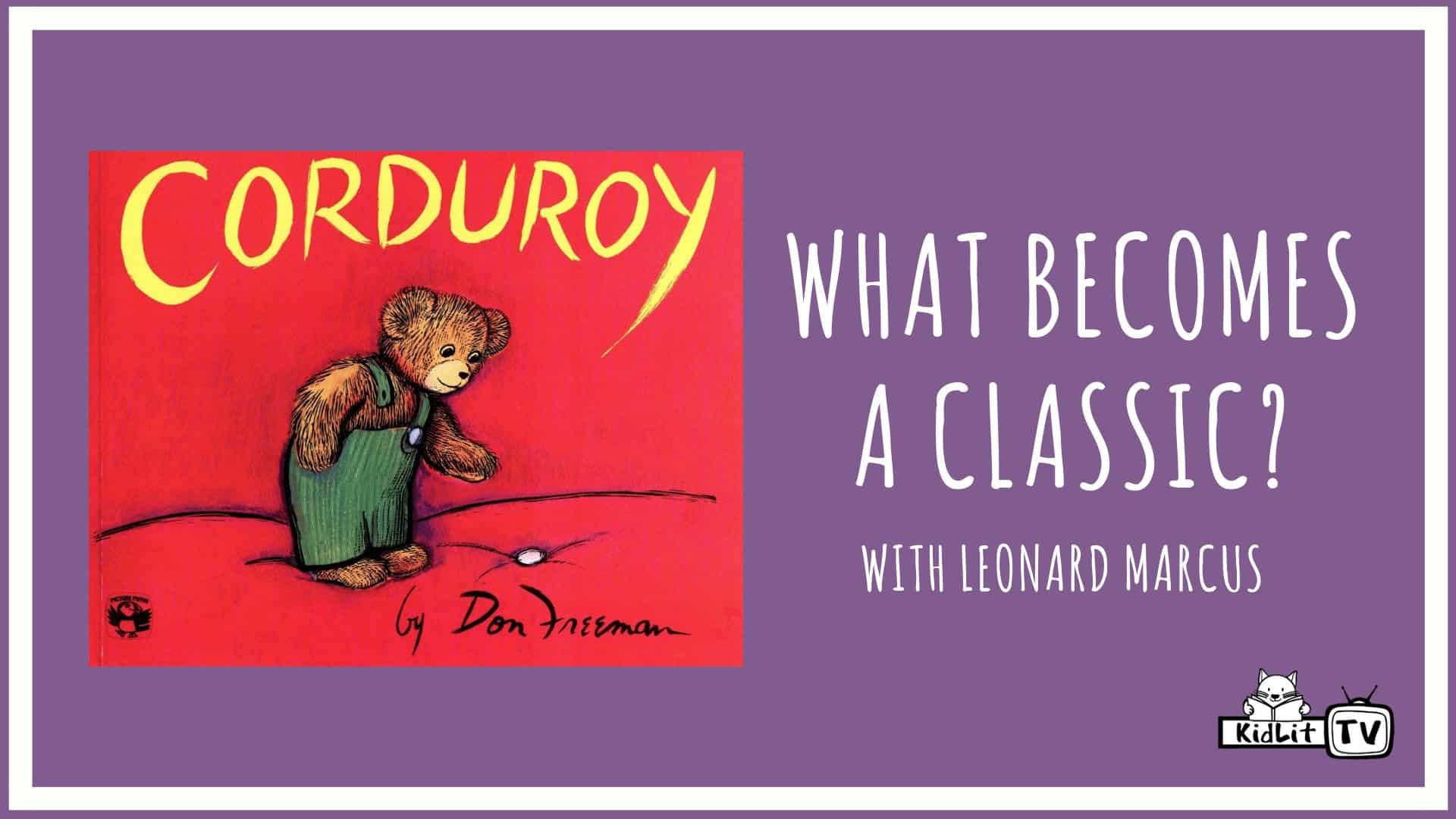 Don Freeman’s classic character, Corduroy, is even more popular today then he was when he first came on the scene in 1968. This story of a small teddy bear waiting on a department store shelf for a child’s friendship has appealed to young readers generation after generation.

Leonard’s pathfinding writings and exhibitions have earned him acclaim as one of the world’s preeminent authorities on children’s books and the people who create them. He is the author of more than 20 award-winning biographies, histories, interview collections, and inside looks at the making of children’s literature’s enduring classics. His reviews and commentary have been featured in the New York Times Book Review, Washington Post, The Horn Book, and on numerous radio and television programs including Good Morning America, All Things Considered, PBS NewsHour, BBC Radio 4, CBC As It Happens, Beijing Television, and Radio New Zealand, among others.

From The Museum of the City of NY:
A CITY FOR CORDUROY: DON FREEMAN’S NEW YORK
Best known today as the creator of the lovable teddy bear Corduroy, Don Freeman (1908–1978) spent over 20 years depicting New York City and its residents before becoming a children’s book author. He moved to New York from California in 1928—just shy of his 20th birthday—with little more than a few sketching supplies and a trumpet. Soon he was using his income from trumpet gigs to fund his studies at the famous Art Students League. Freeman sketched everything he saw, wherever he was. His eye was profoundly democratic, embracing the varied characters and street life of New York. He was also a lifelong lover of the stage, and his theater sketches launched his illustration career when his first drawing was published in the New York Herald Tribune’s drama section on October 14, 1928. After the Depression hit, Freeman found work as an artist for the Works Progress Administration’s Federal Art Project. He created his own magazine, Newsstand, to serve as a more personal outlet for his drawings and lithographs of the city. In 1951 Freeman published his first children’s book, co-authored with his wife and fellow artist, Lydia Cooley. Freeman would go on to author and illustrate nearly 40 books for children, including the groundbreaking Corduroy. A City for Corduroy: Don Freeman’s New York documents the artist’s love for his adopted home. Focused on moments of quiet and clamor, drama and humor, Don Freeman illustrated the humanity of the great metropolis—a big place where even a small, stuffed bear can find a friend.

CITY LIFE
When he first arrived in New York in 1928, Don Freeman eked out a living playing trumpet at night and took classes at the Art Students League during the day. At the League, he studied under famed Ashcan School artist John Sloan, who became a lifelong friend and mentor. He also took his first class on lithography and immediately fell in love with the printing process. Freeman found that “the lithographic medium fitted my temperament to a T-square… it set me to work translating into prints all the random sketches I had gathered about town.” His prints and illustrations were published in The New York Times, Christian Science Monitor, and Life magazine.
Freeman was an enthusiastic observer of life in his adopted city. The human drama of New York—its dense streets packed with people—enthralled him, and he wandered the city filling his sketchbooks with what he saw. Every person, no matter their race, age, or economic status, was essential to the beauty of New York. He believed that “Being part of this seething, turbulent, fabulous family [of New Yorkers] was a privilege that brought with it a living proof… that all people could live together if they but would.” Freeman’s paintings, drawings, watercolors, and lithographs capture the city’s still, isolated moments as well as its energy and chaos.

STAGE LIFE
Don Freeman came to New York to study art, but he could not escape the lure of another early love: the theater. Fascinated by the drama and spectacle of the New York stage, the penniless young artist turned into “a Broadway beachcomber,” searching the sidewalks and lobbies of theaters for ticket stubs that he could use to gain entry during intermission. One night, with the help of a popsicle seller who catered to the chorus during intermission, he slipped backstage. From this special vantage point, he set about capturing moments that were hidden from the audience’s view, revealing the methods behind theater’s magic and the backstage workers who made it possible. After Freeman sold his first theater caricature to the New York Herald Tribune for its Sunday drama section, his drawings started appearing in the New York World, Theatre Magazine, and other publications. He also found work illustrating theatrical posters and programs. “It was almost unbelievable to me that such a privilege could also be a way of earning a living,” he remarked, “seeing the plays and being paid for it at the same time.” Freeman carried his passion for the stage into his later career as a children’s book author. His books Pet of the Met (1953) and Hattie the Backstage Bat (1970) are set in the much-loved spaces he knew so well.

Thanks for sharing. Loved learning so much about the author as well as celebrating the beloved Corduroy.