This New Orleans based story is a jazz infused mystery adventure perfect for listeners ages 8-12. It’s a throwback to the old school Nancy Drew escapades but with a modern flair and told through the lens of an quirky and brave young black girl.

VIVA DURANT AND THE SECRET OF THE SILVER BUTTONS 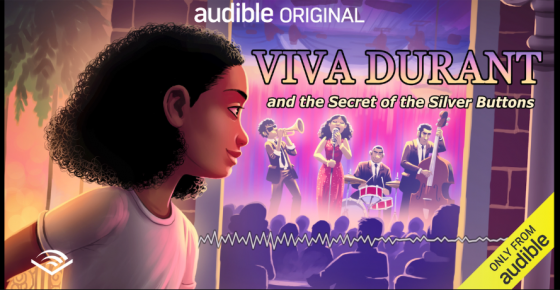 After Gram reads Viva an article in the local paper about a missing treasure related to the world-famous song, “Miss Mary Mack,” Viva traverses the Crescent City on an epic adventure to solve the mystery. Along the way she meets some of the city’s most colorful characters as her journey takes her to the French Quarter, a jazz club, a creepy cemetery, and even the circus. Can Viva rise to the occasion and solve this musical mystery? Listeners will find Viva Durant and the Secret of the Silver Buttons a joy to listen to!
Order VIVA DURANT on Audible.

Ashli St. Armant is a vocalist, writer, and arts educator, based in Southern California, where she was born and raised. She is the founder of Leaping Lizards Music, a music and theater education program for students, TK-12. She is a professionally trained vocalist and actor who attended the Orange County High School of the Arts and holds a degree in Child Development from Saddleback College.
Alongside teaching, writing, and raising her two sons, Ashli tours with her band, Jazzy Ash and the Leaping Lizards, a jazz band for young audiences. Together they have produced four albums featured by NPR and L.A. Times, and have performed at numerous venues including Lincoln Center and Sprout Network (NBC). Viva Durant and the Secret of the Silver Buttons is Ashli’s debut audio original., and sets the path for her new venture into children’s literature.

Bahni Turpin is a Los Angeles based actress with many television and film credits in addition to being an award-winning narrator. She is honored  to have been awarded the Audie award for Best Solo Female Narration in 2015, Audible Narrator of the Year for 2016, and American Library Association’s Voice of Choice for 2017.
In 2018 Bahni won best solo female narration again, and was also inducted into the Audible Hall of Fame. She is a two-time Odyssey Award winner, and is also named one of Audiophile’s Golden Voices for 2019.
Connect with Bahni Turpin on Twitter.

the best book in the world.