From The Horn Book: We Need Diverse Jewish and Muslim Books: A Conversation

In recent years, we have seen a welcome increase in books that center diversity in race, class, ability, sexuality, and more. As members of religious minority groups (Sadaf is Muslim, Heidi is Jewish) — and at a time when both Islamophobia and antisemitism are on the rise (deeply troubling and alarming statistics are available from the Anti-Defamation League and the Council on American-Islamic Relations) — we believe it is vital to include religion in conversations around diverse books.

When a group of people is vilified, one way of fighting back is to take ownership of the narrative, and that’s what we have done through our work separately — with, respectively, KitaabWorld’s “Counter Islamophobia Through Stories” effort and the “Love Your Neighbor” recommendations from the Association of Jewish Libraries (AJL) — and, now, the two of us in discussion with each other.

SADAF SIDDIQUE: KitaabWorld began as an online platform in May 2016 with a focus on building bridges by showcasing multicultural children’s literature, primarily centered on South Asia. Through our online bookstore, curated content, and community outreach, we worked toward increasing representation and stories of marginalized communities, including Muslims.

Muslims are a diverse set of people and have been part of the fabric of American society since even before the formation of the republic. Muslims were part of the crew that came with Columbus, and forced migration through slavery also brought them to the United States. Following the U.S. government’s “­Muslim ban” in January 2017, KitaabWorld launched an online campaign, Counter Islamophobia Through Stories, as a proactive approach to engender empathy and friendship and to change negative stereotypes of Muslims. 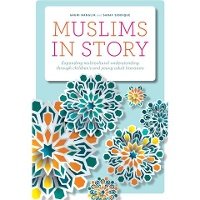 The campaign provided a framework for educators to introduce positive stories about Muslims into their classrooms and communities. Using curated booklists on four different themes, from exploring the everyday to looking at inspirational role models, we wanted to provide multiple points of access and engagement. We also included author interviews; personal stories; and articles, reports, and other resources on Islamophobia. This campaign later grew into a book titled Muslims in Story: Expanding Multicultural Understanding Through Children’s and Young Adult Literature. There is a growing awareness by publishers about the need to reach out to Muslim authors and illustrators and tell their stories.

Read on for the full article: We Need Diverse Jewish and Muslim Books: A Conversation on The Horn Book.

Recognizing School Librarians in April and All Year Long

Rosa Parks: In Her Own Words | Library of Congress Exhibit