On StoryMakers, Rocco chats with author, Anthony Manna, and illustrator, Donald Babisch, who tell us how they teamed up to create LOUKAS AND THE GAME OF CHANCE, a story based on a Greek folktale and fleshed out into a full fantasy!

Watch and join our Coin Design Challenge! Create coin from a mythical country of your own making or design a coin based on the characters and lands described in LOUKAS AND THE GAME OF CHANCE. Show us your creations on Twitter using #loukascoins! 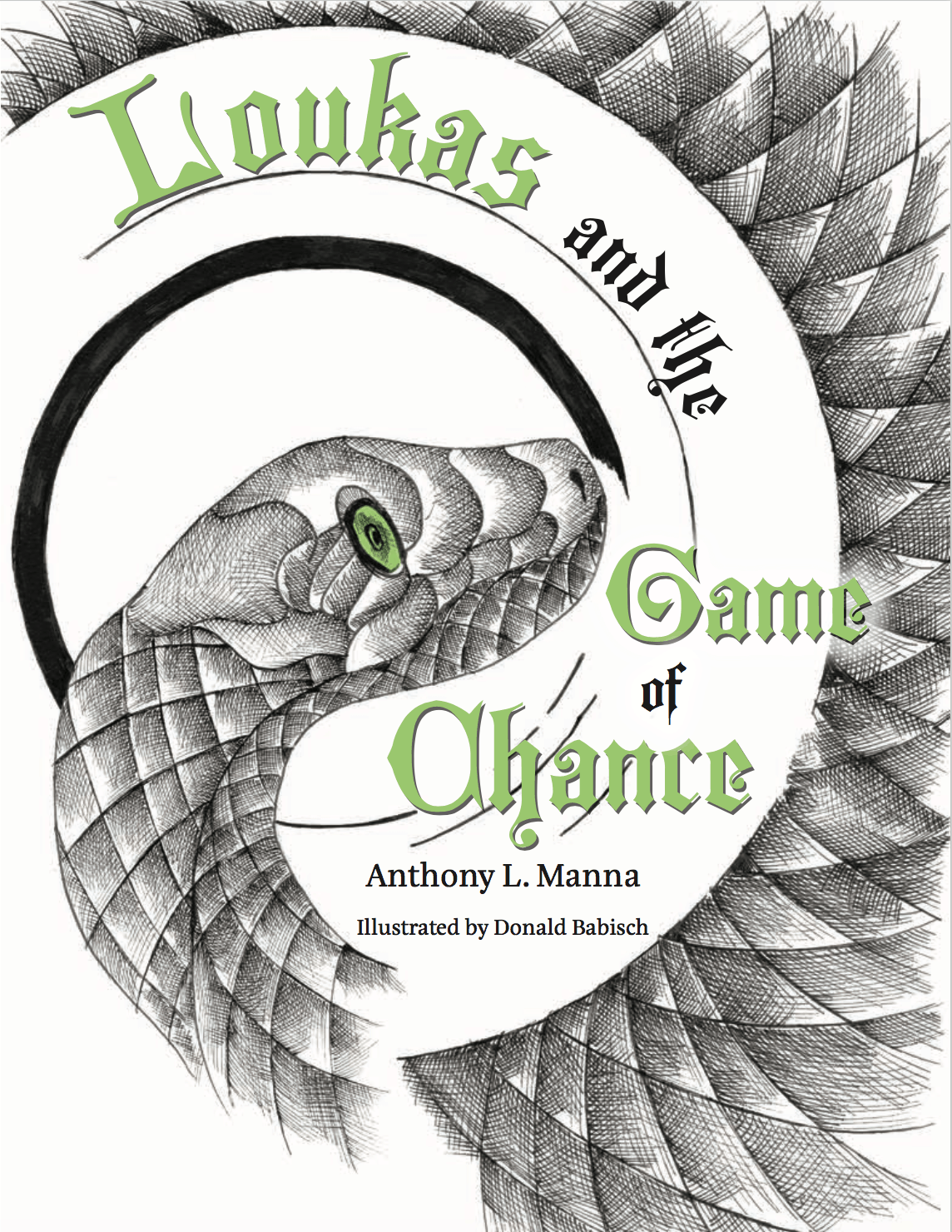 While Loukas is playing his flute at the seawall one day, he befriends a mysterious talking, dancing snake that rewards him with fortune and favor. Some years later, tempted by greed and pride, Loukas loses all his riches and his family. He must now set off on a treacherous journey through a frightening forest filled with suspense and strange creatures to find Destiny, her son Ilion, the Sun, and her daughter Luna, the Moon. These celestial guardians will surely allow him to reverse his misfortune, restore his honor, and win back all that he loves and treasures, won’t they?

A reimagined Greek folktale, LOUKAS AND THE GAME OF CHANCE is illuminated with dramatic and evocative pen and ink drawings that provide an ideal backdrop for the dark intrigue that fills this haunting story of human struggle, courage, and resilience.

Find Teachers Guides and Activities for LOUKAS AND THE GAME OF CHANCE here: 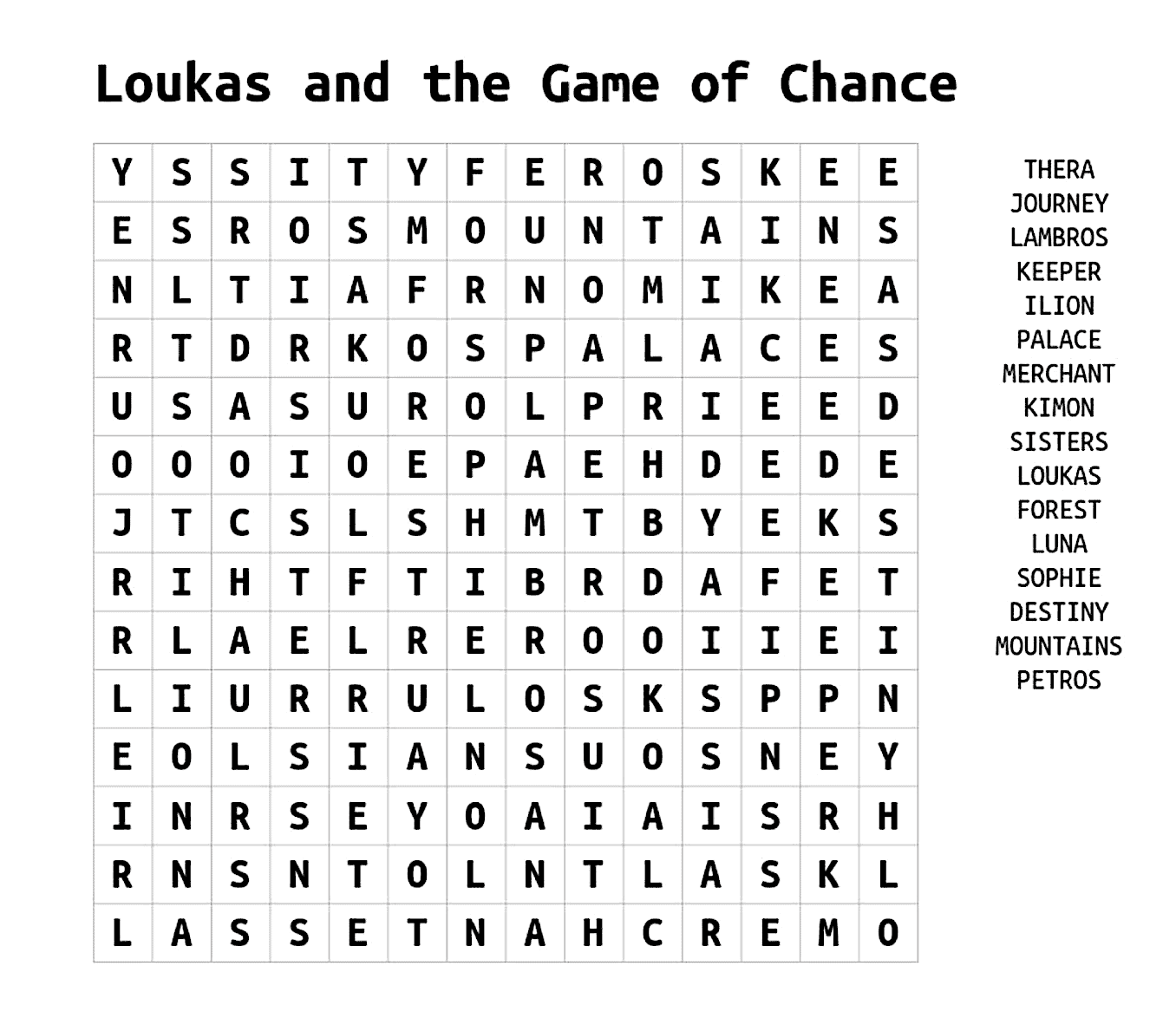 Anthony L. Manna’s first collaboration with Soula Mitakidou, Mr. Semolina-Semolinus: A Greek Folktale, illustrated by Giselle Potter, was an ALA-ALSC Notable Book, a Marion Vannett Ridgway Award winner, and a New York Public Library Best Book for Children. Another collaboration of theirs, The Orphan: A Cinderella Story from Greece, illustrated by Giselle Potter, was a Bank Street College of Education Best Book of 2012. They also collaborated on the anthology, Folktales from Greece: A Treasury of Delights. Anthony has worked with children and teens in drama and storytelling, has been an actor, a director of children’s theater, a vehicle repossessor, and a janitor, and has taught in schools and universities in Turkey, Greece, Albania, and the United States. He divides his time between Ohio and Arizona.

Donald Babischis an artist and art educator who has worked with children in elementary and middle school. An alumnus of New York University’s graduate art education program, he is a former adjunct instructor in the art education program at Youngstown State University in Ohio. The author of articles in several art education journals, Donald is both the author and illustrator of Who is That Peeking in My Windows? Having received an Honorable Mention for a felted piece he exhibited at the Crooked Tree Arts Center in 2014, he is now exploring and creating large needle felted portraits, scenes, and allegories. An avid gardener, he lives in a log cabin in northeast Ohio.

this is so cool

StoryMakers with Philip Stead IN MY GARDEN

We had so much fun taping with Susan to celebrate her new #picturebook I AM ME illustrated by #kidlit super-⭐️ @peterhreynolds AND the upcoming SALLIE BEE WRITES A THANK YOU NOTE co-written with @courtneysheinmel and illustrated by @heatherrossinsta! So, stay tuned! 📺✨