If sunflower seeds were all you were allowed to eat for breakfast, lunch, AND dinner, you might get fed up too! On this episode of Read Out Loud join author Robin Newman as she tells the story of Phil, Jim, and Harry — three peacocks on a mission for mac ‘n cheese — in NO PEACOCKS!

Here’s a treat for you: The NO PEACOCKS! activity guide! 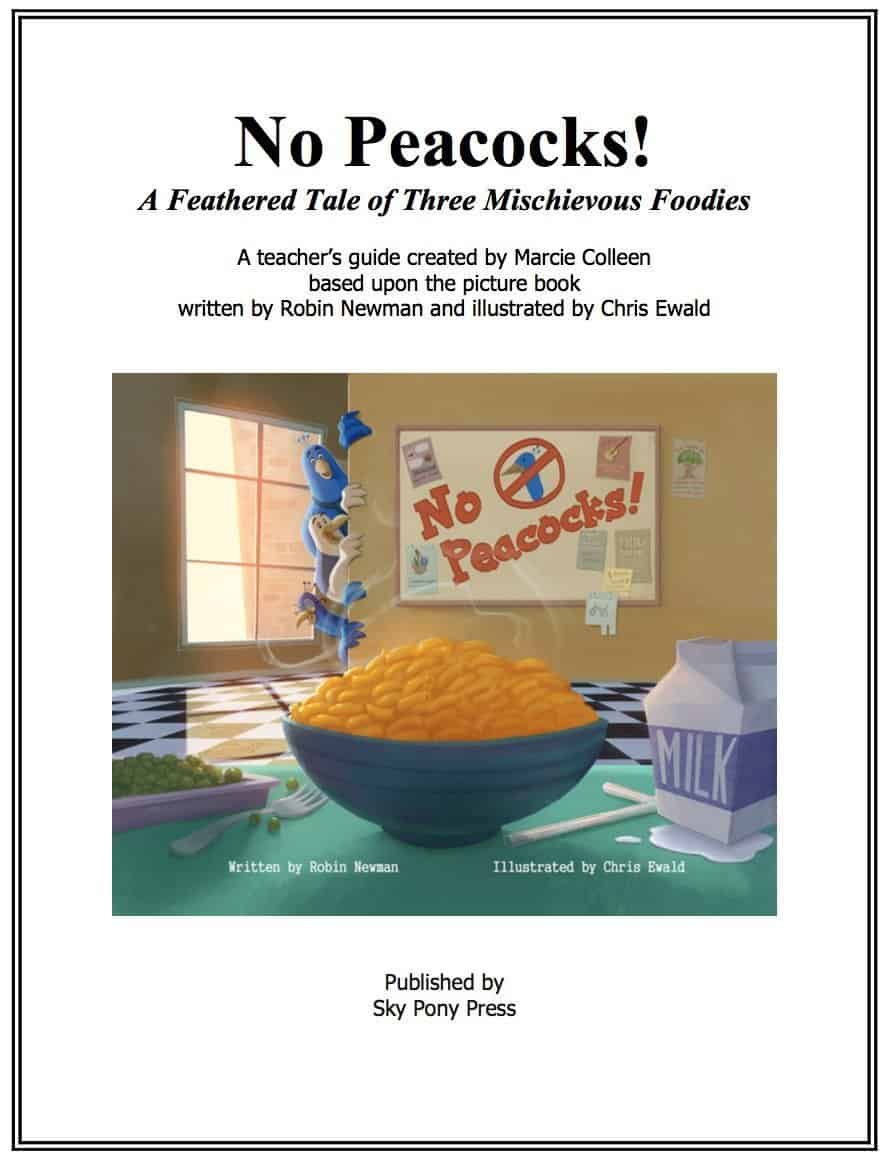 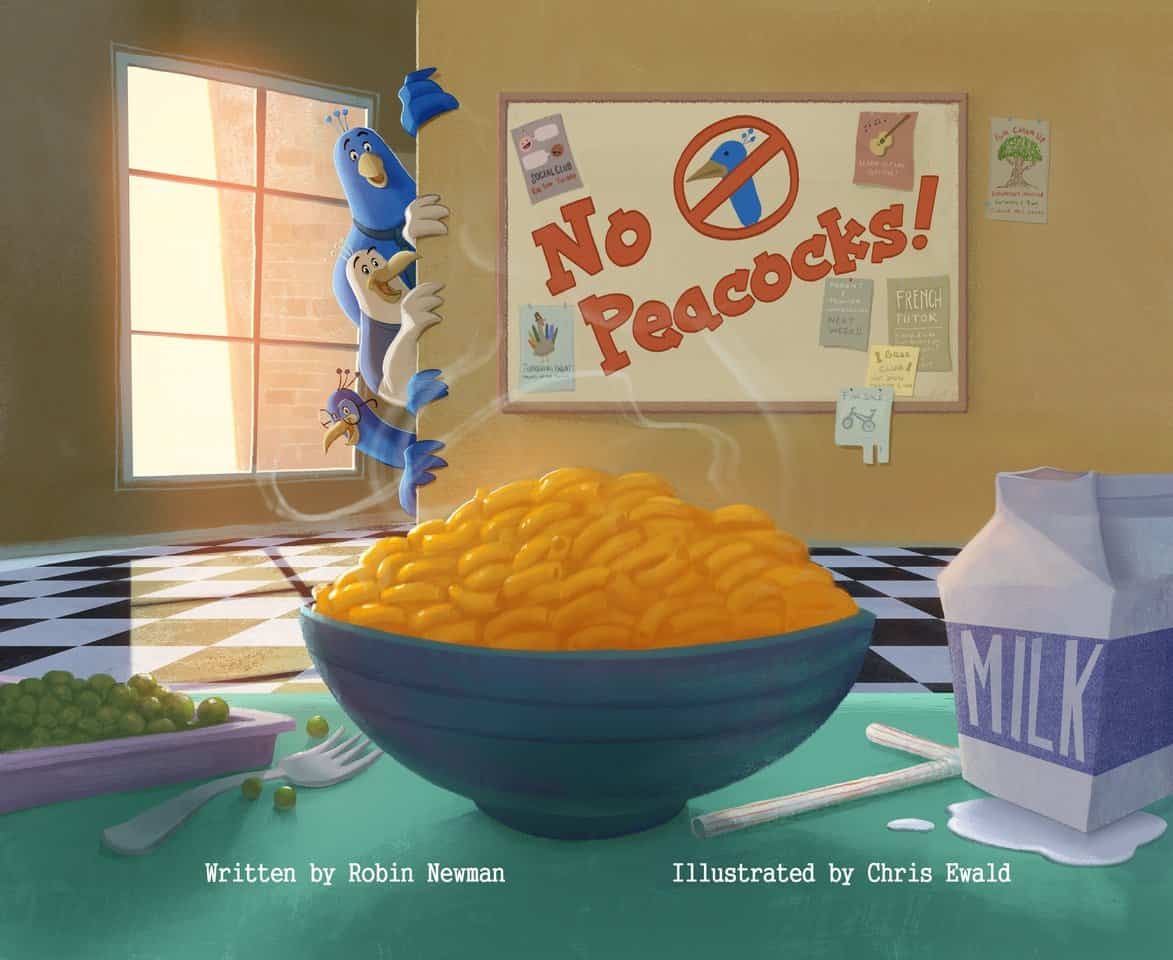 Every day, Phil, Jim, and Harry are fed sunflower seeds by the staff who care for them at The Cathedral Church of St. John the Divine. But one day, they decide they’re sick of them. They make a break for the New York City streets in search of pizza or Chinese
But everywhere they go, they’re told “No peacocks!” So they try to get an ooey, gooey, delicious meal closer to home. But how are they going to sneak into the school’s dining hall and get their wings on the school’s world-famous mac ‘n cheese? A little plotting, some stolen disguises, and help from the students, and mission mac ‘n cheese is a go! Will the peacocks finally get their mac ‘n cheese? Or will their cover be blown, forcing them to fly the coop?
Inspired by the real-life beloved, celebrity birds living on the grounds of The Cathedral Church of St. John the Divine, and brought to the page in bold, bright style, No Peacocks! is a hilarious romp and a perfect read-aloud.

Raised in New York and Paris, Robin is a graduate of Bryn Mawr College and the City University of New York School of Law. She’s been a practicing attorney and legal editor, but she prefers to write about witches, mice, pigs, and peacocks. She’s a member of the Society of Children’s Book Writers and Illustrators, National Writing Project’s Writers Council, and the Bank Street Writers Lab. She lives in New York with her husband, son, goldfish, and two spoiled English Cocker Spaniels.

I am an illustrator and concept artist currently working in games and animation. I have an idea, I draw it, rinse and repeat.

I always KNEW this book would be beautiful to look at and fun to read…and it is! :D

i love this book.

yeah it is amazing

I think you’re all doing good.

I love your book and made me feel like I can try new things too. I thought that the book was amazing and a little funny.

I think that you dont need to be someone else.

Love it a lot

i liked that book made me feel like I should eat more things.

I love you book!

I really liked my book a lot

yum!I love mac and cheese and this book was so good!

march 4
wow i can eat good

I love this book so I might read it every day

I love mac and cheese.❤

I LOVE THE BOOK CAN U READ ANOTHER BOOK PLZ;-)

Hi this book was so amazing

📺✨STAY TUNED!✨ A brand NEW episode of #ReadySetDraw ✍️starring Ruth Chan (Ohtruth Illustration), illustrator of HOW OLD IS MR TORTOISE?, is coming your way on MONDAY SEPTEMBER 26th from 7AM ET on KidLit TV! 🐢📚✨

This #BannedBooksWeek KidLit TV & Biracial Bookworms are standing with the American Library Association to say “Books unite us. Censorship divides us.” Here is our list of #bannedbooks everyone should read: www.kidlit.tv/banned-books-everyone-should-read/

✨NEW EPISODE!✨ On #StoryMakers get to know author and illustrator, Ali Bahrampour, creator of MONSTERS IN THE FOG and A PIG IN THE PALACE.

📚MONSTERS IN THE FOG is a story about how things aren't always what they first appear to be. Ali shares some of his sketches and discusses why it's important to question our preconceived thoughts about everything from people to places.

🧿 Learn about how Ali weaves bits of his Iranian upbringing into his picture books and follow his tips for drawing a "monster" in the fog of your own! ✍️