What’s Up? with Veera Hiranandani — In the Kitchen with PHOEBE G. GREEN

KidLit TV’s got a new show for parents & educators!
We’re dropping by to ask kidlit’s top authors and illustrators “What’s Up?”


Join Veera in her kitchen for this episode of What’s Up?!

Then make this yummy recipe from Phoebe G. Green! 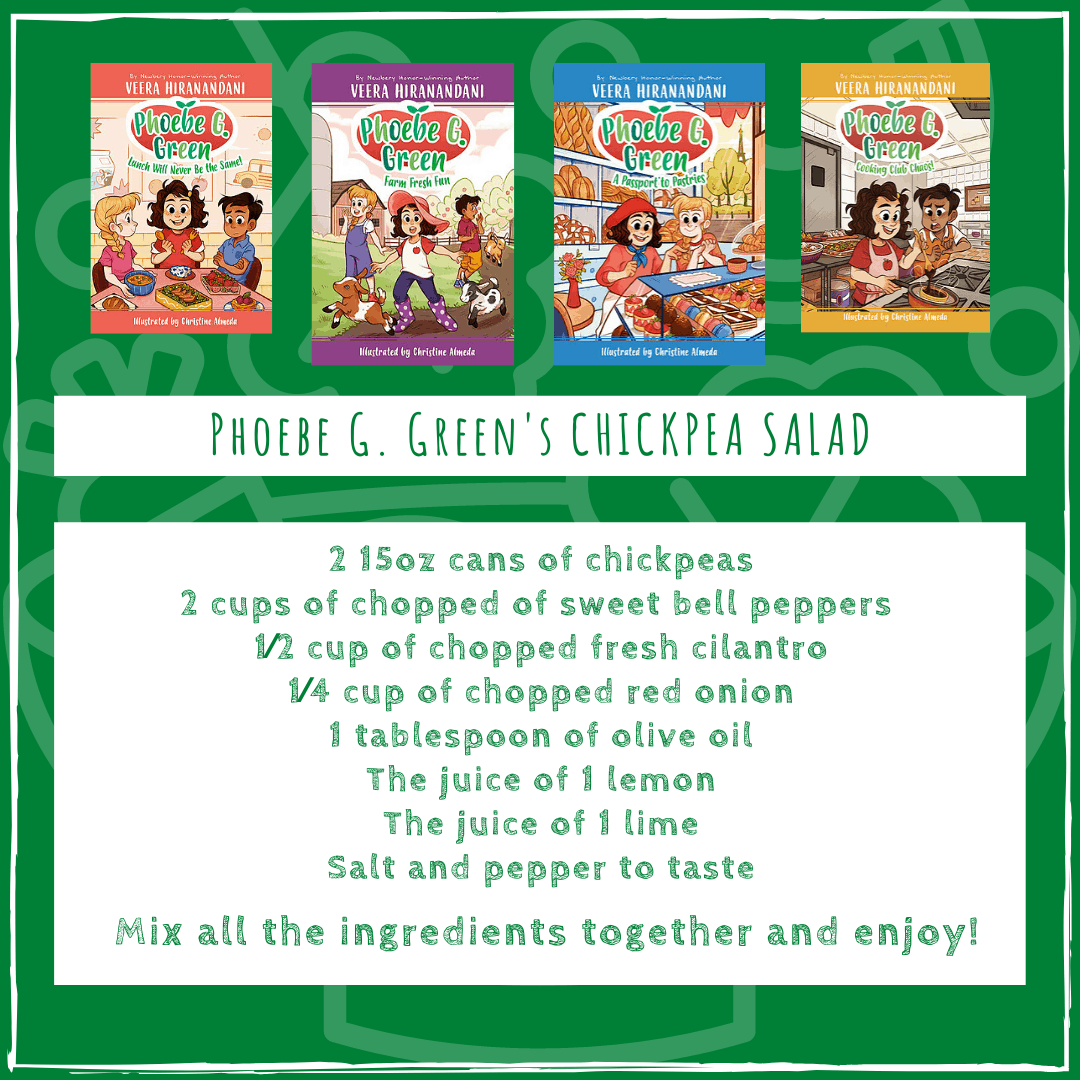 PHOEBE G. GREEN HAS BEEN RERELEASED
WITH BRAND NEW ART FROM CHRISTINE ALMEDA!
PHOEBE G. GREEN Lunch Will Never Be the Same! #1
Phoebe loves her pet fish, Betty #2 (named after Betty #1, may she rest in peace), making lists, and her best friend Sage. But when Camille, a tall French girl, arrives at school with unusual lunches, Phoebe’s friendship with Sage doesn’t seem so important anymore. Thanks to Camille, Phoebe discovers goat cheese, butter lettuce, and cilantro (although she’s convinced that’s not a real word). She’s determined to get invited to her new friend’s house for dinner to see what other mysterious food Camille eats. But what about Sage? Can Phoebe make a new friend and keep an old one?

Kirkus:
“With all the foodies out there, this delightful series deserves a long shelf life…and many more courses.”

School Library Journal:
“Fans of Junie B. Jones and Judy Moody or those who like realistic fiction and friendship stories will enjoy…”

ABOUT VEERA
Veera Hiranandani is the author of The Night Diary (Dial), which was featured on NPR’s Weekend Edition and is a New York Times Editor’s Choice Pick, The Whole Story of Half a Girl (Yearling), which was named a Sydney Taylor Notable Book and a South Asian Book Award Finalist, and the chapter book series, Phoebe G. Green (Grosset & Dunlap). She earned her MFA in fiction writing at Sarah Lawrence College. A former book editor at Simon & Schuster, she now teaches creative writing at Sarah Lawrence College’s Writing Institute and is working on her next novel.

Join Klaas for #ReadySetDraw on @kidlittv and learn to create your own guards 💂🏽💂🏼‍♂️💂🏿‍♀️-- tall or small -- whatever suits your version of this "hairy tale"! Watch on @kidlittv or follow this link: www.kidlit.tv/KlaasVerplanckeReadySetDraw ... See MoreSee Less

Join Klass for #ReadySetDraw on @KidLitTV_NYC and learn to create your own guards -- tall or small -- whatever suits your version of this "hairy tale"! 🎥 Click here: www.kidlit.tv/KlaasVerplanckeReadySetDraw

Robin Newman & Susan Batori have teamed up to create a hilarious NEW BOOK featuring two woodland creatures who are — shall we say— struggling to find a compromise. 🐻 Don't miss our 🌟FEATURED BOOK TRAILER🌟: DON’T CALL ME FUZZYBUTT! created by the @kidlittv TV Team!

Watch through the link in our bio or here: www.kidlit.tv/DontCallMeFuzzybuttBookTrailer

Did you know that April 2nd is #InternationalChildrensBookDay? It’s a global #kidlit celebration & it marks the birthday of Hans Christian Andersen! 🎉🎂

@readyourworldmcbd’s @BeckyFlansburg has rounded up the best #booklists to help you get the party started! Find it on the @kidlittv website or follow this link ow.ly/mZMo30rBKDr