There isn’t a second to lose! One of Santa’s reindeer has gone missing. Everyone knows Santa needs EIGHT reindeer to pull his sleigh. If Santa and the other seven can’t find Prancer, there may never be another Christmas! Find out where Prancer has gone on this holiday episode of Read Out Loud as Rocco reads the picture book classic, WHERE’S PRANCER by Syd Hoff. 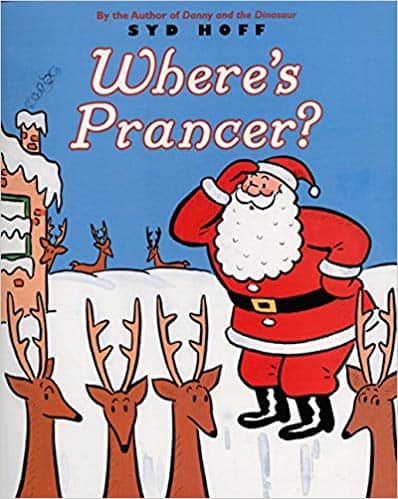 WHERE’S PRANCER? by Sid Hoff
As Santa Claus is giving his reindeer a treat after a long night of delivering presents, he notices something alarming. Prancer has disappeared! Where in the world could he be? In the Philippine Islands? Or Sweden? Or Sioux City, Iowa? Santa and the other reindeer have got to find him in the twinkling of an eye, because if they don’t, there may never be another Christmas…
This holiday classic from the creator of Danny and the Dinosaur, available for the first time in a full-color paperback edition, will spread Christmas cheer to a whole new generation of readers.

i love that book and you

That is a good one!!

Santa is the guy who gives you presents.

hi my name is kayden

how do you read it

You can’t. You just have to follow along with the video.

I love your books

all of you are chrismas lovers

I love these books

I love the Christmas season too!

i am reading the book

yo i am a 5th grader

why is ther no girls

Good question! I read that in early December, boy reindeers shed their antlers. Only girl reindeers have antlers in the winter, so maybe they’re all girls! :-)

hi my name is Hadley i liked the book

I loved this story

He said “And I match Santers outfit

I love Where is planter

I am just about to read it.

its not good its super duper good

i have nevre seen it be for

so cool i love it

i love chistmas books so much

I like the part where Prancer went to Philadelphia alone.

Prancer is my favorite reindeer! He is lucky to be found.

Dasher is my favorite reindeer! he strong.

Dasher is my favorite reindeer, cause he strong.

Click here to check out the games at Bad Kitty: https://www.badkittybooks.com/activities-and-resources/

I wish I had a copy of that book

The best Christmas book ever

So good I love it

I loved it my fav part was when one of the reindeer found him but it was just his reflection!!!?

I’m not to shure

this book is nice and im glad i read it

I love the book ❤️❤️

I love this book to

I love this book now I’ve read it

i love this story

hi how are you

iam s0rry that this is late , L love Prancer,

I like this book. Thank you for reading it. Please read more books.

you are so cool and fun i love it

Read Out Loud WIGGLES, STOMPS AND SQUEEZES CALM MY JITTERS DOWN