StoryMakers with Tom Phillips THE CURIOUS LEAGUE OF DETECTIVES AND THIEVES: EGYPT’S FIRE

On StoryMakers, enter the world of THE CURIOUS LEAGUE OF DETECTIVES AND THIEVES with series author Tom Phillips. Mystery solving, natural history museum living, and speakeasy root beer float drinking are all a part of this madcap middle grade series! Learn about Tom’s inspirations and about being a writer with dyslexia.

Have you ever dreamed about living in a museum like John Boarhog, the main character in THE CURIOUS LEAGUE OF DETECTIVES AND THIEVES series? If so, tell us where and why in the comments below! 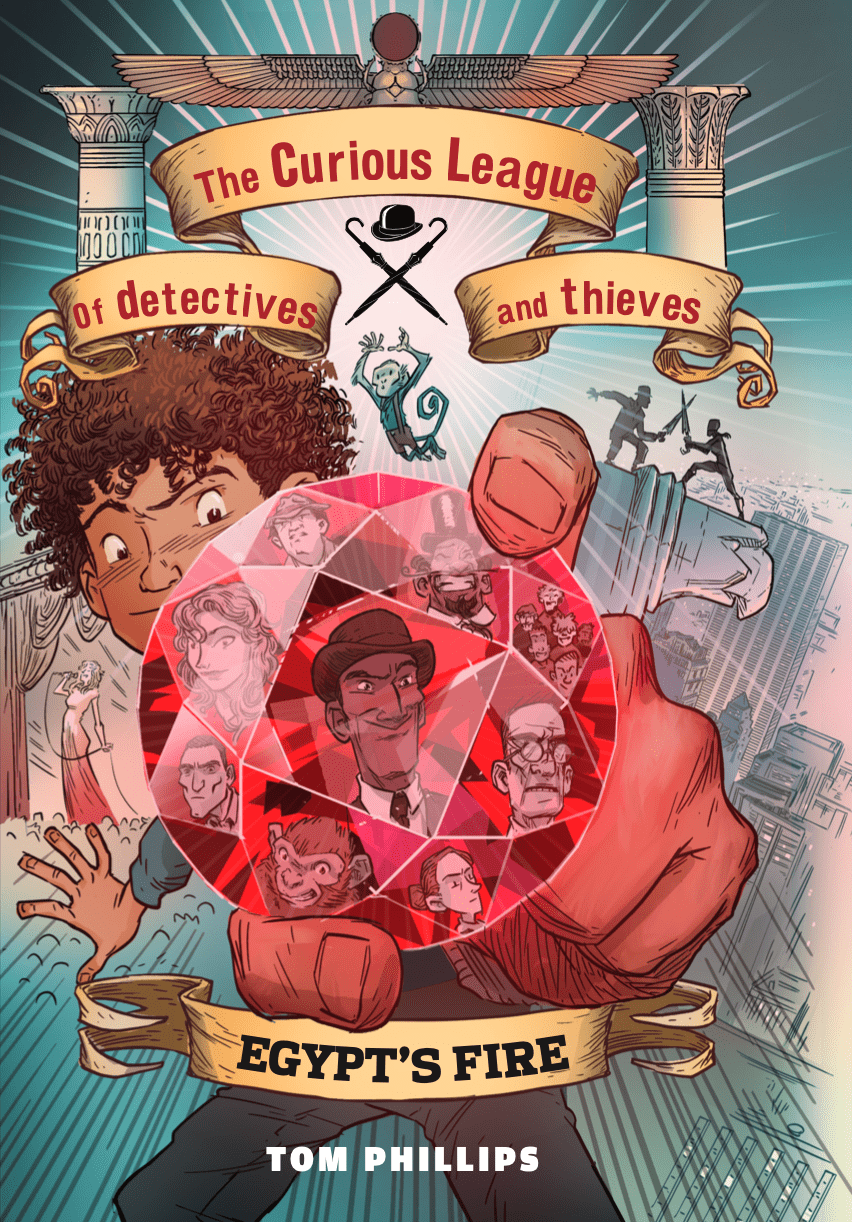 Accused of stealing a rare ruby, a down-on-his luck twelve-year-old is swept into the orbit of the world’s greatest detective you’ve never heard of to track down the true culprit. A madcap middle grade mystery series starter for fans of A Series of Unfortunate Events and Enola Holmes.

After twelve-year-old John Boarhog’s mom dies, the last thing he wants is to be schlepped off to the Jersey Home for Boys, where kids are forced to make skinny jeans for hipsters and are fed nothing but kale. Instead, he makes himself a snug home in the ceiling of the New York Museum of Natural History, where he reads anything he get his hands on and explores the artifacts after hours. But when a rare Egyptian ruby—the highlight of the museum’s new exhibit—goes missing, John is accused of the crime. That is until the unpredictable Inspector Toadius McGee sweeps in to wrestle control of the case, certain that the true culprit is a notorious criminal he’s been tracking for years.
John quickly becomes the Watson to Toadius’s Holmes as they race from Broadway to back alleys to a speak-easy that only serves root beer. And along the way, John uncovers secrets about his own past, including that he’s a lot more involved in this web of endearing ne’er-do-wells than he ever could have imagined.

A love letter to classic middle grade, Egypt’s Fire introduces a remarkable new duo that will steal your heart as surely as it leaves you begging for their next grand adventure.

As a dyslexic child, Tom Phillips eagerly listened to any story his mom or older sister would tell him. Today, he writes books that kids can not only enjoy on their own, but also can be read aloud and shared. Tom employs his passion for storytelling as an artist and video editor in Los Angeles, California. His work includes editing for the acclaimed LeVar Burton Kids, and he is currently at work on a screenplay for a major studio. An armchair detective and Sherlockian, he is an obsessive watcher of crime dramas. Tom can often be found walking his dog, Dr. Watson, with his wife Autumn.

StoryMakers with Anna Svetchnikov | WISH AWAY series & THE LEGEND OF ASTRID