Cover Reveal! THE YEAR WITHOUT A SUMMER by Arlene Mark

KidLit TV is honored to reveal the book cover for

THE YEAR WITHOUT A SUMMER

• KidLit TV Exclusive! •
Get a sneak peek at an excerpt of
THE YEAR WITHOUT A SUMMER
Click the image below! 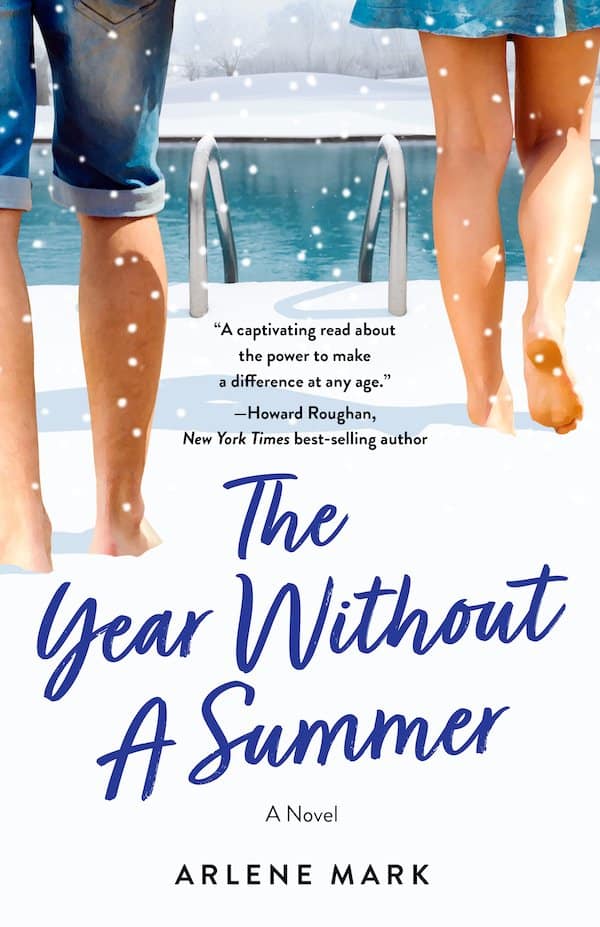 “A touching story that intertwines the complex dynamics of both our relationships and the climate system … reminding us of the power of curiosity and scientific discovery in forging a better life. The rich storyline reminds me of my own love of skiing at a young (and older!) age.”
––John Fasullo, Ph.D. Project scientist, National Center for Atmospheric Research – Boulder, Colorado

Eighth graders Jamie and Clara are opposites in almost every way: Jamie is a snowboarder threatened by failing grades, secretly consumed with worry about his brother fighting a war in Afghanistan, while Clara is a high achieving newcomer having survived Hurricane Katrina, helping her mother and younger brother adjust while feverishly trying to reach her father who returned to a devastated Puerto Rico with no phone service. Yet despite their differences, they remain good friends….that is until their differing opinions and perspectives on life erupt into an argument about the impacts of an 1815 volcanic explosion that led to deep snow in June, disrupting their science class and jeopardizing their academic futures. Result—debate the facts in front of the class or have their grades altered. Neither can afford this.
Working competitively on the science debate project, both teens come to see that today’s current man-made disasters are one of the greatest threats to their future. As their turbulent home lives exacerbate their tumultuous teen lives, concern and empathy for each other grow as they work together in surprising ways to empower their generation against global warming.

Praise for THE YEAR WITHOUT A SUMMER

“A wonderful and captivating read about courage, commitment, and the power to make a difference at any age.
Don’t go another day without reading The Year Without a Summer…”
––Howard Roughan,  New York Times bestselling author

“What will happen if empathy vanishes, and we only consider our own limited points of view? This timely book is an engaging contribution to young people’s understanding of global warming, raising important, interesting, and powerful questions for young readers. The Year Without a Summer demonstrates vividly that people are more than what they seem,
and that everyone has a heartache.”
––Selene Castrovilla, author of  Seeking Freedom: The Untold Story of Fortress Monroe and the Ending of Slavery in America

“Two main characters from different cultures discover their ordinary but differing views about lots of things. I love how they find ways to disagree, even agree sometimes, and summon courage to face all that comes their eighth-grade way including natural,
man-made, and family disasters. I couldn’t put the novel down.”
––Miguel Garcia-Colon, Greenwich Library, Byram Shubert Branch Manager

Arlene Mark was born and grew up in steel country in western Pennsylvania before making her way to New York City to begin her career. After working in fashion, marrying, and committing herself to family, she lived in London, Caracas, and Toronto with her husband and three children before settling in Greenwich, CT. She holds an MA in special education and, a certification in school psychology, and interned at New York State Psychiatric Institute. Her work has appeared in Highlights for Children, Spider, the Magazine for Children, Skipping Stones, Adolescence, Their World and Greenwich Magazine. She is also the author of To the Tower, A Greenwich Adventure and co-authored Paraverbal Communication with Children: Not Through Words Alone and has been served as a contributing editor for The Greenwich Time, offering articles about children’s emotional lives. Her eight grandchildren are enthusiastic fans. When not writing, Arlene can be found lobstering with her husband, Reuben, traveling to third world countries in the Global South and visiting schools there, reading (mostly books for kids), or and screening current films.

Excerpted with permission from THE YEAR WITHOUT A SUMMER by Arlene Mark. © 2022 by Arlene Mark. Published by SparkPress, a BookSparks imprint, a division of SparkPoint Studio, LLC.

Cover Reveal! THE STORY OF UKRAINE: AN ANTHEM OF GLORY AND FREEDOM