Read Out Loud: BALLOONS OVER BROADWAY 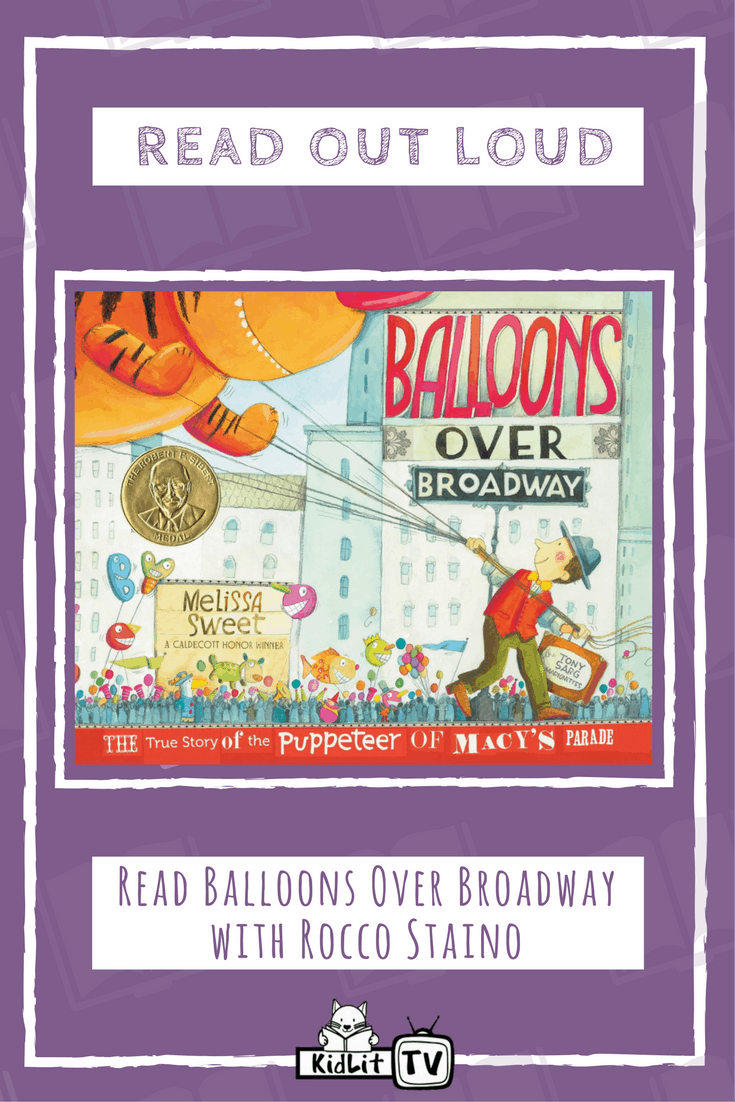 Balloons Over Broadway
By Melissa Sweet

Melissa Sweet has illustrated nearly 100 children’s books from board books to picture books and nonfiction titles. Her collages and paintings have appeared in the New York Times, Martha Stewart Living, Madison Park Greetings, Smilebox  and for eeBoo Toys, which have garnered the Oppenheim and Parents Choice Awards. She has written and illustrated three books: Balloons Over Broadway: The True Story of the Puppeteer of Macy’s Parade which garnered many awards including: the  2012 Sibert Medal, the NCTE Orbis Pictus Award, an ALA Notable Book, the Flora Stieglitz Straus Award from Bank Street Books as well as the Cook Prize which honors a STEM (science, technology, engineering and math) picture book; Tupelo Rides the Rails, and Carmine: A Little More Red, a New York Times Best Illustrated, 2005.

Loved this wonderful and inspiring story! So exciting to learn how this Macy’s Day parade came about.

I love your videos

IT WAS THE BEST THING THAT COULD EVEN MAKE IT THE FIRST amazing thing ever.

yeah its a great book i enjoyed it

HELLO I AM YOUR BIGGEST FAN I LOVE THIS VIDEO

The book shows that any body can do anything.

That story i live it beacouse is asome

This book shows that people can do anything

that was pretty good and i loved it to

I really enjoyed this book cause it taught that you can do anything if you put your heart to it and that if you make a mistake it doesn’t mean that you should give up. I think if i can find this book somewhere not just online i will buy and read it to my friends and family members. :) :) :)

I really enjoyed this book.

I did not get to read it

I like how the author Expressed the feelings of the book instead of being bland when he read it and this story was also really good, because this is showing if you try you have a chance of succeding

wow tony is so cool

I really liked it.

I really liked the video

How many people are in the parades? :/

hay. do you hafe to whare mascks if you can go to the prade in pesin?

Thank you! We make them just for you!

I really like this book i read it every day

I liked this story it’s amazing

All the books are amazing

This book was so fun amazing

I love this book I remember when i was in 4 grade the teacher read this. i am in 5 grade now and I still love it! this is a really good book

i like the book because its showing people we care for every body in the world.

this is the best book read:):)

I love the way it was made

I love the way they have the Macy’s Day Parade and I love the book HAPPY THANKSGIVING IF I DON”T SEE YOU!!

Hey readers! I’m the author and illustrator of Balloons Over Broadway. I love your comments! And I love how Rocco read this story. Tony Sarg was amazing and inspiring. My favorite part is how Sarg wanted the balloons to move like a marionette, how colorful they were, and how outrageous it was to see them so high up. No one had ever made a helium balloon before!
The parade has been going strong for 95 years.
I’m not sure how many people are actually in the parade, but, I do know that over 40 million people watch the parade all over the world on Thanksgiving morning every year.

I’m going to send this to my great-grandchildren.

Hi and I like the story ha ha ha ha.

This book was amazing. I read this book when I was a first grader and it was fun now I still like this book.

Loved it so much

I love this book so much and I really really enjoyed I read it and I mean watched it like about 30 something times it’s really good.!Thanks for creating this

i love the book it was good

I love your books!

This book was nice

I loved the book

I’m doin a thing about this book