Meet the Creator of Olympians!

– Find out about one controversial illustration that almost got him into trouble.
– Learn how librarians and educators support comics as an art form.
– Watch him create a new Superhero, LIVE on set!

These are our picks for BEST KIDLIT QUOTE 2015 from George’s interview.  What are yours?

Zeus is like the WORST husband EVER. –– George O’Connor

Hermes is the smartest guy in Olympus. He only uses his powers for mischief. He’s like the bugs bunny of Mount Olympus. –– George O’Connor

Enter to win original art from George O’Connor: each signed book has a special illustration inside! 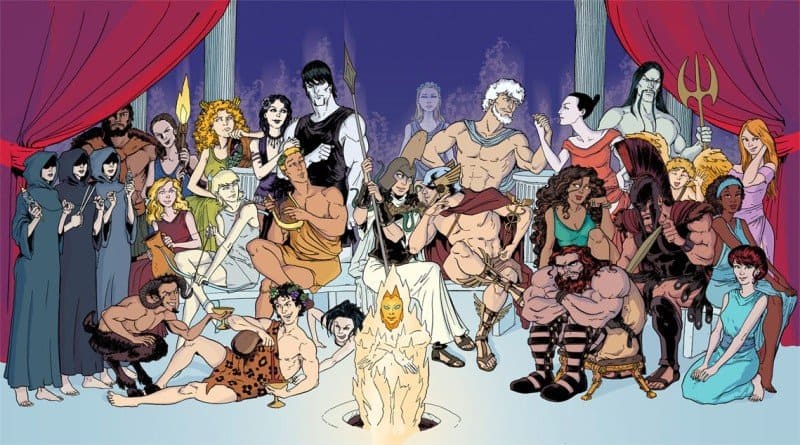 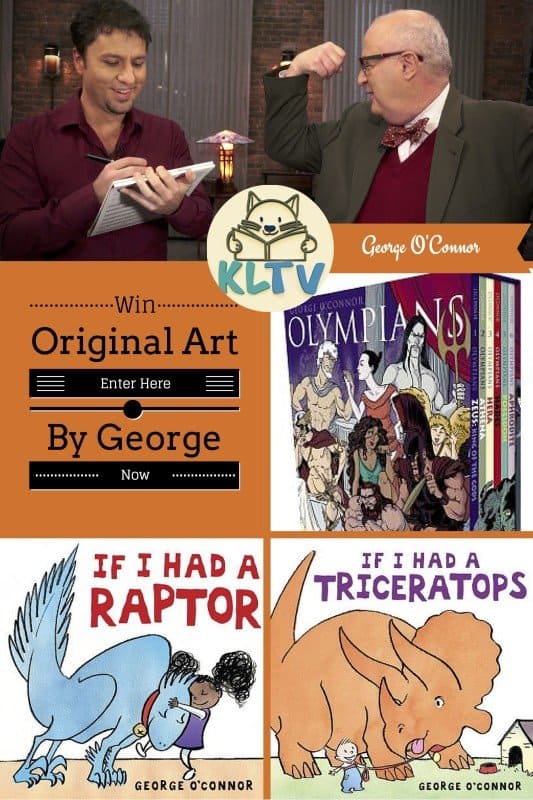 From Macmillan: George O’Connor is the author of several picture books, including the New York Times bestseller Kapow!, Kersplash, and Sally and the Some-thing. His debut graphic novel, Journey into Mohawk Country, was published by First Second, as was Adam Rapp’s Ball Peen Hammer, which O’Connor illustrated. Ares is his most recent installment in his series, The Olympians. 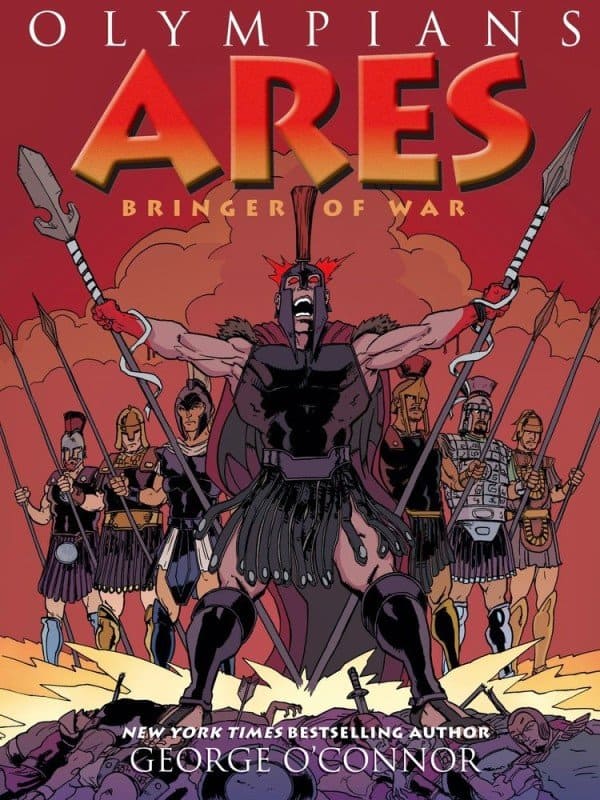 Ares is out now! The myth continues in the tenth year of the fabled Trojan War where two infamous gods of war go to battle. The spotlight is thrown on Ares, god of war, and primarily focuses on his battle with the clever and powerful Athena. As the battle culminates and the gods try to one-up each other to win, the human death toll mounts. Who will win this epic clash of power? And how many will have to die first?

This sturdy boxed set includes paperback editions of the first six Olympians books by multiple New York Times–bestselling author/illustrator George O’Connor.
Holy Hera, it’s got a free poster!
Collectors will adore this package, with lots of new artwork and the complete Olympians family tree on the free poster. Plus, the boxed set is also a great way for classrooms to get all six books at once.
Aphrodite Almighty, what a value!

A spunky and imaginative little girl dreams of the best pet ever — a fuzzy baby raptor to snuggle.

Our heroine can’t think of anything better than bringing home a baby raptor — all teensy and tiny, fluffy and funny. It would cuddle and play, stalk birds and dust bunnies, and curl up on laps. In short, it would be the perfect pet! Readers may notice striking similarities between the raptor’s behavior and that of a more common house pet. But whether their first love is dinosaurs or kittens, little people with big imaginations will definitely warm to this perfect picture book.

With deft visual humor, a New York Times best-selling author-illustrator imagines how awesome it would be to have a pet triceratops living in your backyard.

Wouldn’t it be great to have a triceratops for a pet? If you had one, it would probably be your best friend. It would always want to play with you, and it would always know how you’re feeling. On dark and stormy nights, if your triceratops got scared, you could let it sleep in your room. True, a triceratops is a little on the huge side, but that just means more pet to love, and more pet to love you right back! Just imagine your very own pet triceratops running out to greet you at the end of the day. Ooof! Wouldn’t that be the best thing ever?

Hope you entered to win the prize. George drew each book’s titular god onto the title page!

Absolutely love George O’Connor and The Olympians! Can’t wait to get our hands on Ares Bringer of War!

How can a historian resist a book about the Olympians?

Right? I was a myth nerd, too! Thank you to my great teachers.

These are simply the best. If you want to get a child hooked on reading, give them George’s books. The Olympians is simply brilliant!

My whole family loves The Olympian series. George is the best.

The signed edition is AWESOME! Hope you entered the raffle.

Learning your craft at the children’s bookstore? What a great experience!

How fun to get to know George O’Connor! So many costumes. :)

And one of the best quotes in kidlit: “Zeus is like the worst husband EVER!”

Please feel free to pass along the titles of this series — !

Love this so much!

Amazing talent here! Thanks for the post and sharing.

You are welcome, Danielle. So happy you liked the interview!

Loved this interview…George seems to have his whole self into his art and craft…that’s what makes his work so vibrant.

He leans into it, right?

Thanks for this wonderful interview and I’d love to own his original art!

It’s beautiful – he creates it all so effortlessly, too!

So inspiring and engaging

He is talented, and very generous with his audience!

A Visit with Don Tate … 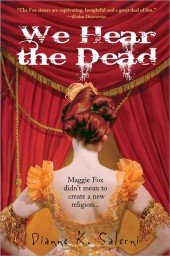