This just in: KidLit.TV has partnered with the Children’s Book Council (CBC) on the coverage of their red carpet event the Children’s Choice Book Awards (CCBA)! The KLTV team will be promoting the award event on May 4th co-hosted by Jon Scieszka and Betsy Bird. The all-star roster of presenters includes Jackie Woodson, Brian Selznick, Sophie Blackall, Matt de la Peña, and more. We are excited to be covering the CBC Children’s Choice Book Awards, so check out our Red Carpet video of the event. This amazing event celebrates kids and the literary community for striving to discover what books children enjoy most.

Wondering what the CBC Children’s Choice Book Awards are and how they originated?

As the only national book awards program whose winning titles are selected by children and teens, the Children’s Choice Book Awards is an exciting event for authors, illustrators, educators, book lovers and, most importantly, the voters of the event: kids!

In 1974 the Children’s Choices, a joint project of the International Literacy Association (ILA) and the Children’s Book Council, and teams of ILA-affiliated educators in five geographic regions, had students read and vote for their favorite books. The votes from the five regions (from roughly 12,500 children) were collected and organized. The five titles with the highest number of votes in each category (K-2, 3-4, 5-6) become the finalists for the Children’s Choice Book Awards.

In 2008 the Children’s Book Council and Every Child A Reader launched this program with one steadfast goal in mind: To provide young readers with an opportunity to express their opinions about books, select their favorite books, and to help develop a new-and-improved reading list that will motivate children around the world to read more and foster a love of reading. By 2014 young readers cast over 1.2 million votes online!

This year the Children’s Choices Program supplied over 36,000+ children with newly published children’s and young adult trade books and, as in 1974, had them vote for their favorites. Those children individually selected each finalist for the K-2, 3-4, and 5-6 Book of the Year categories. Teensread.com conducted the Teen Book of the Year whose finalists were chosen by 4,000+ teens. On February 19, 2015, the finalists for the Children’s Choice Book Awards were announced!

The 7 categories from kindergarten to teen books will have one winner who will be decided by young and brilliant readers across the nation. Their votes will be placed online at ccbookawards.com from Tuesday, March 17, 2015 through Sunday, May 3, 2015. If you have kids at home, they can vote, too!

Who do you think will win this year? Make sure your little bookworm places his/her vote in the following categories:

KINDERGARTEN TO SECOND GRADE BOOK OF THE YEAR

THIRD TO FOURTH GRADE BOOK OF THE YEAR

FIFTH TO SIXTH GRADE BOOK OF THE YEAR

TEEN BOOK OF THE YEAR

Winners will be announced during the 96th annual Children’s Book Week (May 4-10, 2015). So make sure you place your vote today!

Who do you think will be the grand prizewinner? Let us know your thoughts and stop by for more updates on the Children’s Book Council’s Children’s Choice Book Awards! 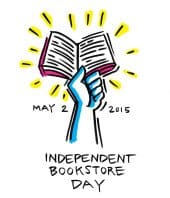 How to Make the Most of Independent Bookstore Day