To support New York’s Bank Street Center for Children’s Literature KidLit.TV will be live streaming the Irma Black Award & Cook Prize Ceremony to be held at the Bank Street College on Thursday, May 14, 2015 at 9:30 A.M.

Two awards will be presented at the ceremony:

The 2015 Cook Prize is awarded to the best picture book that teaches the values of science, technology, engineering, and math (STEM). The Cook Prize was established in 2012 and honors two groundbreaking Bank Street educators—Don Cook (Graduate School of Education) and Michael Cook (School for Children). It also encourages the brilliance in publishing books on STEM topics for elementary children.

You might be wondering what STEM is. STEM stands for:

STEM is a hot topic everywhere from school administrators and legislative committees to  PTA meetings and online forums. STEM books cover science, technology, engineering and math subjects while educating its readers in a fun, interactive way that will engage kids and teens in libraries, schools and at home. The KidLit.TV team is also supportive of STEAM books which is STEM + Art = STEAM. These books will encourage the new and exciting ways of learning about art, design and literature in the 21st century.

Students from around the world will determine the winners of the 2015 Irma Black Award and the 2015 Cook Prize.

The four picture book finalists for the 2015 Irma Simonton Black and James H. Black Award for Excellence in Children’s Literature were selected by third and fourth graders at the Bank Street School for Children. These students read through a selection of 16 read-aloud books decided by a jury of teachers, librarians, reviewers, graduate faculty, Bank Street College alumni, and members of the Bank Street Children’s Book Committee. This year, former Irma Black Award winner Fiona Robinson (What Animals Really Like) will deliver the keynote.

The finalists for the 2015 Irma Black Award are:

The 2015 Cook Prize finalists are: 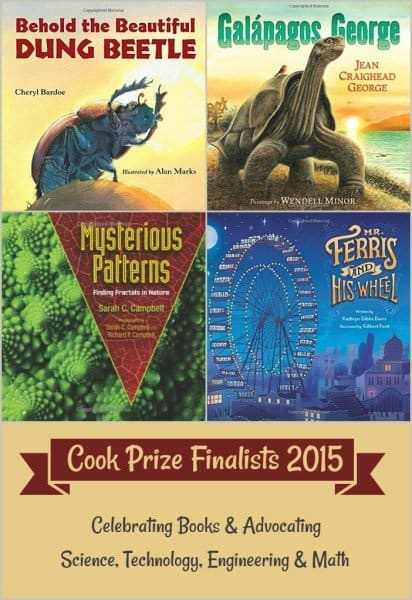 Who are your favorite finalists for the Irma Black Award and Cook Prize this year? Let us know! And make sure you stop by the KidLit.TV website to watch the live-streamed event!

Weeding Out Good Ideas…From the Not-so-Good