StoryMakers | R Is for Rocket: An ABC Book


Growing up in a family of artists, engineers, and teachers has its benefits. As a child, New York Times bestselling author and illustrator Tad Hills was constantly encouraged to revel in his creativity. He wrote his first book at the age of eight as a gift for his parents. Besides writing, he’s always had a fondness for building things  — namely detailed Halloween costumes for his children — and uses this passion as a way to visually demonstrate storytelling.

“The feeling of accomplishment and the fun that I had in writing and illustrating that book is part of the reason why I write and illustrate kids books today.”  — Tad Hills

Tad’s literacy focused Rocket series evolved from a 2008 Publishers Weekly cover. What started out as a pup with a bibliophilic bird atop his nose has led to six books and counting. Tad’s first book in the series, How Rocket Learned to Read was a New York Times bestseller. Eight years later, R Is for Rocket: An ABC Book is the sixth book in the line, and features a surprise guest from Tad’s Duck & Goose series.

You’re invited to accompany StoryMakers host, Rocco Staino as he interviews Tad about tales of Halloween costumes past; how a playful wheaten terrier launched a series; and what’s next!

We’re giving away three signed copies of R Is for Rocket: An ABC Book. One lucky reader will win their own plush mini Rocket via a random drawing too!

a Rafflecopter giveaway
All entrants must be at least 13 years old and reside in the United States.

BOOKS
From Random House Kids
R Is for Rocket: An ABC Book – Learn the ABCs with Rocket, the dog who inspires kids to read and write! This irresistible alphabet book from the creator of the New York Times bestsellers How Rocket Learned to Read and Rocket Writes a Story is sure to appeal to kids, parents, teachers, and librarians. From finding acorns, to balancing on a ball, to offering a cookie and a crayon to a crow, readers will love exploring the wonderful world of Rocket and his friends. The whole cast is featured, among them the little yellow bird, the owl, Bella the squirrel, and more. Even Goose from the beloved and bestselling Duck & Goose books makes a cameo appearance! With charming and delightful scenes for every letter, here’s an ode to the wondrous, mighty, gorgeous alphabet.

From School Library Journal
“PreS-Gr 1—Rocket the dog and Goose, from the “Duck & Goose” series (Random), both appear in Hills’s latest picture book. As they play outside with their friends Bella the squirrel and Owl, they encounter a variety of animals whose activities are described in sentences that use alliteration. (“Rocket rests by the river in the rain./Bella sits on a stump. ‘I’m glad I have this sock,’ she says”) Every page is given its own letter, and those letters are written in bold text when they appear at the beginning of a word. The humor is subtle; the situations playful. (“Fred frolics with fireflies in the field”; “Owl jumps for joy”).The oil paint and colored pencil illustrations include full pages and spreads, and large spot art. A cheery alphabet chart appears on the reverse side of the cover. VERDICT An endearing introduction to the alphabet.” — Tanya Boudreau, Cold Lake Public Library, AB, Canada

COMING SOON! Duck & Goose: Let’s Dance, is an oversize board book with a downloadable song, written by Lauren Savage, owner of the northern California children’s bookstore and event space, The Reading Bug.

ABOUT
Tad Hills was raised by his science teacher mother, and engineer father in Norwell, Massachusetts. A deep love of nature and the arts was instilled within him at an early age. From time to time his mother brought home new friends that were furry, feathered, or scaly. When Tad wasn’t entertaining his beastly guests he spent much quality time with his siblings; building forts and anything else that came to mind.

Throughout his childhood Tad’s creative pursuits were encouraged by his grandmother — with whom he drew, painted, and wrote — and many adults in his life. Tad’s mother saw to having a play room where Tad and his siblings could play, read, and build.

Tad attended Skidmore College where he pursued a degree in art. In the late 1990s Tad began illustrating books for Lee Wade, then a VP and creative director at Simon & Schuster. Lee is Tad’s wife, and co-founder of Random House imprint Schwartz & Wade, with her friend Anne Schwartz.

He counts his two children amongst his best teachers. Their fearlessness when it comes to art inspires Hills’ work. Also, they’re the lucky children who got to wear Empire State Building and Leaning Tower of Pisa Halloween costumes.

Tad and his family live in a little old house in Brooklyn, New York. 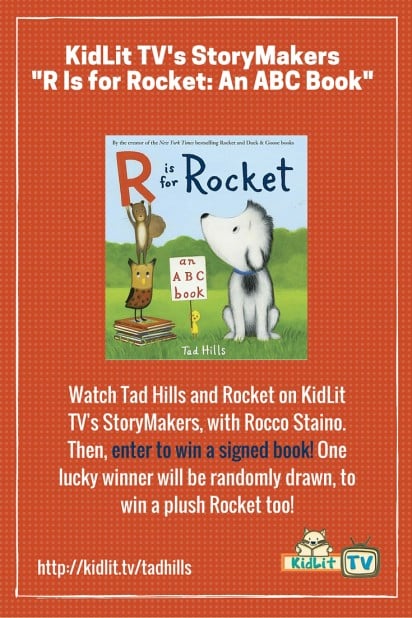 Where the Magic Happens: Children's Illustrators Open up their Studios 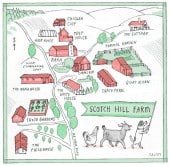