The countdown to KidLit TV’s first birthday party continues with more exciting announcements. You’ve already heard about KidLit Radio, our website redesign, and our book trailer service, but today you’re going to be the first to hear about several other projects!

Roxie Munro is one talented artist. Recently, Roxie created a tribute to KidLit TV’s headquarters at 112 Franklin Street in TriBeCa, NYC. KidLit TV’s Founder, Julie Gribble collaborated with Roxie and asked her to paint the street as it would have appeared in 1926, in memory of her father who was born in that year.

The painting will be unveiled on Monday, November 16, at KidLit TV’s birthday event! Until then, be sure to get the inside scoop from Roxie, and discover the process of making this beautiful piece of art come to life.

What’s the story behind this masterpiece?
The creative idea-woman Julie Gribble contacted me in early June about an idea she had for her cool KidLit TV studio. We met a few days later to discuss it and decided to go forward…took a walk around the neighborhood — one of several she and I took, and the others my photographer husband Bo and I took later.

What was the process of making it?
The research was the toughest part. I did some rough sketches on site, and Bo and I separately did photography. Later in June, we went to the NYYP research branch for books (one published by the Tribeca Tribune), the NYPL picture collection (mainly for cars, clothes, subways etc of the period), the New York Historical Society, the Museum of the City of New York, and the MTA Museum branch in Grand Central. Glenn Gribble was great — he did a lot of internet research and found a couple valuable images. 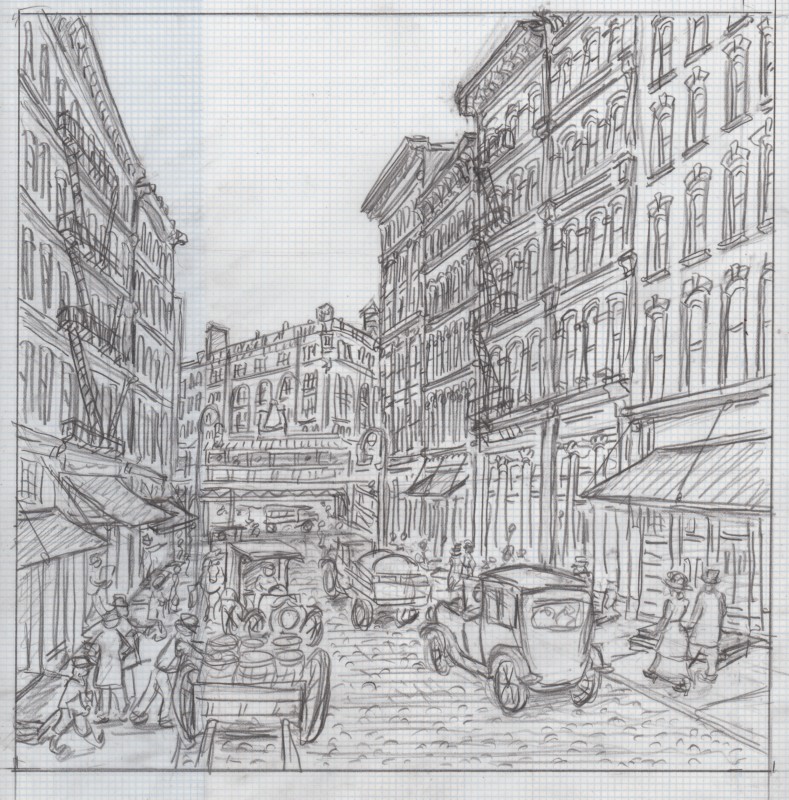 I submitted a super rough sketch to Julie in July, and a more finished one the end of August.

I ordered the stretcher to be made, and Bo and I lugged it back to my studio via subway. I transferred the sketch via pencil and then drew the lines again on the canvas in black paint.

You put so much detail into the piece. How long did it take you to finish? 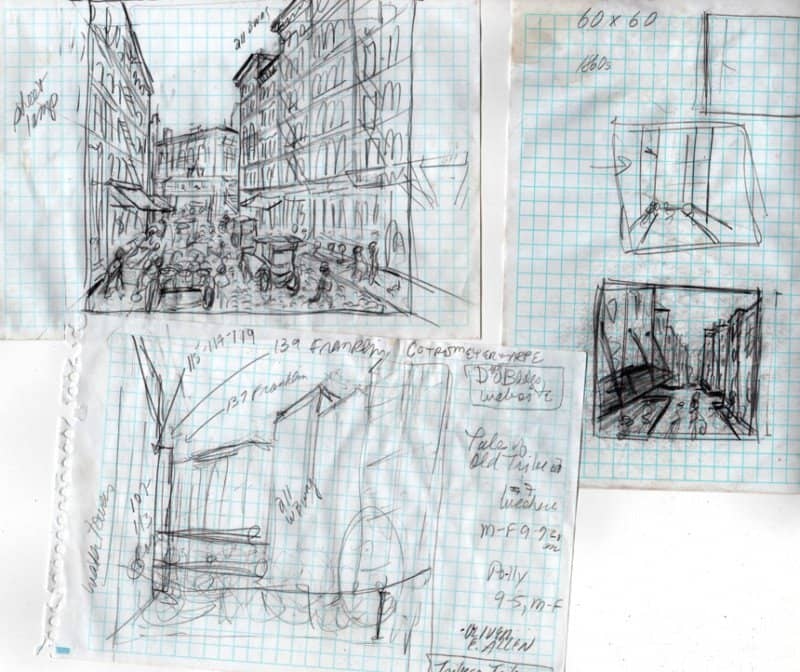 The sketches started in July/August, as did the research. The oil part began the beginning of September. I knew it had to be completed by the first week in November. I usually work six days a week, but had to come in at least four Sundays — at one point worked 20 days in a row.

Why do you think it’s important for kids to learn about illustration in schools?
Better that they learn about art, not just illustration (I went to four colleges/universities studying seven years in fine art!) Learning about and doing the arts are so important for so many reasons for children — it helps in so many aspects of life, of thinking, building habits…

Are you working on anything new right now?
Signed a new book contract for Holiday House a couple weeks ago (hint: it’s about art!). Have another big oil commission coming up after the holidays. Doing some speaking/traveling…

What do you think about KidLit TV over this past year?
I think it is a brilliant original idea, and just beautifully conceived and executed. I am incredibly proud to be associated with such a wonderful and important venture. It has enhanced my career and involvement in children’s books. A dynamic achievement by Julie and her team.

KidLit TV supports the views and reviews of parent and teacher bloggers but recently discovered a new point of view. When KidLit TV went to the Carle Honors this year we chatted with a few guests who talked about their grandkids and how they’re inspired by them to have fun. We also discussed how views on literacy and reading have changed over the years. Team members thought you’d like to hear a grandparents’ POV, too, so that’s just what we’re going to do!

Grandparents POV will focus on book reviews and how children’s literature has changed from your grandparents’ time to the present. It’s a fun new way to gain insight from someone who appreciates literature and has shared their passion for books over generations.

KidLit TV now has two new bloggers for this fun series — we’ll unveil who they are soon and what stories they have in store for you.

Marcie Colleen is a well-respected author and educator in the kid lit community. She’s a frequent presenter at conferences for the Society of Children’s Book Writers and Illustrators, as well as a faculty member for Kidlit Writing School. She creates highly acclaimed picture book and middle-grade novel Teacher’s Guides which have been recognized by School Library Journal, Publisher’s Weekly, and the Children’s Book Council. She will be producing Common Core State Standard (CCSS) aligned Student Viewing Guides for all StoryMakers episodes. They will be designed to engage students with each StoryMakers guest through comprehension and prediction questions, and written activities.

Because KidLit TV is the first multimedia platform for parents and teachers to connect with authors and their books, we knew Marcie would fit in perfectly with the team.

What are you looking forward to next? We’re ready to kick off the year with you and go on all kinds of kid lit adventures. It truly has been a Happy Birthday for us!

Can’t wait to see the painting! So excited to welcome Marcie to the KidLit TV team and can’t wait to use your guides for the books featured on KidLit TV videos. Looking forward to sharing the grandparents blog posts with my parents to use with my kids. So many exciting things happening at KidLit TV!

We’re psyched to have Marcie Colleen on board too, Kim! Roxie’s painting is beautiful and intricate as usual. We hope you’ll visit soon so you can see it in-person.

A Celebration of Picture Books With Julie Gribble