From The New York Times:

We’ve all been there at some point. Feeling a little out of place, unnoticed. If we were lucky, perhaps we met someone who, though very different, complemented us. Maybe we met a Jim and, like Huck Finn, left our familiar though confining small town; maybe we were Maude seeking companionship in a boy named Harold; maybe we were Joe Buck, the midnight cowboy in a city that never sleeps, who befriended the lowliest of the low, Ratso Rizzo.

Four new picture books tell stories about friends who vanquish loneliness. In the warmly illustrated “Little Elliot, Big City,” a lap-dog-size elephant named Elliot finds difficulty negotiating a metropolis — in his case, a glamorous 1940s New York City. He has trouble turning door handles, which he can barely touch with his trunk, and reaching into his freezer for food, which he pushes out with a broomstick. He can’t catch a cab; one splashes him as it drives through a puddle. What Elliot really wants is a cupcake — but the attendant at the bakery doesn’t notice him. In fact, no one notices this tiny elephant, despite the fact that he is white with blue and pink polka dots (he’s a precursor, in a way, to Joe Buck, whose cowboy hat and shirt barely catch the attention of New Yorkers). 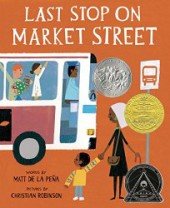