KidLit TV host Rocco Staino reads Maurice Sendak’s Chicken Soup with Rice on Read Out Loud. The rhyming book can be found on its own, or as a part of Sendak’s classic Nutshell Library which contains three additional titles; Alligators All Around, One Was Johnny, and Pierre. 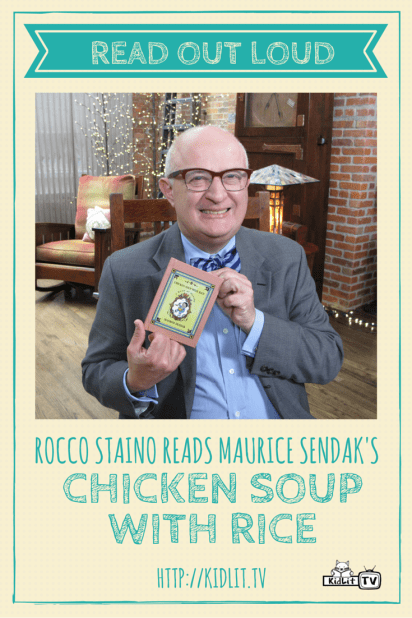 ABOUT ‘CHICKEN SOUP WITH RICE: A BOOK OF MONTHS’

Chicken Soup with Rice: A Book of Months
Written and illustrated by Maurice Sendak
Published by HarperTrophy

Collected in this charming book are twelve lilting rhymes and illustrations for the twelve months of the year, with chicken soup as their universal theme. Although the book starts in the middle of winter — presumably the best time for chicken soup — a case is made for the presence of chicken soup in every season. Even in the peak of the sultry summer: In August / it will be so hot / I will become / a cooking pot / cooking soup of course / Why not? / Cooking once / cooking twice / cooking chicken soup / with rice.

In this tiny volume, first published in 1962, the inimitable Maurice Sendak demonstrates his famous ear for language, rhythm, and word play and anticipates the strengths of his later children’s classics such as Where the Wild Things Are and In the Night Kitchen. Likewise, his illustrations here in Chicken Soup with Rice are, as always, playful and witty. Each rhyme is introduced with a decorative bar, framing the name of each month like a calendar. And by the “year’s end,” readers are convinced that all seasons / of the year / are nice / for eating / chicken soup / with rice!

An excellent read-aloud, demonstrating the progression of the year, seasons, and the power of poetry.

Illustrator and writer Maurice Sendak was born in Brooklyn, New York, on June 10, 1928. As a boy, Sendak and his older brother used to write stories. They then illustrated them and bound them into little books.

Sendak went to art school for a short time. But he mainly learned about his profession on his own. As a teen he spent many hours sketching neighborhood children as they played. These children were represented in A Hole Is to Dig (1952), a book by Ruth Kraus that brought Sendak his first fame.

Sendak’s ability to remember the sounds and feelings of particular childhood moments were demonstrated in his best-known work, Where the Wild Things Are (1963). He won the 1964 Caldecott Medal for this book. He later wrote and illustrated two companion books: In the Night Kitchen (1970) and Outside Over There (1981). The latter received a 1982 American Book Award. Sendak has said the three works are about “how children manage to get through childhood…how they defeat boredom, worries and fear, and find joy.”

Sendak has illustrated some ninety children’s books. In 1970, he won the international Hans Christian Andersen Medal for the body of his illustrated work. He was the first American to receive this highest honor in children’s book publishing. In 1996, U.S. president Bill Clinton presented Sendak with the National Medal of Arts

Ok Rocco can read to me anytime
I remember that book as a kid and loved it and I still love it
Thanks for bringing back my childhood memories Rocco
GOOD READING!
patte

Thank you for spotting that! It’s now corrected. xox

I LOVE THIS BOOK THAT I CAN EAT PAPER

The video is missing one of the fall months! Please check and edit it to include all months of the year! My students noticed right away ?

Thank you! We will work on that!

Some Fun 'Alice Through the Looking Glass' Activity Pages